The great switch off! £40bn wiped off Netflix value as subscribers desert the streaming service in droves

More than £40billion was wiped off the value of Netflix last night after subscribers deserted the streaming service in droves.

As Wall Street questioned whether the California-based giant is past its peak, shares tumbled 35 per cent in one of the biggest one-day falls for two decades.

The slump slashed the value of Netflix by just over £40billion to £75billion – some £155billion less than it was just six months ago. 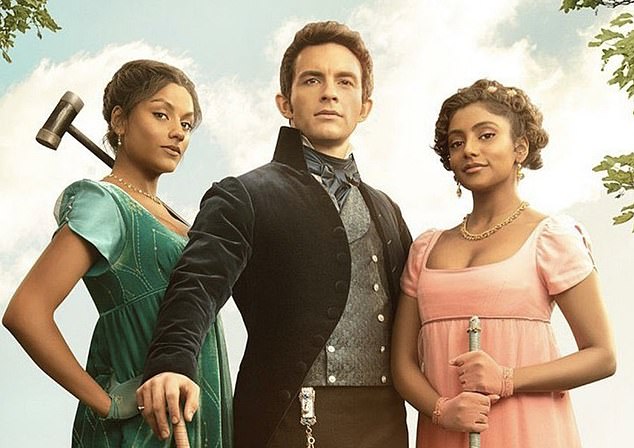 Falling out of favour? Bridgerton is a hit show on Netflix. yet subscribers have been deserting the streaming service in droves

The 67 per cent rout since November has seen the value of the stake held by co-founder and chief executive Reed Hastings fall by £1.8billion to less than £860million.

The sell-off came after Netflix revealed it lost 200,000 subscribers in the first three months of the year and would lose another 2million between April and June.

‘Netflix is a poster child for what happens to growth companies when they lose their growth,’ said Kim Forrest, at Bokeh Capital Partners in Pittsburgh.

Netflix bosses are now considering changes to the service they have long resisted – such as clampdown on password sharing and a new low-cost subscription supported by advertising.

The company estimates that around 100million households worldwide are watching its service for free by using the account of a friend or another family member.

The slide in subscriber numbers in the first quarter of the year – the first for over a decade – was a sobering comedown for a company buoyed two years ago when millions of consumers corralled at home were seeking diversions.

Netflix added 36million subscribers during 2020, by far the largest annual growth since its video streaming service’s debut in 2007.

But the end of lockdowns and competition from Disney+, Apple TV and Now TV have taken their toll just as the cost-of-living crisis erupted.

The suspension of the service in Russia also hit the business.

Laura Hoy, at Hargreaves Lansdown, said: ‘Streaming services are a dime a dozen, and standing out is expensive. Unlike rivals, Netflix doesn’t have much of a back catalogue of content.

‘The entertainment it’s serving up is getting more costly as it’s forced to build its own slate of hit shows.’

Moors Murders: The mum who died without finding her son's body despite campaign