ALEX BRUMMER: Liz Truss and Kwasi Kwarteng made enormous error when deciding they didn’t trust OBR enough to give their proposals a hearing 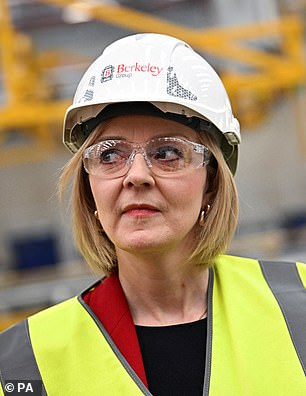 At the core of the recent volatility on financial markets has been a battle of ideas. On one side has been the orthodoxy of the Office for Budget Responsibility (OBR), the IMF, the OECD, the pre-Kwarteng Treasury and now Keir Starmer’s Labour Party.

On the other side are the Thatcherite Institute of Economic Affairs, monetarist economists such as Patrick Minford and those who believe that lower taxes and more creative regulation can lift growth.

Truth is that the two approaches are less far apart than one may think. As Oxford economics guru Professor Dieter Helm notes in the New Statesman, the combination of energy price subsidies and tax cuts is ‘like Keynesianism on steroids’.

It has a bit of Chinese central planning thrown in because of the Chancellor’s growth targets.

After all, it was John Maynard Keynes who came up with the idea that when the private sector isn’t boosting demand, the government must step into the breach.

Take, for instance, the ideas for reforming planning laws so that industrial zones can be freed up in the name of expansion, and more houses built.

This often plays badly because no one wants HS2 barrelling past their garden, or an estate on the edge of their preserved-in-aspic village. That is usually the case even if it means more derrieres on seats in the pub and homes for agricultural workers.

The idea that the existing order cannot be disrupted is risible. The key is sharing gains. If local mechanisms could be found, so that it is not just the landowner and the private sector housebuilder who win, then planning consent would be forthcoming.

At the extreme, a ten-year free, or deeply discounted, season ticket on HS2 for all those homes affected by disruption could well change minds. Or, in the case of new homes, a shining modern gym with an Olympic-size pool and/or lido, as the summers heat up, may be just the thing.

Tesco boss Terry Leahy recognised the need to share planning benefits when it was accused of concreting over this green and pleasant land with stores after the millennium. It was amazing how approving opposition became when a school and affordable housing were added to the project.

Liz Truss and Kwasi Kwarteng made an enormous error when deciding they didn’t trust the OBR enough to give their proposals a hearing. Yet it was previous chairman Robert Chote who at the start of Covid told the Commons Treasury committee that in wartime conditions, such as pandemics, letting borrowing balloon was acceptable.

Ukraine, the ensuing energy catastrophe, surging inflation and interventions proposed by the Truss administration fall into this category. The mistake would be tightening fiscal and monetary policy at the same moment.

The Government had little of which to be afraid. But leaving an assessment for ten weeks, when you are an administration in a tearing hurry, must be a blunder.

While on the economy, a quick word about the Bank of England promise to do what it takes to repair the gilts market. The £65bn time-limited intervention has widely been interpreted as Andrew Bailey stepping in to help the pound and the gilts market.

It was nothing of the kind. The Bank, with a Treasury insurance policy, rescued itself.

It was on its financial stability watch that Britain’s pension funds were tempted into complex derivative strategies by City-based banks and institutions who whipped some of the money offshore: out of sight and out of mind.

The fact that the pound has recovered and the long gilt yield plummeted was a collateral benefit.

It was not the purpose of the rescue.

Who says Britain is no longer an attractive place for investment?

That most emblematic of British car marques Aston Martin, with all the kudos which comes with being James Bond’s car of choice, has been a serial failure as a public company.

Never mind. Saudi Arabia, the UK’s oldest friend in the Gulf, and Chinese motor giant Geely have come to the rescue by taking up a chunk of a £654m fundraising issue.

It’s good to have admirers – even if the politics and human rights are not to everyone’s liking.