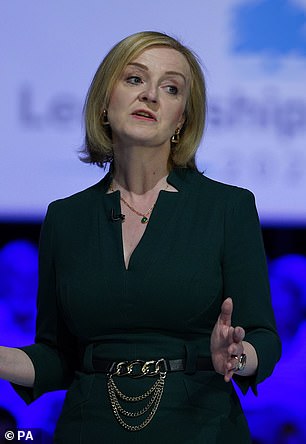 Long before Tory leadership favourite Liz Truss became a fan of ‘spike the national insurance hike’, it was clear that there were all kinds of problems with this hurriedly created tax.

The 1.25 per cent NHS and Social Care levy on employers and employees was portrayed as a fix for the UK’s well-established social care problems.

Yet much of the cash disappeared into the black hole of the health system without any formal plan as to how the money will be spent.

Before the then-chancellor Rishi Sunak amended the tax for lower paid workers in his spring statement, in an effort to help the lower paid, it was due to raise a chunky £16billion in its first year.

The Truss plan to reverse the surcharge has been criticised as inflationary because of its impact on borrowing.

That would be the case if the Bank of England chose to accommodate the extra borrowing by quantitative easing (QE) – printing money.

But the Bank announced last week that it will start reversing QE, by trimming its portfolio of bonds, from September as it moves to withdraw the punch bowl. Far from causing more inflation, removing the NIC surcharge could actually reduce price levels. As it is also levied on employers, it is yet another cost for firms. At a time when input and prices are increasing anyway, it offers an excuse to pass on the expense or even widen margins.

As the UK moves towards a slowdown, or even a recession, it is also a tax on jobs.

If it causes companies to stop hiring or leads to redundancy, it could contribute to higher unemployment. This will increase pressure on the public finances as welfare payments rise.

Truss will have to do more to help people on lower incomes as a further rise in the energy price cap comes into view in January. How easily critics forget that the Government has already lavished £37billion on the problem, with a chunky £15billion on those at the bottom of the income scale.

As much as one admires Gordon Brown’s passion for the cause of the needy, summoning back the Commons at this stage would only add to pollution in the skies.

The great audit firms have been found wanting again. PwC failed to show sufficient rigour in challenging BT over the way in which the £530m fraud at the group’s Italian offshoot was dealt with.

PwC has received a rap across the knuckles and has been ordered to pay a £2.5m fine by the Financial Reporting Council.

Auditors face perennial conflicts in their work and too often come down on the wrong side. Too often, audit partners are reluctant to cause bother for directors since executives are, in the first instance, responsible in paying fees even if they are notionally approved at annual meetings.

Conflicts are even more ingrained when the auditors also provide consulting services. That’s why EY’s decision to hive off its consulting arm is important, despite the shadow of fat cattery about the way it is being done.

Another issue is that the punishment never really fits the offence. This may change if a government-in-limbo finally legislates for a new, more powerful Audit, Reporting and Governance Authority.

The gap between the fines levied, the offence and the rewards which PwC partners receive is immense.

The loss at BT’s Italian offshoot was £530m – it wiped £8bn off the BT share price at the time and eventually chief executive Gavin Patterson paid with his job.

Over at PwC, the profit per partner in the year ending June 2022 reached £920,000, up sharply from the previous two years. In other words, the fine imposed by the FRC was less than three partner incomes. Regulatory trauma was simply a cost of doing business badly.

Reputational damage, yes. But as there is so little choice of audit for clients it is nice work if you can get it.

Anyone who has dipped into David de Jong’s book Nazi Billionaires: The Dark History Of Germany’s Wealthiest Dynasties could only feel disdain for the efforts of the controlling Porsche and Piech clan to tighten their control of both Volkswagen directly and an initial public offering for Porsche.

It is astonishing that families that built their vast fortunes on working with Hitler still exert such authority over German business.