The accumulation of market power by the digital giants is frightening.

Yet craven US politicians show no inclination to embrace the anti-trust crusading of Teddy Roosevelt, who dismantled Standard Oil when he occupied the White House more than a century ago.

Microsoft has a market capitalisation of £1.7 trillion and is the dominant force in computing software. It wants more with its meaty £50billion bid for video game creator Activision Blizzard. 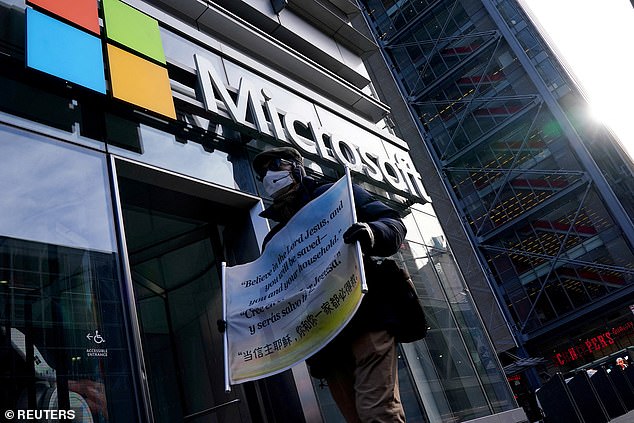 Microsoft has a market capitalisation of £1.7 trillion and is the dominant force in computing software. It wants more with its meaty £50bn bid for video game creator Activision Blizzard

It threatens to use its monopoly power to dominate a competitive market for computer games.

The concern must be that it will seek exclusivity for leading edge games such as Call of Duty, blocking access to other systems.

This is analogous to the issues raised by Nvidia’s offer for Softbank-owned Arm Holdings.

There is anxiety that if Cambridge-based Arm is merged into Nvidia, the new owners will offer exclusive deals to its main clients, destroying the open access model to its smart chips.

As matters stand, a lack of anti-trust fervour in Washington is allowing the mega-tech companies to dominate cyberspace and purloin intellectual property.

The jobs networking site LinkedIn was swallowed by Microsoft in 2016 for £20billion. Google took control of Fitbit for £1.5billion in 2019.

Salesforce spent £19.8billion on messaging site Slack in 2020. Facebook spent £14billion on WhatsApp in 2014. All such deals lessen competition for data services and content or both.

Word is that President Biden is determined to scrutinise tech mergers more closely. But with approval ratings languishing close to the lowest level of any modern president, and mid-term elections in November, the idea that Biden might show boldness in the face of corporate autocrats is fanciful.

Financial markets are giving the Microsoft deal a thumbs down. Activision’s share price has fallen well below the bid so investors plainly see it as imperilled.

Truth is that regulatory interference is far more likely to come from the European Union, China or our own Competition & Markets Authority rather than US enforcers at the Justice Department or Federal Trade Commission.

There was no surprise when Trump held back on interfering with Silicon Valley. It might have been hoped that Biden would see political value in becoming a trust buster.

If the president fails to intervene in the latest Microsoft transaction, consumers will ultimately face higher prices and less choices. A chilling outcome.

We hear far too little from buy-side analysts and asset managers in the face of corporate actions, so the intervention is welcome. But as clear-eyed as Smith is on Unilever’s sub-optimal performance vis-a-vis other fast moving consumer goods groups, the note is not convincing.

Given the scale of the Fundsmith holding, there was nothing to stop him picking up the phone or doing an Elliott by going public.

Smith contradicts his complaint when he acknowledges he was contacted over the frustrated move of domicile to the Netherlands, and admits that communications have improved post Paul Polman.

The suggestion that Unilever should stick to its knitting rather than seeking transforming deals doesn’t bear scrutiny.

Nestle’s outperformance is a result of buying into the wellbeing market back in the noughties when it took over the Novartis nutrition brands. Reckitt has been built on adding health to its hygiene portfolio. Cutting off Unilever from beauty, where it has built £1.5bn of revenues, is counter-productive.

Alan Jope’s talk about business with purpose might look like corporate waffle. ESG warrior investors who have put down a resolution for Unilever’s AGM, calling for targets for healthier foods, would disagree.

A political narrative has developed suggesting the cost-of-living crisis is unique to the UK. Not true.

Consumer prices are rising at a 7 per cent rate in the US despite plentiful natural gas supplies.

Data from the eurozone shows prices rising at 5 per cent with energy accounting for almost half the gain. In monetarist, anti-inflation Germany consumer prices are rising by 5.3 per cent.