Nearly all post-pubescent women have experienced period-related panic at least once: They realize their flow has started but all their products are at home, their local convenience store has run out of their tampon brand, or — run! — they suddenly remember that their tampon hasn’t been changed in well over eight hours.

But a new all-in-one period tracker app is looking to change all that. Orchyd, which launched in April, promises every period-related need in one handy app — with one equally handy accessory.

In addition to standard tracking functions for flow and ovulation, Orchyd also offers affordable telehealth consultations, reminders to replace or tampons and menstrual cups, and even a Bluetooth device that alters the user if they’re leaving home without their Tampax or Kotex. 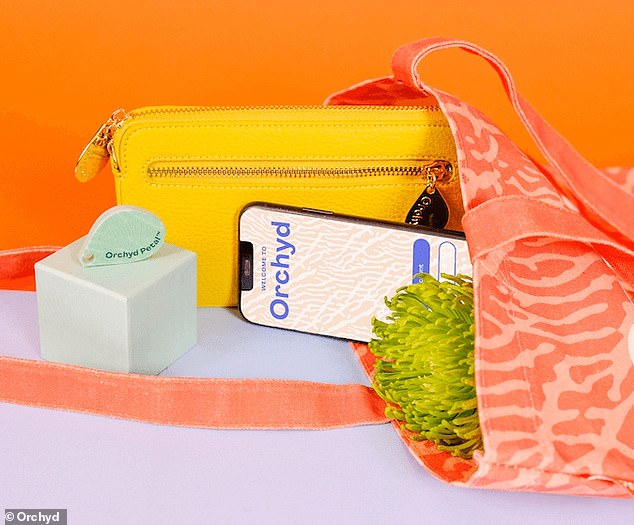 Ta-da! Orchyd, which launched in April, promises every period-related need in one handy app — with one equally handy accessory 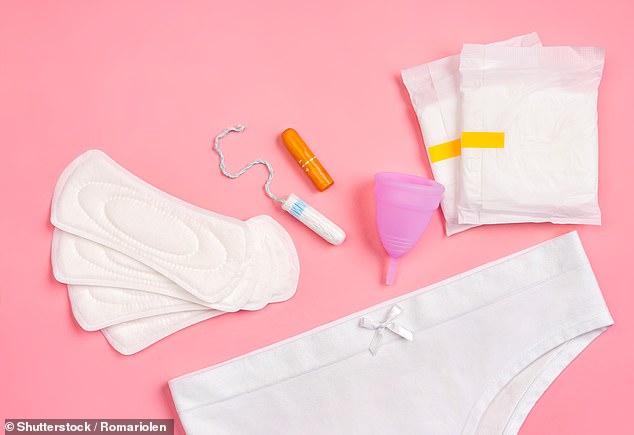 Be prepared! Orchyd can not only help you find period products at nearby stores, but it will also tell you when you are leaving home without your stash

The ad-free app has several different features, the first of which being a menstrual cycle tracker, which tracks flow, fertility, ovulation, and overall health.

Users can log the characteristics of their time of the month, including mood and symptoms, and the the app can predict a user’s most fertile days if they’re trying to get pregnant — or avoid it.

It can predict other things, too, like when a user’s period will start or their PMS symptoms.

It can also locate period care products like tampons, pads, or menstrual cups in nearby stores with a map feature.

All in one: The ad-free app has several different features, the first of which being a menstrual cycle tracker, which tracks flow, fertility, ovulation, and overall health

What is Toxic Shock Syndrome?

Toxic shock syndrome (TSS) is a dangerous bacterial infection that occurs when staphylococcus aureus or streptococcus bacteria, which live on the skin, invade the bloodstream and release dangerous toxins.

Women are most at risk it during menstruation, particularly if they use tampons or have recently given birth.

Doctors have claimed it affects around one or two in every 100,000 women.

In severe cases, surgery may be required to remove dead tissue. In rare incidences, it may be necessary to amputate the affected area.

To prevent TSS, women should use tampons with the lowest absorbency for their flow, alternate between a tampon and a sanitary towel, and wash their hands before and after insertion. Tampons should also be changed regularly, as directed on the packaging — usually every four to eight hours.

But what makes the service so unique is the program’s Orchyd Essentials three-in-one period care set, which sells for $79.

The physical set comes with a ‘period smart case,’ a stylish bag that can carry period care products — as well as keys, a phone, and credit cards.

The bag has adjustable and removable straps, and can be worn as a clutch, wallet, shoulder bag, fanny pack, or cross-body bag.

It also comes with a Bluetooth-enabled ‘Petal,’ which alerts the user if they’re leaving home without it during that time of the month.

Users can also be alerted by the app when it’s time to change their tampon or menstrual cup — which can offer peace of mind to anyone worried about toxic shock syndrome.

‘With our intentional design that assumes no gender identity or sexuality, Orchyd brings transparency and inclusivity to conversations surrounding periods,’ Morgan said in a press release. 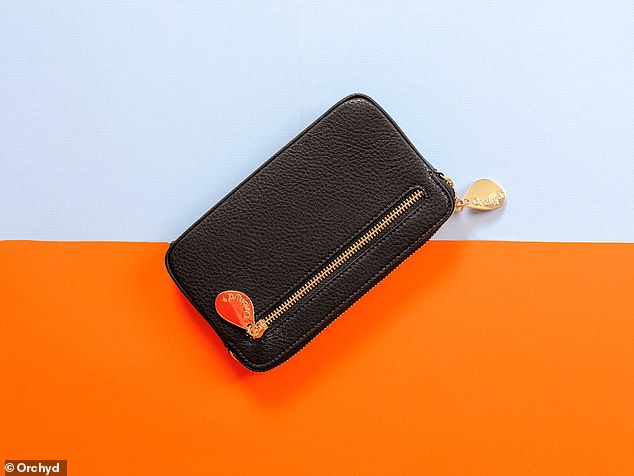 Orchyd Essentials three-in-one period care set, which sells for $79, comes with a Bluetooth-enabled bag that can carry period care products — as well as keys, a phone, and credit cards 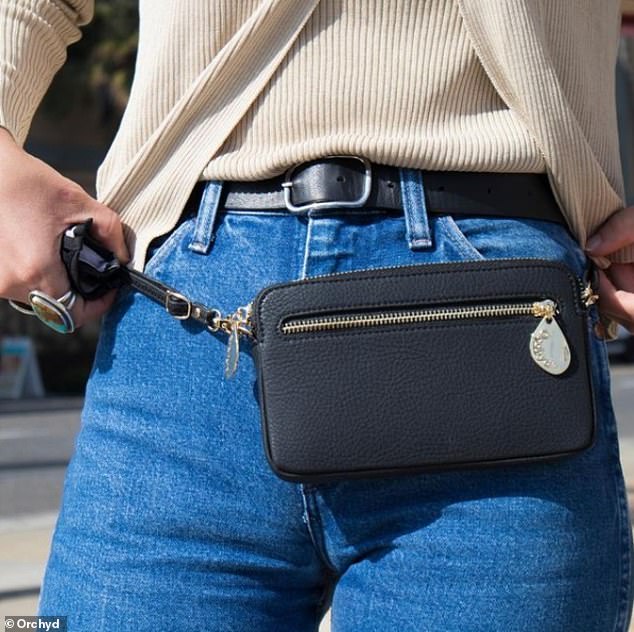 Cute!The bag has adjustable and removable straps, and can be worn as a clutch, wallet, shoulder bag, fanny pack, or cross-body bag

‘There is no overuse of pink and flowery imagery, and [it] communicates with the user like a real person,’ Courtney added to PopSugar.

‘There is no patronizing tone or overuse of emojis or euphemisms. It is designed for women and everyone who has a period, no matter their stage, age, identity, or cycle.’

She also revealed the stroke of genius behind the GPS-enabled Petal.

‘The idea for the Petal came out of our own personal experiences and in response to Murphy’s Law of Menstruation, which states that 86 percent of menstruators have started their period unexpectedly in public without the supplies they need,’ Morgan explained.

‘I’m just lucky to be alive!’ Model who lost BOTH of her legs after contracting toxic shock syndrome from tampons reveals she’s training to run in the New York City Marathon this year

Lauren Wasser, 32, first made headlines in 2016 with her horrifying story of contracting TSS, a disease most women today assume could never effect them.

On October 3, 2012, when she was 24, Lauren was in Los Angeles making a career as a model when disaster struck.

‘So I immediately stripped off everything and got in my bed, and that’s the last thing that I remember,’ she said.

While she was out cold, her mom grew worried and called police requesting a wellness check, which is how officers showed up at her door later that night. 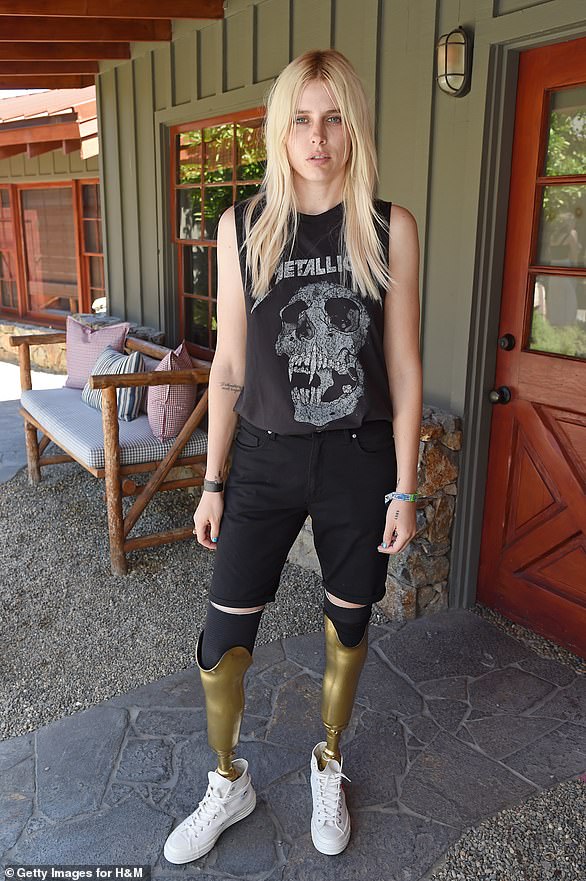 Lauren Wasser, 32, lost both of her legs due to TSS

‘They found me face-down in my bedroom, ten minutes from death,’ she recalled. ‘Then they rushed me to the hospital where all my organs were failing. I had numerous blood transfusions.’

She also had a fever of 107 degrees Fahrenheit and had suffered a heart attack — but her doctors couldn’t figure out what was wrong.

Luckily, an infectious disease specialist at the hospital guessed that Lauren might be suffering from TSS. A lab confirmed his suspicions.

Though Lauren said she changed her tampon several times that day, she likely didn’t need the super-plus variety she’d been using.

Lauren’s condition didn’t improve. One doctor said he was going to home to pray for her and advised her mom to do the same. 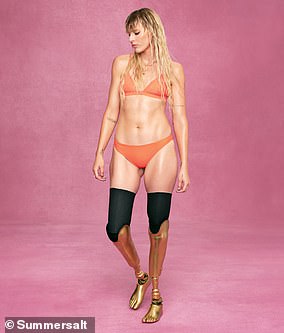 She has continued to move forward with her modeling career, and has appeared in several runway shows and campaigns, including a recent one for inclusive swimwear brand Summersalt

‘They put me in a medically-induced coma, and I was on life support and breathing tubes,’ she said. ‘I was in a coma for about a week and a half.’

During that time, the infection in her legs turned to gangrene. When she woke up, it was to the sounds of medical professionals discussing her impending amputation.

Lauren knew her legs hurt — they felt like they were on fire — but she wasn’t prepared for such a drastic solution.

‘I was telling my mom, like, “Please don’t let that happen.” Like, this can’t be real,’ she said.

Doctors amputated her right leg below knee, as well as the toes and heel of her left foot. Then, in early 2018, she revealed that she’d undergone surgery to remove her other leg due to further complications.

Wasser is now an advocate pushing legislation urging the National Institutes of Health to help test feminine hygiene products to determine they are safe.

She is advocating for the Robin Danielson Act, named after a woman who died from TSS in 1998, which directs the National Institutes of Health to do research on the potential health risks of feminine hygiene products.

She has also continued to move forward with her modeling career, and has appeared in several runway shows and campaigns. Most recently, she starred in a campaign for inclusive swimwear brand Summersalt