AO World boss John Roberts admitted he has been caught out by runaway inflation since the end of Covid but insisted the company was now in better shape to fight the crisis.

The white goods seller was a pandemic winner as people sat at home and splashed money on washing machines, dishwashers and fridges.

But over the past year its shares have tumbled by more than 80 per cent after issuing a series of profit warnings as runaway inflation saw their customers tighten the purse strings. 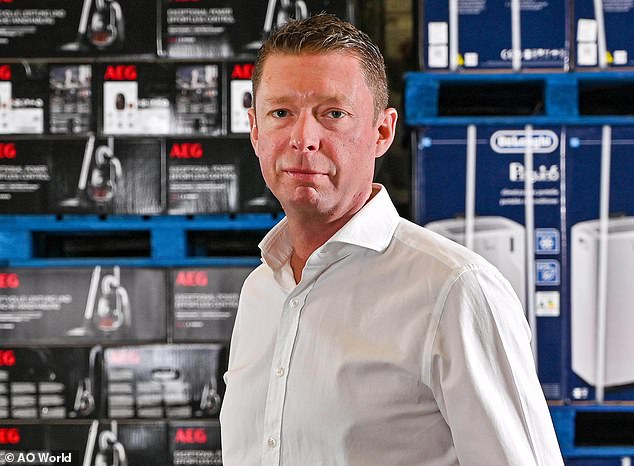 Confident: John Roberts, who set up AO World in 2000 and is its chief executive, insisted the company was in good shape to fight the cost of living crisis

In an update yesterday, the firm recorded a loss of £37million for the year to the end of March, down from a £20million profit the previous year. Revenues fell 6.2 per cent to £1.6billion.

Roberts, who set up AO World in 2000, said: ‘Yes, we made some misjudgements on what the consumer would do post-Covid.

‘Sales have stepped back more than we thought they were going to. We set ourselves up for a higher level of sales and we’re changing that.

‘As you go through a storm, you batten down the hatches and focus on core fundamentals, not raising your sales or getting distracted exploring new opportunities.’

In July AO World was forced into a £40million fundraising round after insurer Atradius pulled its credit cover to some of its suppliers.

Without credit insurance, AO’s suppliers were demanding payment upfront, and as a result the company was burning through cash.

‘We did a placing during the year and all our major shareholders supported that placement,’ Roberts said. ‘Those people that are closest to the business and understand it best are backing it with their long-term commitment and their money.

‘They’ve demonstrated faith in the plan that we have for the business.’

To combat falling sales, the firm plans to reduce costs, including cutting the amount spent on advertising and marketing.

Already in June the company closed its German business. Shares rose 5 per cent, or 2p, to 42.16p.

Roberts, 48, who was born in Bolton and started AO World after a friend bet him £1 to set up a business, said that he has never seen anything like current inflation levels.

‘It’s making customers more careful about how they spend their time and money.’

'A new Britain for a new era': Truss vows to crush anti-growth coalition with 3-point plan

Anna Richardson, 52, vows to have kids despite 'hellish' menopause after meeting new beau