A stunning new two-seater Aston Martin with a top speed nudging 200mph and a near £2million price tag to match has been unveiled by the legendary British brand today.

The exclusive new DBR22 – with a thunderous 5.2-litre V12 petrol engine – is hailed as a powerful last hurrah to the traditional internal combustion engine and a two-finger salute to political leaders preparing to outlaw it in favour of electric power from 2030.

The roofless design harks back, with a modern 21st century twist, to the 1950s DBR1 – the open-cockpit racing sports-car described as ‘the most important Aston Martin ever produced’ having set the way for the brand’s iconic ‘DB’ car range that followed and has made the brand a household name. 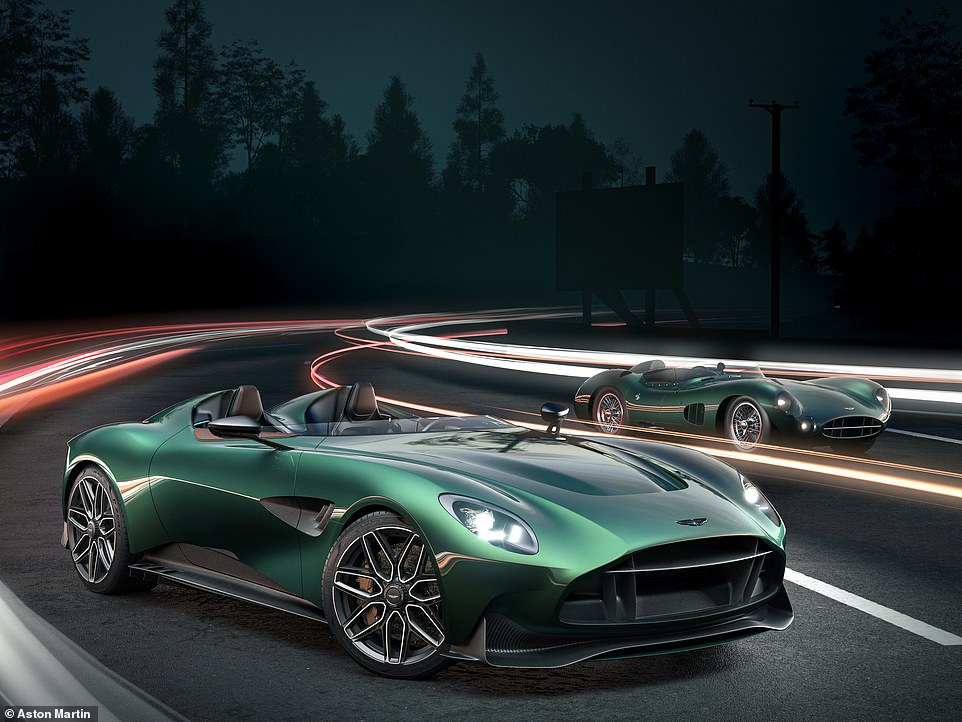 Roofless competitor: This is the new Aston Martin DBR22 – an ultra-exclusive supercar without a roof. And there’s no battery or electric motor in sight…

While any car without a roof might appear to be an extremely impractical option, the DBR22 is the latest open-top supercar produced by the sector’s biggest players for customers who live in the sunniest climates and are happy to splash out on outrageous motors.

It will go head-to-head with the £1.3million Ferrari Monza and £1.4million McLaren Elva and is revealed just two years after the British marque took the wraps off the £765,000 Speedster (see below for a spec comparison).

The new DBR22 is the first Aston Martin to use 3D printing techniques to create part of its frame and has been created to celebrate the 10th anniversary of its in-house bespoke division called ‘Q by Aston Martin’ – which uses the same codename letter from the quartermaster ‘Q’ character in James Bond books and movies who is famed for creating 007’s hi-tech gadgets, including cars.

It aims to be one of the stars of the prestigious Monterey Car Week in California where the world’s rich, famous, celebrity, automobile fans from around the world are gathering on America’s West Coast for the high-octane extravaganza. It will be on display at Pebble Beach Concours D’ Elegance that runs from 19 to 21 August.

Powered by a 715 horsepower V12 twin-turbo petrol engine linked to an eight-speed paddle-shift automatic gearbox and riding on 21-inch wheels, the new carbon-fibre bodied Aston DBR22 accelerates from rest to 60mph in just 3.4 seconds up to a top speed of 198mph. 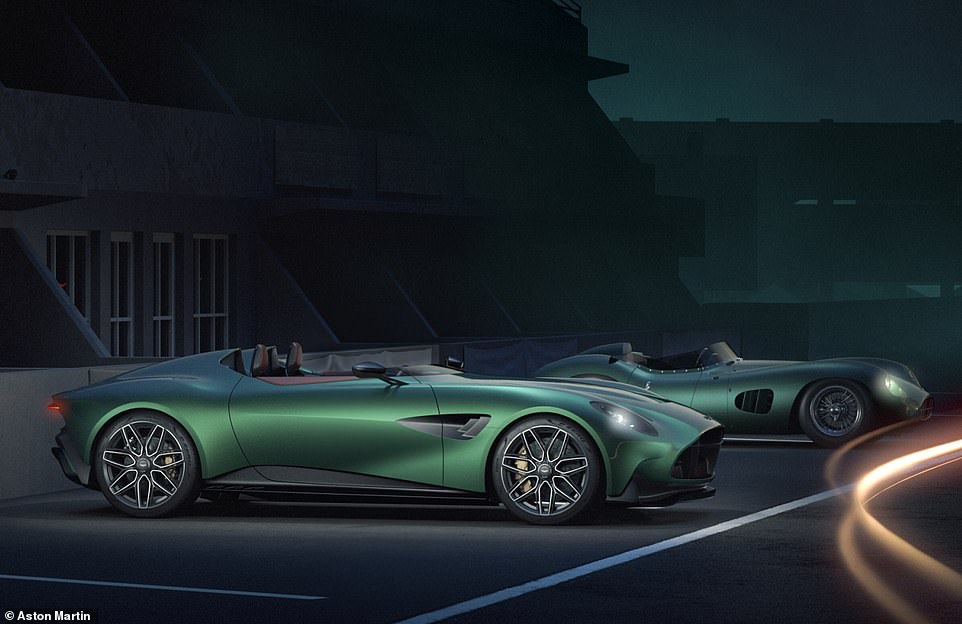 The DBR22 is a reborn road-going version of the 1950s Aston Martin DBR1 – one of the rarest, most important and priciest Astons in its long history 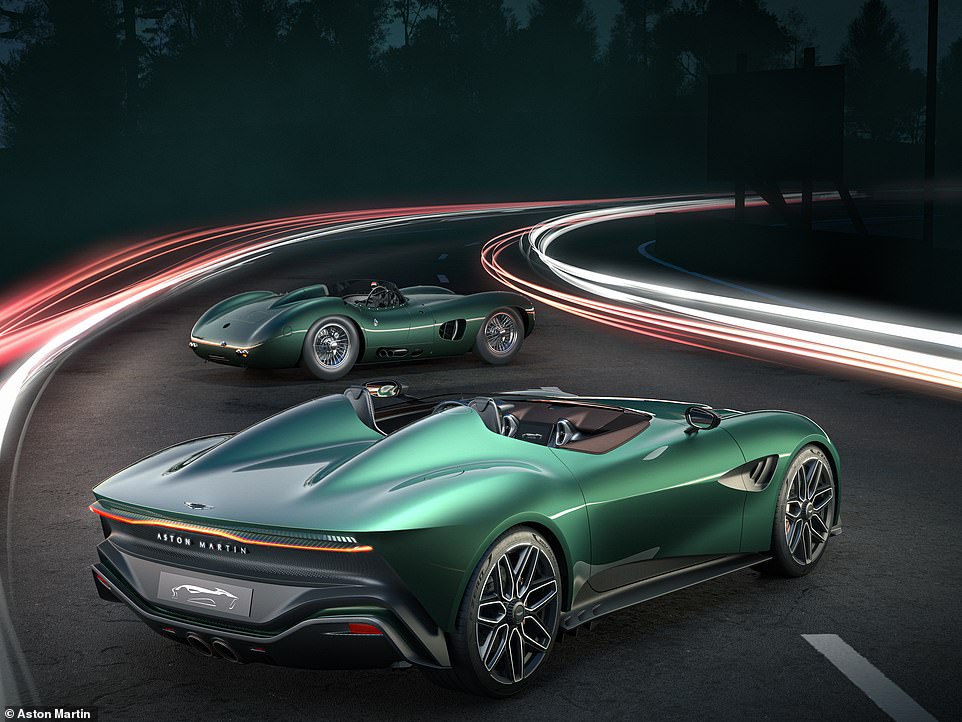 The DBR22 is an ultra-exclusive tribute to the DBR1 that’s almost 70 years its elder. Only 10 will be made and each will cost a whopping £1.8million

Only ten production models will be built – one for each year that British car firm’s Q division has existed – with a price of £1.8million (around £1.5m plus VAT of £0.3m).

Will it fit in my garage? Aston Martin DBR22

The show-car forms the basis of a ‘production reality example for an ultra-exclusive number of Q by Aston Martin customers’, it said: ‘The DBR22 has incredible road presence, perfectly capturing the raw emotion of the driving experience.

‘By mating the classic art of coachbuilding with advanced materials and cutting-edge manufacturing technologies, DBR22 is a perfect blend of design purity, engineering precision, heart-pounding performance and true passion.’

With just 10 planned to be made, the firm based at Gaydon in Warwickshire said: ‘It is one of the rarest Aston Martins in the marque’s rich 109-year history.’

Aston said the DBR22 showcases a completely new sculpted and muscular body created from a minimal number of body panels, giving a nod to the past but with a contemporary twist: ‘The result: a smooth and effortless blend of exceptional drama and elegance, with several unique design features to compliment.’

The long bonnet drawing the eye to the cockpit features a dramatic recessed horseshoe vent to aid airflow from the vast V12 engine below.

The lightweight alloy wheels feature a unique 14-spoke design created especially for the DBR22 with a motorsport-derived centre-lock hub. There’s also a smoothly integrated diffuser and a pair of large diameter exhaust tailpipes. 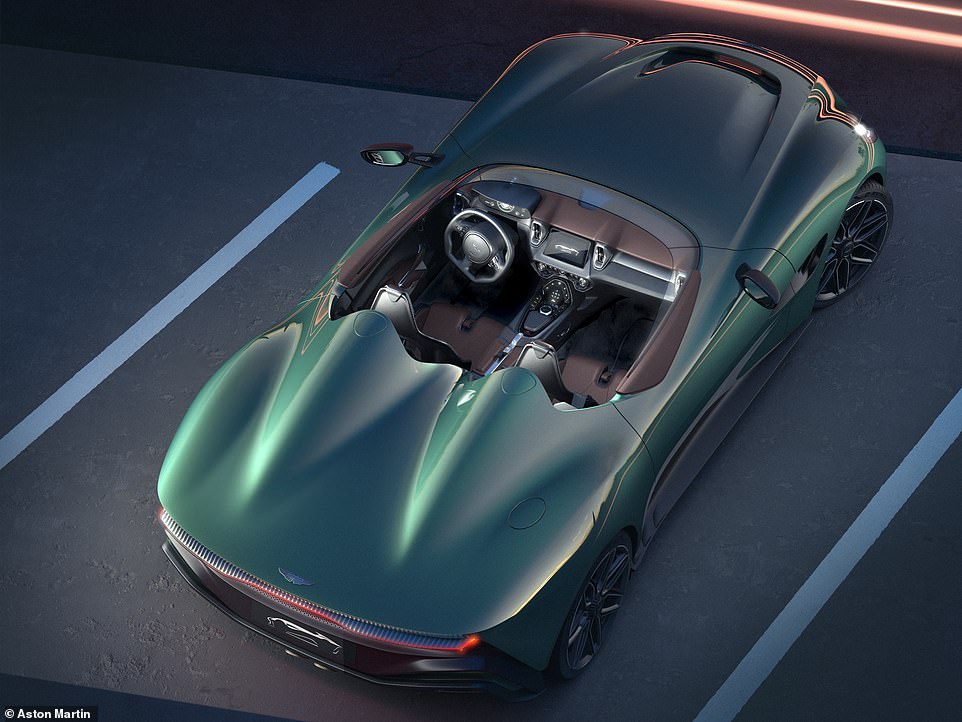 Powered by a 715 horsepower V12 twin-turbo petrol engine linked to an eight-speed paddle-shift automatic gearbox. The new carbon-fibre bodied Aston DBR22 accelerates from rest to 60mph in just 3.4 seconds up to a top speed of 198mph 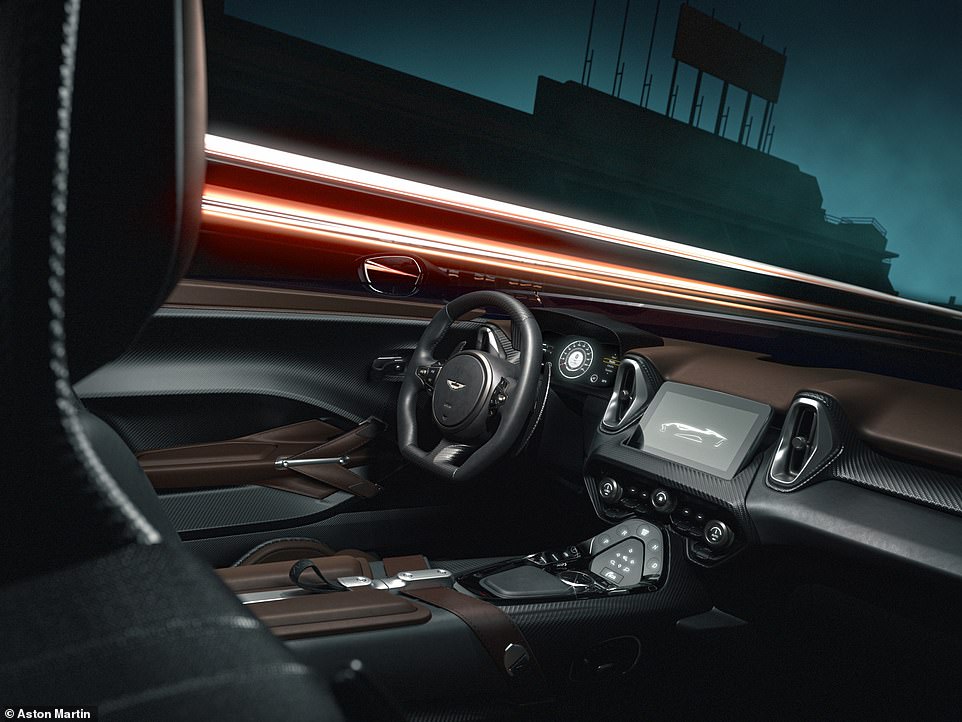 The DBR22s cockpit features extensive use of both leather and exposed carbon fibre, with an uncluttered dashboard and sleek infotainment display 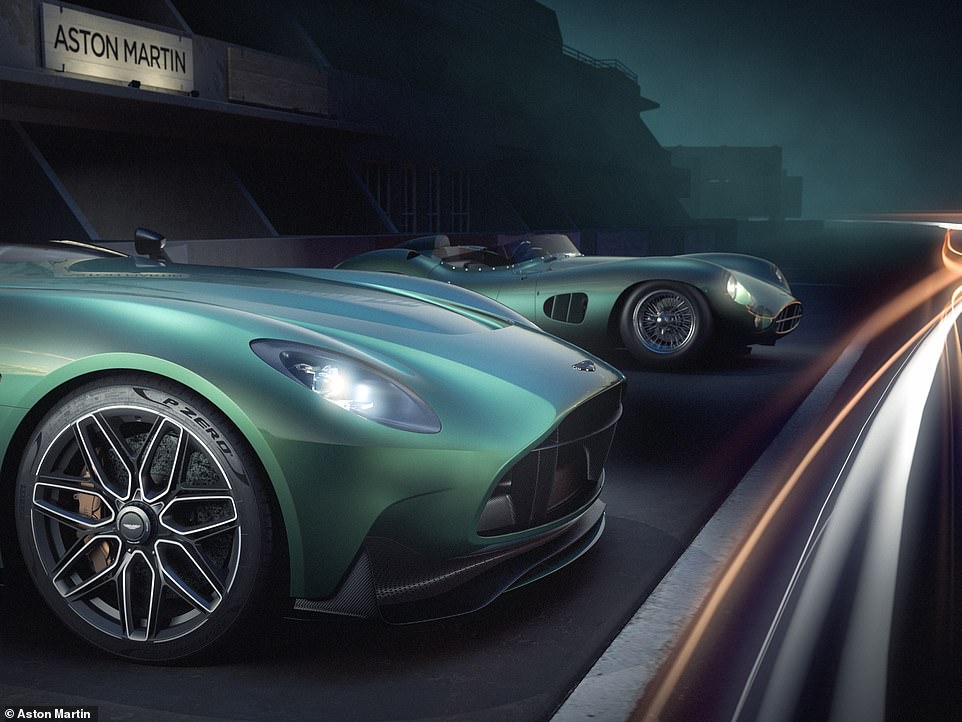 The cockpit features extensive use of both leather and exposed carbon fibre, with an uncluttered dashboard and sleek infotainment display.

But the company stresses: ‘The DBR22 is no bare-bones racer inside. Supple aromatic hides swathe the contemporary dashboard, the carbon fibre performance seats and extend over the tops of the doors to create an inviting hint of the interior.’

Twin aerodynamic nacelles behind the seats smooth the airflow behind the driver and passenger’s heads.

There’s a horizontal light graphic from a slim, full-width light bar, and a perforated panel beneath allows hot air to exit the tail.

Extensive options include bespoke paint colours and finishes, graphics, tinted carbons and materials inside and out. 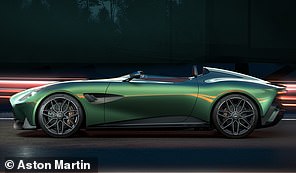 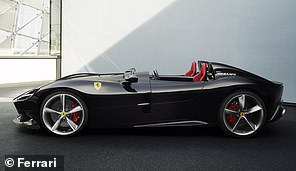 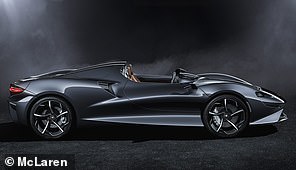 The firm said: ‘Every Q by Aston Martin car can push the limits of design and desire and is completely tailored to the customer.

‘With nothing but the slipstream between the driver and this epic engine’s unforgettable twelve-cylinder howl, the DBR22 promises to be an intense sensory stimulation.’

It adds: ‘The chassis delivers a blend of body control and ride refinement that will make the DBR22 an absolute pleasure to drive – on road or racetrack.

‘The DBR22 also features a 3D printed rear sub-frame – the first time Aston Martin has introduced such a method. The component is made from multiple 3D printed parts printed from aluminium, which are then bonded to form the finished sub-frame.

‘It offers a significant weight saving and no reduction in stiffness, plus the ability to make special parts for ultra-low volume models, where required.’ 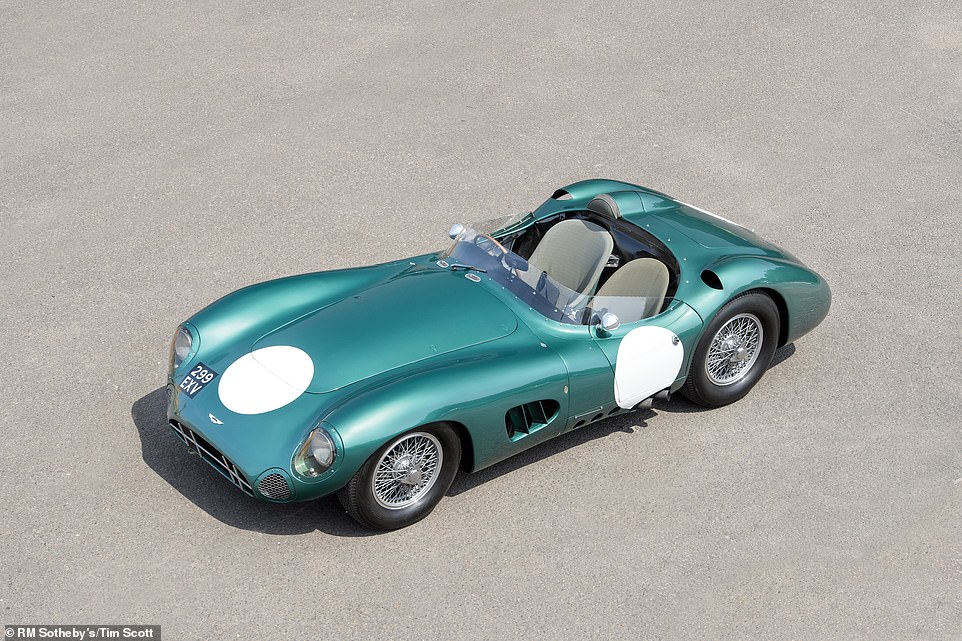 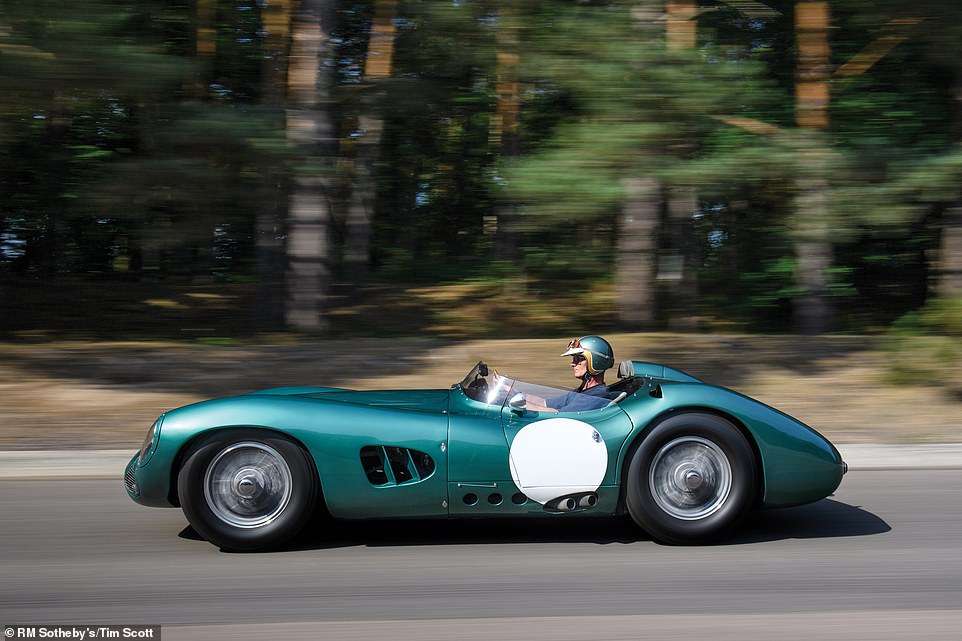 The DBR1 is also the most expensive Aston Martin to change hands, with chassis number 1 selling at RM Sotheby’s Monterey auction in 2017 for a massive $22.5m (£17.5m). It remains the ninth most expensive motor to go to the block on record

Aston said the DBR22’s classic proportions and muscular curves take their inspiration directly from the world-beating DBR1 and DB3S two-seater open-cockpit sports-cars of the 1950s.

DBR1 is still today recognised as the brand’s ‘most important car ever produced’, not solely for its achievements on the track but also the beginning of the Aston Martin ‘DB’ road car blood line, including the Bond-famed DB5.

The DBR1 is also the most expensive Aston Martin to ever change hands, with chassis number 1 selling at RM Sotheby’s Monterey auction in 2017 for a massive $22,550,000 (around £17.5million at the time of sale). It remains the ninth most expensive motor to go to the block on record.

It added: ‘DBR1, known as the ultimate Aston Martin sports-car, took Feeley’s design language a stage further and became one of the most important, influential Aston Martins of all time.’

Most famously its wins included Le Mans in 1959, when driven by Carroll Shelby and Roy Salvadori, and taking the Aston Martin team onto the ultimate victory by winning the World Sports Car Championship in that same year.

Saluting a decade’s work by its Q division Aston said: ‘Iconic one-off commissions such as Aston Martin Victor, and low volume specials such as Vulcan – limited to 24 examples worldwide, and Vantage V600 – limited to just 14, are truly magnificent examples of these collaborations.’ 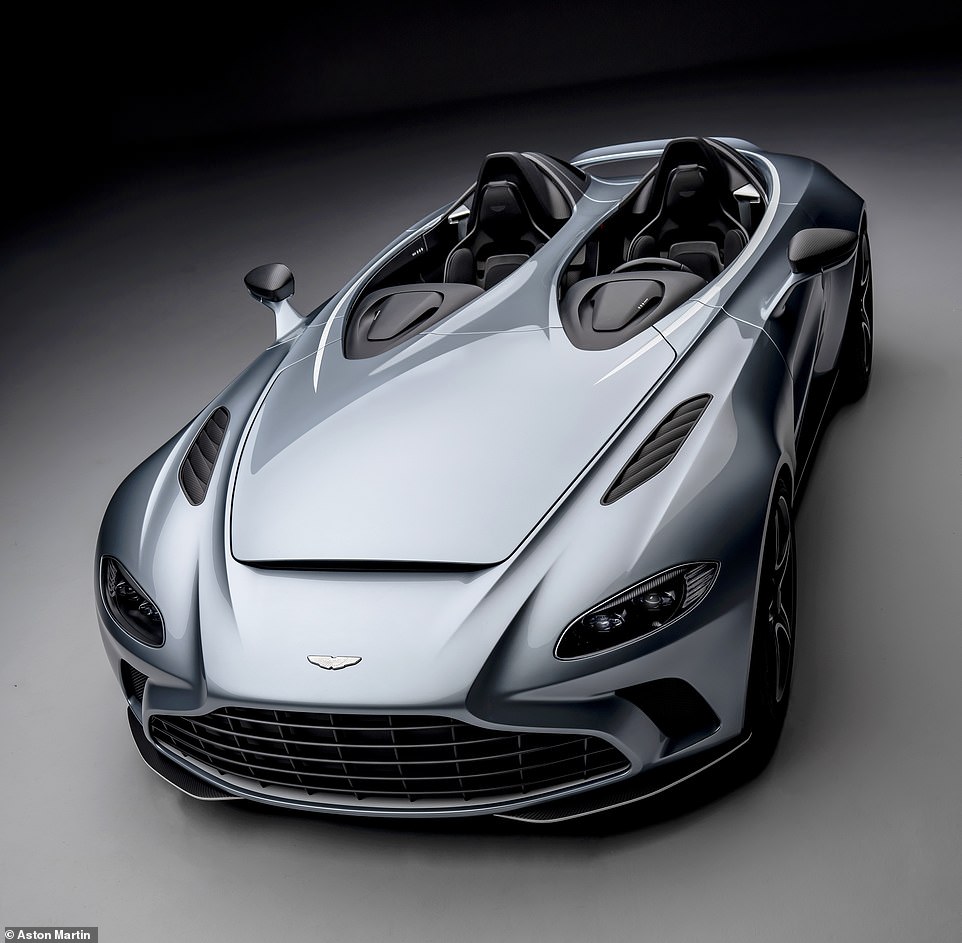 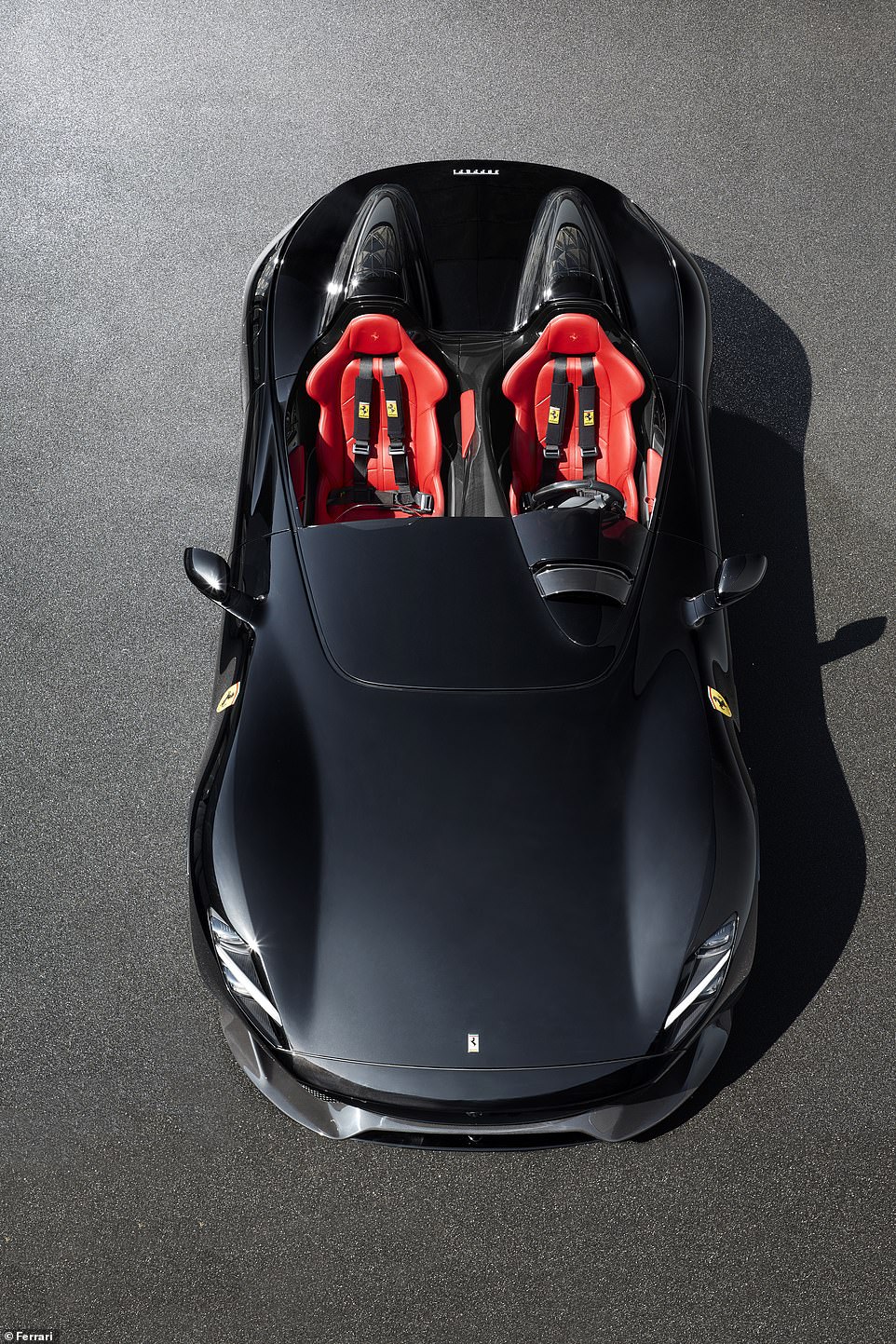 Ferrari unveiled the Monza in 2018. It was available as a single seat SP1 option or this two-seat SP2. At the time of launch it was the most powerful Ferrari ever sold for the road 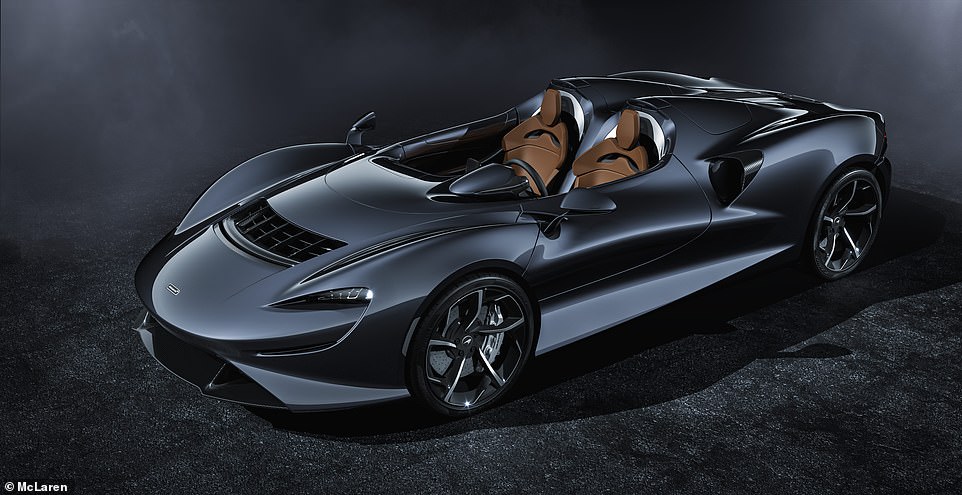 McLaren’s roofless effort, the Elva, was unveiled a year after the Ferrari Monza. It uses clever tech to move wind from blowing into the face of the driver, despite their being no screen at all. Some 399 were due to be built, but production was cut to 249

Aston Martin chief technical officer Roberto Fedeli said: ‘Technology is pivotal in the construction of DBR22, with extensive use of carbon fibre throughout, and the use of 3D printing for the manufacture of a structural component.

‘For a car that was designed to celebrate the ultimate bespoke customisation service, the engineering developments mean DBR22 truly has the dynamic theatre to match, ensuring the drive is just as addictive as its looks.’

‘DBR22 is a hot-blooded, purebred Aston Martin sports car full of speed, agility and spirit, and a machine that we think will be the basis of many of tomorrow’s icons.’

NCIS season 20, episode 2 cast: Who is in Daddy Issues?