The defence giant wants to hire 1,000 engineers over the next 12 months across its air division, The Mail on Sunday can reveal.

Recruits will work on the ‘once in a lifetime’ Tempest project as well as the existing batch of Typhoon jets and other future products, said Cliff Robson, who heads BAE’s air group. 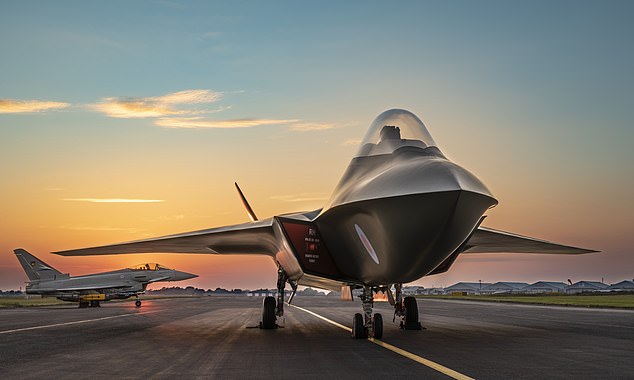 Fighter: A prototype of the Tempest is expected in five years

The company has ambitious plans for Tempest and a prototype is expected within five years.

Robson, who started as a BAE engineer 39 years ago, said it will play a vital part in Britain’s ambitions to retain its military might.

‘Without Tempest, we lose the sovereign capability in terms of military aircraft and fast jets, which is essential if you want security and defence of the country,’ he added.

Britain must ensure it is prepared for any conflict, even on home soil, after Russia’s invasion of Ukraine ‘reawakened’ military tensions, he said.

Shares in BAE, which last week appointed Cressida Hogg as its first female chairman, have risen by more than 30 per cent in the past year. BAE’s aviation group has seen a surge in demand since war broke out in Ukraine – due to the firm’s role servicing the Royal Air Force fleet.

Robson expects an increase in orders for military aircraft in response to the war. BAE’s contracts for jets can be worth billions of pounds with customers including Spain and Qatar.

Arms buyers will be able to catch a glimpse of BAE’s Tempest ‘demonstrator’ by 2027. Some have questioned the ambitious timeline. But Robson is adamant, saying: ‘I guarantee we will fly this thing within five years.’

The project will see the UK team up with Japan, Italy and Sweden. Robson said the international alliance will help boost investment and order potential.

The consortium is led by BAE and includes enginemaker Rolls-Royce and the UK arms of European firms Leonardo and missile-maker MBDA. The UK is due to make a final decision on the project in three years.

'Had a plan for a serious party': Rayner takes brutal pop at Boris as she slams ex-Tory PM