By Lucy White City Correspondent For The Daily Mail

Bain & Company has hit back at a decision by Jacob Rees-Mogg to ban it from working on UK government contracts.

The US management consultancy received a letter from the Cabinet Office minister explaining that it would not be allowed to tender for British state work for three years, following its involvement in a South African corruption scandal.

But in a fiery statement, Bain said it was ‘disappointed and surprised’ – and would be responding to address ‘material inaccuracies’ in Rees-Mogg’s letter. 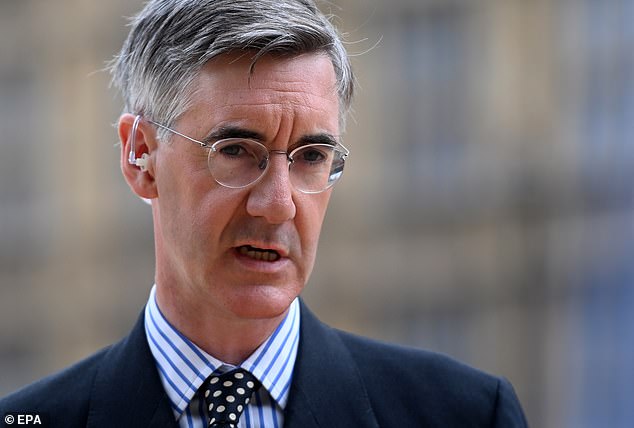 Bain & Company has hit back at a decision by Jacob Rees-Mogg, pictured, to ban it from working on UK government contracts

Bain, which is based in Boston and once counted former Republican presidential candidate Mitt Romney as an employee, has been accused of playing a key role in a post-apartheid corruption scandal.

It was working on a restructuring of South Africa’s tax authority, but an inquiry found that it ‘colluded’ with then president Jacob Zuma to precipitate a breakdown of the institution.

Zuma has denied accusations of corruption, and while Bain has admitted failings, it does not accept all the inquiry’s findings. Britain is the first western country to penalise Bain, following pressure from anti-apartheid campaigner Lord Hain.

In a letter to Bain’s UK managing partner James Hadley, seen by the Financial Times, Rees-Mogg said the company would be banned from taking on Cabinet Office contracts for three years from January 4, 2022.

Other departments have been advised to shun Bain too. Rees-Mogg added: ‘I trust that after three years have elapsed Bain & Co will have restored its reputation.’

He accused the company of ‘grave professional misconduct’ in South Africa which ‘renders its integrity questionable’. It is understood that Cabinet Office officials had steered Rees-Mogg away from imposing a ban, but that he sought further advice from a barrister.

Bain said: ‘We are disappointed and surprised by the minister’s decision. We will be responding to express our concern about the process and its outcome, where recommendations from the Cabinet Office were apparently overruled, and to address material inaccuracies in the minister’s letter.

‘If necessary, we will then consider other options for review of the decision. In the meantime, we will continue to work with the Cabinet Office to ensure that we do what is required to restore our standing with the UK government.’

Bain has taken on UK public sector contracts worth up to £63m since 2018, including £40m of Brexit-related consulting work for the Cabinet Office. It said it had repaid all fees from its work on the South African Revenue Service, and had not been found to have acted illegally.

It has also appointed a global risk officer and improved its risk controls, it added. A spokesman said: ‘These steps have been scrutinised by the UK Cabinet Office and, prior to the minister’s decision, we understood that these remedial measures met the UK government’s requirements. ‘This appears not to have not been taken into consideration by the minister.’

Canadian trucker sentenced to 4 years in prison for smuggling $2.5 million of meth