Bank of England is walking a ‘tight line’ between curbing inflation and tipping the UK into a recession, warns Bailey

The Bank of England is walking a ‘very tight line’ between curbing inflation and tipping the UK into a recession, its governor has warned.

Andrew Bailey said there was a real risk that raising rates too fast to keep a lid on the cost of living could slam Britain’s economic recovery from the pandemic into reverse. And he warned there should be ‘no appeasement of Russia’ – even if sanctions and higher energy prices caused more economic pain.

The comments came as his counterpart in the US – Federal Reserve chairman Jay Powell – gave the strongest signal yet rates in America would rise by 0.5 percentage points next month rather than the more usual 0.25. 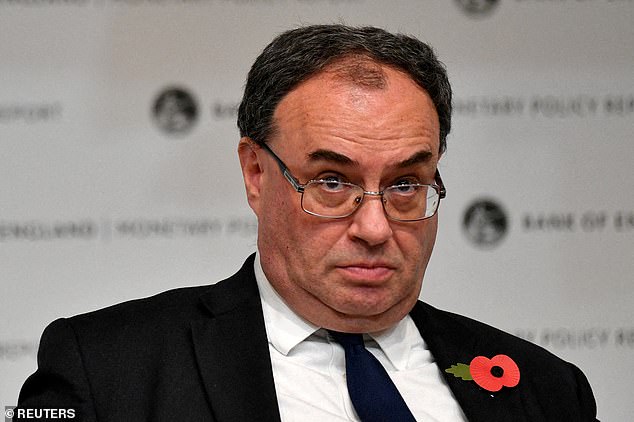 Balancing act: Bank of England governor Andrew Bailey (pictured) said there was a real risk that raising rates too fast slam Britain’s economic recovery from the pandemic into reverse

Central banks around the world rare raising rates as they battle the highest levels of inflation for decades.

But it is feared aggressive rate hikes at a time when economies are slowing could tip them into recession.

Speaking at the Peterson Institute for International Economics in Washington, Bailey said: ‘We are in a period of unprecedentedly large shocks.

‘We are walking a very tight line between tackling inflation, and the output effects of the real income shock and the risk that it could create a recession and push us too far down in terms of inflation.’ Even so, he added that it was ‘critical that we do support the Ukrainians’.

Bailey said: ‘There should be no appeasement of Russia because we have to deal with economic consequences. We just roll our sleeves up and get on with it.’

The Bank of England has hiked rates three times in recent months, from their pandemic low of 0.1 per cent to 0.75 per cent, as it steps up its battle against inflation.

Inflation is already running at a 30-year high of 7 per cent and looks set to top 8 per cent – a level not seen since the early 1980s.

The Bank is widely tipped to raise rates again and again in the coming months in a bid to bring inflation under control.

But at the same time, Britain is still recovering from the economic slump caused by the Covid pandemic.

Officials at the Bank are worried that raising rates too fast will halt activity, as businesses and households hoard their cash – and could even tip the UK into a recession.

This is usually defined as two consecutive quarters of shrinking output, and is often accompanied by rising unemployment and lower living standards.

The Bank’s rate-setting Monetary Policy Committee will meet again next month, and is widely expected to lift rates to 1 per cent.

Bailey emphasised that other regions – including the eurozone and the US – were struggling with their own versions of the inflation problem.

But his colleague Catherine Mann, speaking at a Bank of England event earlier in the day, seemed to suggest that it was more risky to hesitate on raising rates.

How many episodes are in The Walking Dead season 11?

The Walking Dead season 11, episode 17 cast: Who is the AMC series?