More than £200million of fraud has been spotted and prevented since 2016 due to a rapid scam response scheme enabling bank staff to alert local police forces with a codeword.

Staff at banks, building societies and Post Offices are trained to spot the warning signs that suggest someone may be falling victim to a scam before alerting their local police force to intervene and investigate.

Last year, £60.7million was stopped through the scheme, according to figures from UK Finance, thanks to 10,072 phone calls made to the police by branch staff. 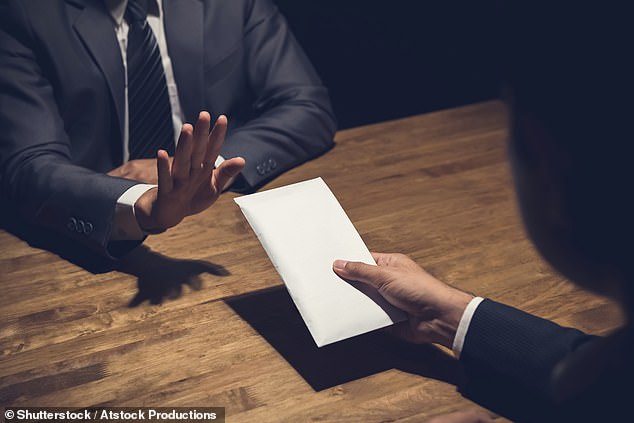 Stopped: Branch staff at banks, building societies and Post Offices have worked with the police to stop £202.8m of fraud through the rapid scam response scheme.

It means that 34 per cent more fraud was stopped by the scheme last year than in 2020 – although, branches were more likely to have been closed for longer thanks to the pandemic.

In total, since the scheme launched, it has prevented £202.8million of fraud.

It has also led to the arrest of 162 suspected criminals last year, bringing the total number of arrests to 1,005 since the protocol began.

One such case in which fraud was successfully spotted by branch staff last year, involved an elderly man who went to his bank branch attempting to transfer £10,000 from his bank account to another.

He had received a call two days earlier from someone claiming to be from a bank security team who had said that an employee was taking money from customer accounts.

The man was asked to transfer money from his account to a new one so they could monitor it.

He was told to tell branch staff that he was using money for home improvements, which he duly did.

However, during his conversation with the bank, the staff became suspicious and invoked the Banking Protocol and the police were called.

The police took the customer home and found he had downloaded remote access software to his laptop on the fraudster’s instructions.

A separate bank account had been set up in his name and multiple transactions had been made.

The payments were stopped and safeguards placed on the account. The individual was also referred to Victim Support for additional assistance.

Katy Worobec, managing director of economic crime at UK Finance said: ‘The Banking Protocol has helped to prevent tens of thousands of people from becoming victims of fraud.

‘Its success shows the importance of joint work between the police and banking industry, not only to protect customers but also to tackle the criminals behind these scams.

‘Bank staff are trained to spot scams and as part of the scheme will assist customers by asking various questions when they are withdrawing or transferring money to help keep them safe.

‘Criminals are always changing their tactics so it’s important to follow the advice of the Take Five to Stop Fraud campaign, and remember that a bank or the police will never ask you to transfer funds to another account or to withdraw cash to hand over to them for safe-keeping.’

Which types of scams are being prevented?

The scheme is often used to prevent impersonation scams, in which criminals imitate police or bank staff and convince people to visit their bank and withdraw or transfer large sums of money.

It is also used to prevent romance fraud, in which fraudsters use fake online dating profiles to trick victims into transferring money, and to catch rogue traders who demand cash for unnecessary work on properties.

How to protect yourself and others

– Be wary of those offering to do repair work on a property. Request a written quote and compare with other reputable companies.

– Never pay in full up front until work is completed

– Don’t feel pressured to agree on work. Insist on taking your time

– Never be embarrassed to report a scam

The scheme has also been expanded to cover attempted bank transfers made by customers through telephone and online banking, with 42 out of 45 police forces across the UK signed up to help tackle this.

It means staff working in call centres and in online banking teams will notify the police when attempted bank transfers are being made which they believe may be the result of a scam.

The customers will be first asked by the bank or building society to visit their local branch to enable branch staff to carry out additional checks.

However, if the customer is unable to visit their branch, staff would be able to directly alert the local police who will make a visit to the customer’s home and assess whether they have fallen victim to a scam.

Clinton Blackburn, temporary commander, from the City of London Police, said: ‘The Banking Protocol continues to be one of the most vital ways of protecting vulnerable victims and preventing criminals from taking advantage of them, as banks are often the first point of contact when someone is about to fall victim to fraud.

‘Partnership working across the finance sector is crucial in protecting people against fraud.

‘It is great to see that the Banking Protocol is working so well and has prevented such significant losses to fraud since its inception in 2016.’

Stop: Taking a moment to stop and think before parting with your money or information could keep you safe.

Challenge: Could it be fake? It’s ok to reject, refuse or ignore any requests. Only criminals will try to rush or panic you.

Protect: Contact your bank immediately if you think you’ve fallen for a scam and report it to Action Fraud.

THIS IS MONEY’S FIVE OF THE BEST CASH ISA DEALS

MIDAS SHARE TIPS UPDATE: Octopus is a buy for the brave