The world of cryptocurrency is dominated by the entity which started it all; Bitcoin. It is the oldest, most valuable, and best known digital currency by a distance.

The number two by all these measures is Ethereum. Its value has actually risen faster in recent times but it does not receive anywhere near the same attention as Bitcoin.

Ether, the coin which powers the Ethereum network, has soared almost sevenfold in the last 12 months and is now valued at north of $1000.

So how does Ethereum differ to its better known brother Bitcoin? What are its great strengths and weaknesses, and how stable is it?

Ethereum is more of a decentralised computer platform than a cryptocurrency. Ether is the technology’s actual currency and can be bought through exchanges or digital wallets

It is a virtual currency founded in 2015 by Russian-born Canadian Vitalik Buterin, who also started Bitcoin Magazine as a teenager and had written a white paper on Ethereum two years before its founding.

Like Bitcoin, currently with a market capitalisation of over £452.4billion, Ethereum is a decentralised currency, so it does not require a central bank or financial institution to issue it.

Both use blockchains, the digital ledger technology where transactions are recorded and validated using a peer-to-peer network of computers rather than a single organisation.

What are the main differences with Bitcoin?

Simon Peters, a cryptocurrency analyst at eToro says Bitcoin has a single goal: ‘To become a global decentralised digital currency’ that can be used as a form of payment in shops and accepted by businesses. 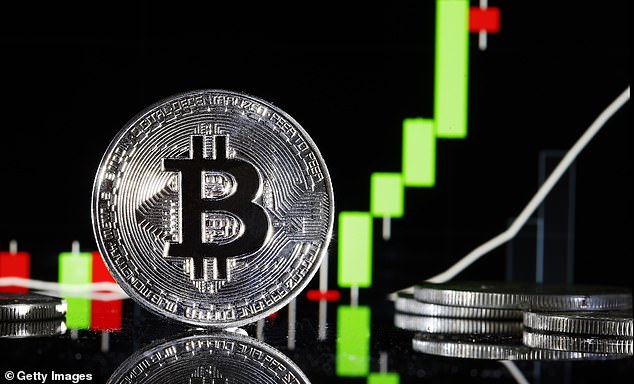 Bitcoin is a much larger virtual currency than Ethereum, with a market cap of £452.4billion

Ethereum hosts a collection of ‘decentralised applications’ or Dapps, where people can use Ether to pay for services such as finance, social media, and gaming.

Bitcoin also uses a proof-of-work consensus mechanism rather than a proof-of-stake algorithm, though each of them helps avoid double-spending, a common bugbear among cryptocurrencies.

What can Ethereum be used for?

A primary function of Ethereum is as a host of ‘smart contracts.’ Running on the platform’s blockchain, they resemble regular contracts, but lack middlemen like lawyers to oversee them.

Say you want to raise for an animal welfare charity. On a crowdfunding website like Kickstarter, you would set a fundraising target and hope people donate enough money to hit that goal. When the target is hit, Kickstarter then pays out.

The top performing cryptos over the last year

While Bitcoin and Ethereum are by far the best known and widely held cryptocurrencies they are a long way off being the best performing in terms of their price rises.

According to cryptocurrency site Nomics.com you could have made a remarkable 11,450 per cent if you had bought HEX a year ago, while several others also achieved percentage gains in the thousands.

As is always the case with any asset, past returns do not indicate future returns.

HEX is a blockchain based version of a type of fixed term bond, known as a certificate of deposit.

Launched in December 2019, HEX is part of the DeFi (decentralised finance) ecosystem built on the Ethereum network.

HEX users can ‘stake’ their coins for set time periods in exchange for a share of the new coin issuance, and thereby generate passive income.

Kusama is described as a ‘canary network’ for Polkadot, which is a recently developed blockchain offering similar capabilities to Ethereum.

Kusama says it offers ‘a proving ground for runtime upgrades, on-chain governance, and parachains’. In other words, a place to experiment with blockchain technologies.

Celsius describes itself as ‘a platform of curated services that have been abandoned by big banks – things like fair interest, zero fees, and lightning quick transactions.’

Users can lend and borrow money through using the protocol, without having to go through a bank.

Band Protocol says it ‘ensures interoperability between smart contracts and the rest of the world.’ In simpler terms it uses blockchain tech to deliver live data to smart contracts running on Ethereum. For example, the live price of particular commodity being sent into a DeFi smart contact. It is a competitor to fellow ‘oracle’ protocol Chainlink.

Yearn is one of the most prominent decentralised finance protocols. It allows users to deposit cryptocurrencies which are then borrowed by other people who pay interest to the lenders. It also allows various crypto assets to be used as collateral to take out loans, without any need for credit checks.

With a smart contract, there is no third-party facilitator whom you and the donors trust to pay out once the target is reached. Instead, a payout is made automatically once your target is achieved.

This is all enabled by the Ethereum Virtual Machine, something cryptocurrency firm Coinbase describes as ‘like a giant, global computer made up of many individual computers running the Ethereum software’ that allows programmers to operate the smart contracts.

Ethereum has given birth to ‘DeFi’, or decentralised finance. This is a burgeoning industry which allows users to lend and borrow money in a peer-to-peer context without banks or other middle-men.

Defi coins are used to interact with the Ethereum smart contracts which  the protocols run on.

Notable examples include HEX, which has seen the fastest rise in price of any cryptocurrency over the past 12 months, climbing over 11,000 per cent, according to cryptocurrency data site Nomics.

DeFi is unregulated and there is no way to get your money back if something goes wrong so as with all cryptocurrency related things, it should be approached with a high level of caution and following plenty of research.

What are Ethereum’s main strengths and weaknesses?

Transactions take less time to be processed on Ethereum – about 10 to 15 per second against three to five per second on Bitcoin.

Recently, Ethereum transferred to a new blockchain known as Beacon chain that uses a proof-of-stake consensus algorithm to help run Ethereum 2.0. a new form of cryptocurrency. 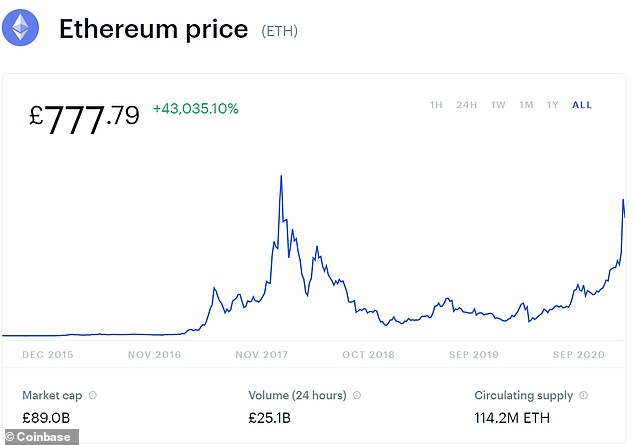 Konstantin Anissimov, of digital currency exchange CEX.IO, says that Ethereum 2.0 will eventually process 15,000 transactions each second, outpacing any centralised payment systems such as a bank.

This will be achieved through a process of sharding, which enhances a database’s capacity and scalability by spreading data from a single large database across separate database servers to manage the load.

Is Ethereum a more stable currency than Bitcoin?

Where Bitcoin goes, Ethereum tends to follow. If Bitcoin is on a bull run, then Ethereum usually experiences the same phenomenon. And when the price of the former goes down, the latter drops likewise.

Interactive Investor’s Myron Jobson says: ‘There is a sentiment that the cryptocurrency market is very much led by movements in the price of Bitcoin. 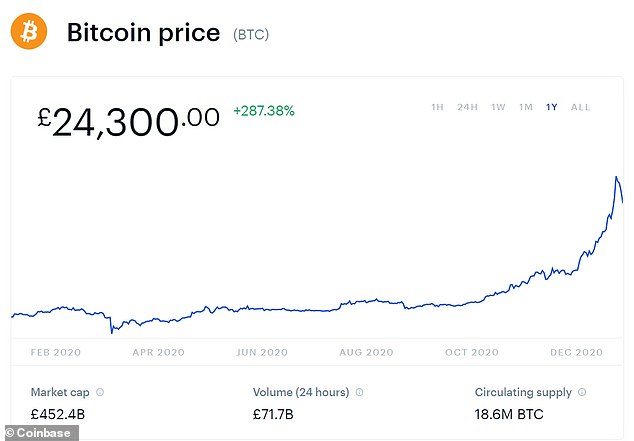 Since December, the price of Bitcoin rose from $20,000 to a record high of $42,000 last week. But within four days of reaching that figure, its value had plunged by a fifth

Bitcoin’s price is known to oscillate wildly. Over 2017 and 2018, both currencies saw a huge boom and bust, especially Ethereum. It skyrocketed from less than £7 to over £1,000 before falling back to just over £70 in November 2018.

Since December, Bitcoin rose from $20,000 to a record high of $42,000 last week. But within four days of reaching that figure, its value had plunged by a fifth, while Ethereum’s value fell by an even higher percentage.

Whether prices will return to a more stable equilibirum is hard to determine. But as Jobson says, when it comes to investing in cryptocurrency, ‘the importance of doing your research before buying cannot be understated.’

The Masked Singer: Who is Badger? Here’s what we know

Mask-slipping is the new man-spreading: Why can men STILL not seem to cover their noses?