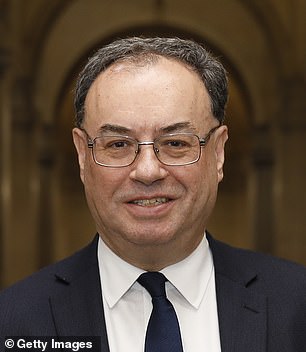 Bank of England Governor Andrew Bailey is braced for a major test of his credibility as Britain faces the biggest rise in interest rates for nearly three decades.

Speaking earlier this month at Mansion House in the heart of the City of London, Bailey warned that a 0.5 percentage point jump in rates will be ‘on the table’ when the Monetary Policy Committee (MPC) meets this week.

That would be the biggest leap in UK rates since 1995. The MPC was created in 1997 and until now the Bank has preferred to raise rates by 0.25 percentage points at a time.

The European Central Bank lifted rates by 0.5 percent points just ten days ago and the US Federal Reserve last week announced an increase of 0.75 percentage points.

The Bank of Canada went further – raising rates by 1 percentage point in a bid to crush inflation.

The significant increases elsewhere in the world have piled pressure on the Bank of England to follow suit.

Laith Khalaf, head of investment analysis at AJ Bell, said: ‘I think a 0.5 per cent rate hike is pretty much nailed on and if it doesn’t materialise, Andrew Bailey will be in the firing line once again for misguiding the market.’

Simon French, chief economist at Panmure Gordon, said: ‘The Bank and Governor have been clear that – if inflation threats intensify – there will have to be larger interest rate rises. These parameters have been met. As such, if they don’t deliver, then credibility is at risk.’

The Bank of England has raised interest rates five times since December – taking them from 0.1 per cent to 1.25 per cent – in a desperate attempt to tackle soaring inflation, which has hit a 40-year high of 9.4 per cent. It looks almost certain to rocket into double figures this autumn.

Despite the global response to rising inflation, economists in Britain are split over whether the Bank will raise rates to 1.5 per cent or 1.75 per cent on Thursday.

Bailey has been criticised by many for not acting fast enough to prevent a cost of living crisis in the aftermath of Russia’s invasion of Ukraine, which has sent energy and food prices soaring.

However, there are fears that a more aggressive stance on rates will risk tipping the economy into recession.

One of the City’s most closely watched and reliable economic indicators is signalling that a recession may be looming.

The warning sign is flashing in interest rates offered on UK Government debt, known as gilts. Normally when investors buy sovereign debt they are compensated with higher returns the longer they lock away their money.

But in recent weeks the return – or yield – on gilts held for the short term has been almost the same as those held for he longer term. This so-called ‘yield curve inversion’ has heralded every recession in the US since 1955.

Last week, the US contracted for a second consecutive quarter. This technical definition of a recession came after the yield curve there inverted earlier this year.

The London School of Economics has found evidence that the gilts market anticipated almost every downturn in the UK economy as far back as the early 1800s.

He added that quantitative easing has distorted the market.

GB News: Brits getting fatter for being ‘too soft’ on obesity, warns expert