Isa savers have seen more than half a billion pounds wiped off the value of their savings in the last 12 months as the cost of living outstripped ultra-low savings rates.

The market value of tax-free cash savings hit £316.2billion at the end of the 2019-20 tax year, according to new figures from HMRC, after close to £50billion was paid into new and existing accounts.

It represented a £4.8billion rise on the amount paid into accounts in 2018-19, with the number of cash Isas which saw money saved into them increasing by 1.2million. 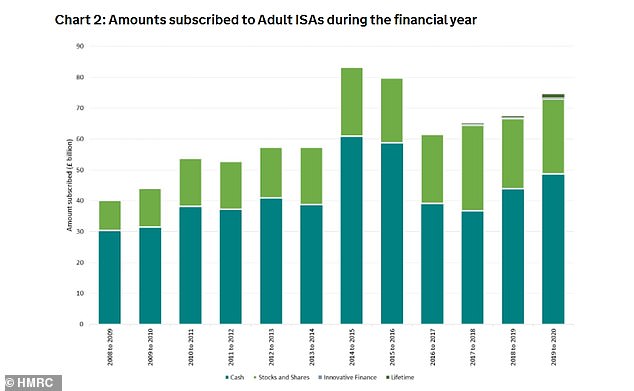 With March and the first few days of April seeing the start of the country’s first lockdown in the face of the coronavirus pandemic, extra lockdown savings helped push cash Isa savings to a four-year high.

However, record low savings rates means much of that money has been losing its value in real terms after inflation is taken into account.

Per data from the Bank of England, the average rate on cash Isas between March 2020 and April 2021 was 0.46 per cent, with tax-free rates at 0.4 per cent on average since last November.

Meanwhile over the same period consumer price inflation has been at 0.65 per cent, according to the Office for National Statistics, and has recently began to rise sharply.

Few available savings accounts still match or beat the current Consumer Prices Index reading of 1.5 per cent, a figure that is still below the Bank of England’s 2 per cent target and could spike further over the next few months.

As a result, although that tax-free cash pile of £316.2billion would have earned £1.46billion gross interest over the last year, after inflation was accounted for £540million would have been wiped off that money. 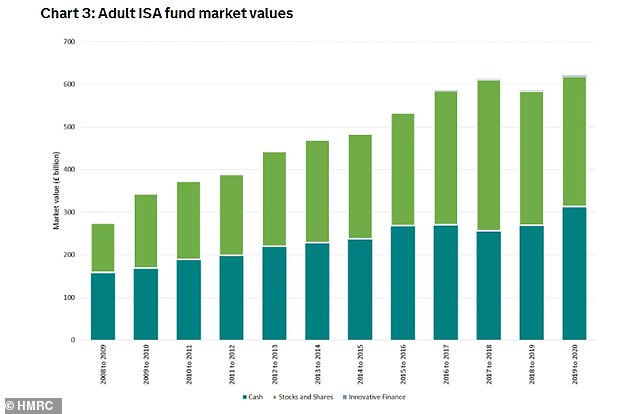 Cash Isa balances totalled £316.2bn at the end of the 2019-20 tax year. However, low savings rates will have seen the value of that money eaten away by inflation

Unfortunately, for those savers not comfortable with investing as they feel they need access to their money over the next few years, there are few good options. The best easy-access rate available is 0.5 per cent and the best easy-access Isa 0.47 per cent.

The market value of stocks and shares Isas fell 9 per cent between 2018-19 and 2019-20, according to the latest figures from the taxman, after billions of pounds were wiped off global stock markets in the spring of 2020 as the pandemic raged across the world.

And while those savers with excess money they do not need should certainly consider investing it, even in a lower-risk portfolio designed to mitigate inflation, at the very least they should ensure they are saving into the highest-paying account they can.

However, too many are still failing to do this. There was £244.6billion held in non-interest earning accounts at the end of this April, according to the Bank of England, after another £6.73billion was added two months ago.

If that money was earning even 0.5 per cent, it would result in an extra £1.83billion in interest a year paid to savers.