This week marks the 50th anniversary of the Honda Civic — and the opening of order books for the new 11th generation of the family favourite.

Since 1972 more than 27.5 million Civics have been sold globally — millions of them built here in the UK and some of those even exported back to Japan.

It was on July 12, 1972 — with teen heart-throb Donny Osmond’s slushy Puppy Love topping the UK pop charts — that the new Civic was launched. 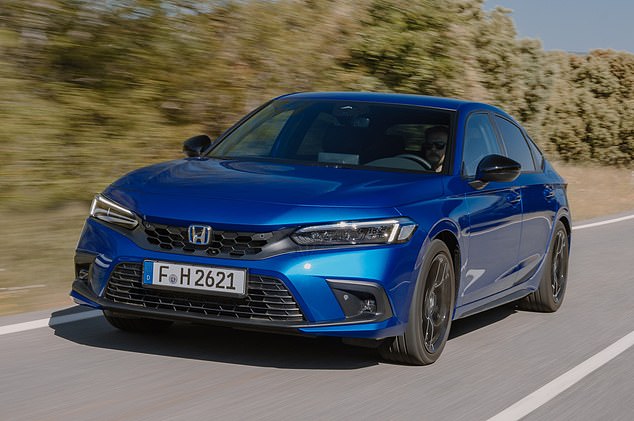 Order books for the new 11th generation Civic e:HEV opened this week ahead of cars landing in dealerships in September and first customer deliveries in October

That launch started an automotive revolution which transformed the motoring landscape in Britain.

And Honda is spending this month celebrating, with the world premiere of the sporty Civic Type-R model — in its 25th anniversary year — launched on July 21.

The Civic arrived in the UK in 1972, a year of political, economic and industrial turmoil, with the then Tory Government struggling to combat soaring inflation and militant trade unions. Almost 24 million working days were lost that year.

Against this background, the arrival of the new Honda Civic, along with cars from other Japanese makers such as Toyota, Nissan (then Datsun) and Suzuki, had a profound effect.

Suddenly, here were cars that were reliable, affordable and fully stocked with kit. Sure, many of the interiors may have been a bit iffy and plastic. But what great value for money they were. And they rarely, if ever, broke down.

They were a far cry from vehicles built in strike-bound UK car factories producing vehicles of questionable quality and reliability, where militant shop stewards were demanding ‘down tools’ at the drop of a hat.

In sharp contrast to the tired, old-fashioned practices and customs in the UK, Japanese firms such as Honda were producing cars using new ‘just in time’ production techniques that put great emphasis on both quality control and efficiency. 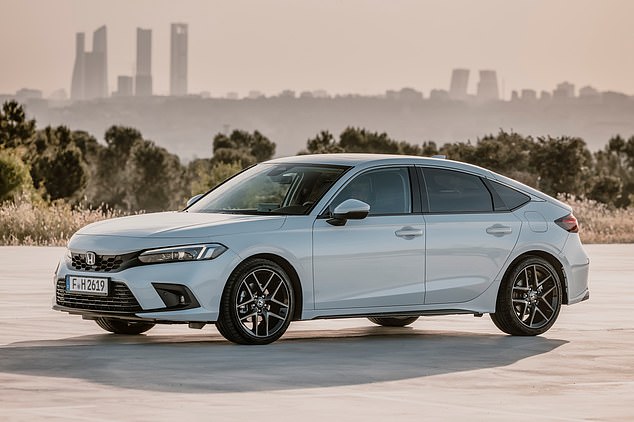 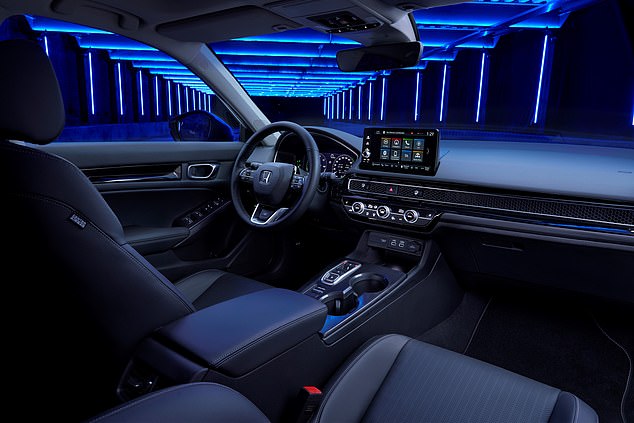 Update: The interior of the new Honda Civic – a radical change from the 1972 original

Honda was founded in 1948 by Soichiro Honda, a blacksmith’s son who was born in 1906 in a small village near Mount Fuji.

Fascinated by machines, he helped out in his father’s bicycle repair business and when he saw his first car, vowed his life would change for ever.

Realising the need for cheap and simple motorised transport, in 1946 he began retro-fitting surplus generator engines on to bicycles.

He developed this the following year to produce the Honda A-Type motor-bicycle and within months had set up his first conveyor line.

In 1948, he established the Honda Motor Company with just 34 employees and the following year launched the first motorcycle fully designed and developed by Honda from the ground up, called the ‘Dream’ D-Type.

During the 1950s Honda grew to become the biggest motorcycle brand in Japan — now the world — but it was in Britain at the Isle of Man TT races that the firm began its global ascent.

Honda’s 1958 debut proved disappointing. But Soichiro, who said ‘success is 99 per cent failure’, returned three years later to dominate the event, then build motorcycles in Belgium from 1962, and by 1965 was winning in F1 Grand Prix racing too.

For 15 years from 1979, Honda worked in the UK collaborating with the Rover Group.

When the incoming Thatcher Government privatised Rover by selling it to British Aerospace (BAe), Honda took a 20 per cent stake, jointly producing cars such as the Triumph Acclaim and Rover 800 (Honda Legend), as well as the Rover 200, 400, and 600 models.

They included the Civic hatchback (from 1994 until shutdown), Civic Type-R hot-hatch, Jazz, Accord, and CR-V off-roader before its closure with the loss of 3,500 jobs in 2021. Nissan and Toyota continue to build cars in the UK.

The Civic has adapted over the years from the first generation ‘Civic for all citizens’ to the 1980s angular design of the third generation which came with three door options, the seventh generation Millennial offering petrol-electric hybrid, and the tenth generation with advanced safety features.

Order books for the new 11th generation Civic e:HEV (it stands for Hybrid Electric Vehicle) opened this week ahead of cars landing in dealerships in September and first customer deliveries arriving in October.

The powertrain shifts seamlessly between pure electric EV mode, hybrid and engine driving. Producing 184 horse-power, it promises up to 60 mpg and CO2 emissions from 108g/km, and accelerates from rest to 62 mph in 7.8 seconds with a top speed of 112mph. It also fulfils the Japanese car maker’s plans to electrify all mainstream models by the end of this year.

The new Civic’s fastback styling is evolutionary rather than revolutionary, with a sloping roof and an extra 35mm on the wheelbase.

Rebecca Adamson, head of Honda UK’s car division said the launch of the all-new Civic, marks ‘an important milestone for the brand’, adding: ‘It has once again set the benchmark in practicality, efficiency, performance and safety, tailored to modern customer demands.’

If you are tempted to make the jump to an electric car but lack sufficient confidence, knowledge of the market, or simple ‘hands-on’ experience, then help is at hand.

Electric car-charging chain Gridserve is launching a new electric test-car programme for would-be customers at its forecourts in both Braintree, Essex, and Norwich. Each site will also have shops, cafes, relaxation areas and a small gym.

It all kicks off tomorrow as it launches a test drive programme at its first EV Awareness Day of 2022. 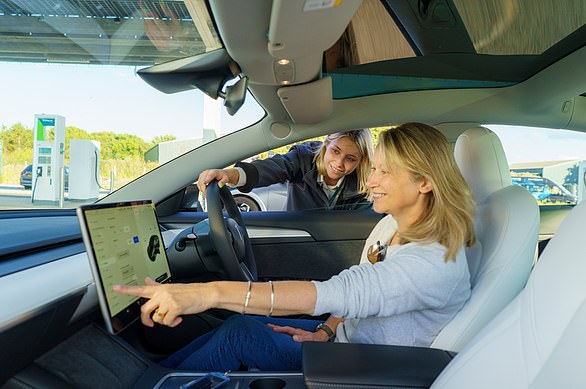 Drivers are invited to book to try out a range of cars — including the Tesla Model 3 and Model Y, Polestar 2, Mercedes EQB and the latest Nissan Leaf — and to lease one if it takes their fancy.

Gridserve will allow drivers to experience the best electric vehicles on the market from a variety of car makers — and drive them back to back.

Motorists will also be offered impartial advice, be able to find out more about charging options and explore leasing offers.

Gridserve says: ‘This one-stop solution will save interested customers time, so they don’t have to visit multiple car showrooms to test drive the latest cars.

‘It makes back-to-back test drives possible, ensuring drivers have a chance to compare and contrast, ask for advice and, ultimately, find the best car for them. It really is a one-stop shop to test, lease and charge.’

Test drives are bookable online at (gridserve.com/test-drive), with customers able to choose a time and date that suits them.