Currys has given its 10,000 hourly-paid staff another pay rise in a bid to retain and attract workers amid shortages and the soaring cost of living.

It is the third time it hikes pay in 13 months, coming just a month after the latest rise came into effect, the company said. 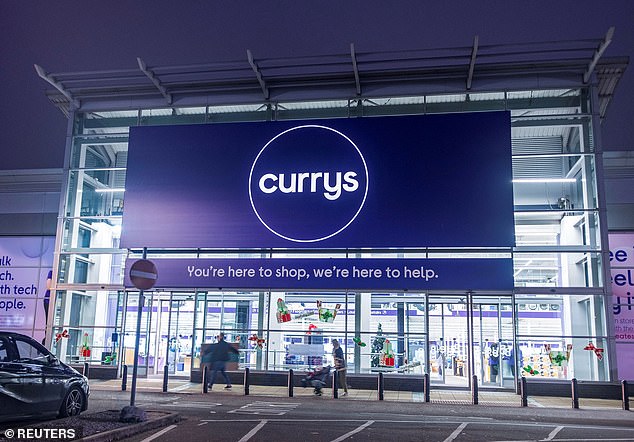 Pay rise: Currys said it had bumped up pay again due to the ‘current economic climate’

Currys, which has more than 300 stores, has now increased hourly pay by 15.6 per cent in just over a year.

It said it took the decision to bump up pay again after an extensive review by its ‘cost-of-living group’ it set up earlier this year.

‘While the last hourly rate rise only came into effect last month, the current economic climate and feedback from colleagues has led Currys to boost rates again now, ahead of (and in addition to) the next regular pay review.’

The company is also offering a discount of between 3 per cent and 5 per cent every week on shopping at major supermarkets such as Asda, Morrisons and Sainsbury’s.

And it said it has a wide range of support available to employees, including mental health master classes, staff discount on products and ‘crisis loans’.

Retailers have been struggling to retain and attract workers since the pandemic, especially lorry drivers, forcing them to hike pay.

Over 450 jobs with Currys are currently advertised on job search site Indeed, with over 50 of them for drivers.

The company is the latest in a string of retailers to have repeatedly increased pay this year.

Earlier this month, Sainsbury’s announced its second pay rise as part of a £25million package to help staff with the cost of living crisis.

John Lewis also increased the entry level pay for its employees by 4 per cent along with a £500 one-off payment, although it warned staff may have to forego their usual annual bonus.

Currys chief executive, Alex Baldock, said: ‘Every day, I hear from colleagues who are feeling the impact of the rising cost-of-living and we’re determined to do what we can to help.

Are your teeth wobbly? Loose teeth could be a sign of mouth cancer, dentist warns