Thousands of City bankers paid bonuses in dollars by their Wall Street employers are toasting a triple mini-Budget boost after the plunge in the pound.

It means that their payouts in the US currency at the end of the financial year will be higher when translated into sterling.

Highly paid London finance workers were already in the money after Kwasi Kwarteng scrapped the cap on bankers’ bonuses and axed the higher 45 per cent tax rate on annual pay of more than £150,000. 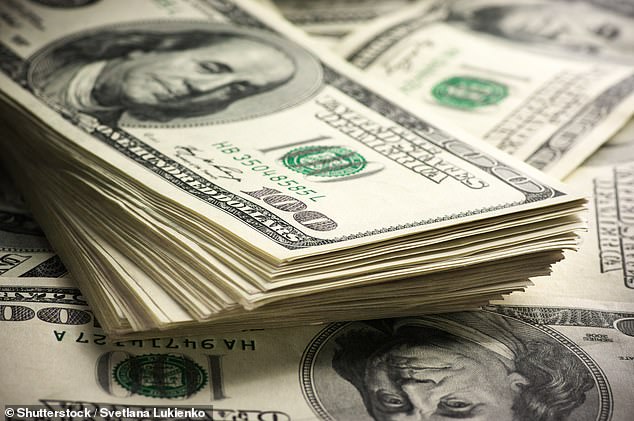 Quids in: Bankers’ payouts in the US currency at the end of the financial year will be higher when translated into sterling

But for those employed by New York banks and in line for dollar payouts, the hours after the announcement – as the pound plummeted by more than 3 per cent to a new 37-year low – promised to create a further boost.

The pound nosedived to close to $1.08 on Friday. It has lost around 20 per cent of its value so far this year.

Neil Wilson, chief market analyst at Markets.com, said: ‘Kwasi’s budget is a big boost for American bankers in London, although dollar earners have been doing well for some time.

‘We might see a lot more decide to come over from New York as well.

‘Americans have tended to stay away from London for the past decade or so for a host of political and economic reasons. But expect to see them shopping in Harrods again.’

Luke Hildyard, director of the High Pay Centre, said: ‘It’s hard to believe that bankers could get a triple windfall from the scrapping of the bonus cap, the lowering of their tax rate and advantageous currency fluctuations while most of the population are hit by a cost of living crisis. Policymakers must address painful divides in this country.’

Mark Freebairn, partner at executive recruitment firm Odgers Berndtson, said the currency fluctuation could have a mixed impact on those in the UK earning bonuses in dollars, depending on how the value of that bonus is determined.

For example, a UK banker might be paid based on the dollar value of earnings they bring into the bank, which will be lower if the pound falls.

However, bonuses are worked out in different ways and many will stand to benefit. ‘If you are trading in sterling and your performance is judged on the basis of sterling but you are paid in dollars then you are laughing,’ Freebairn said.