English winemaker Nyetimber predicts it is on course for a record harvest despite this summer’s extreme weather.

Hot, dry conditions made for a ‘challenging’ period early in the season though it became cooler and wetter later.

The Sussex-based company said its Chardonnay, Pinot Noir and Pinot Meunier grapes were ‘predicted to be of high quality’ this year. 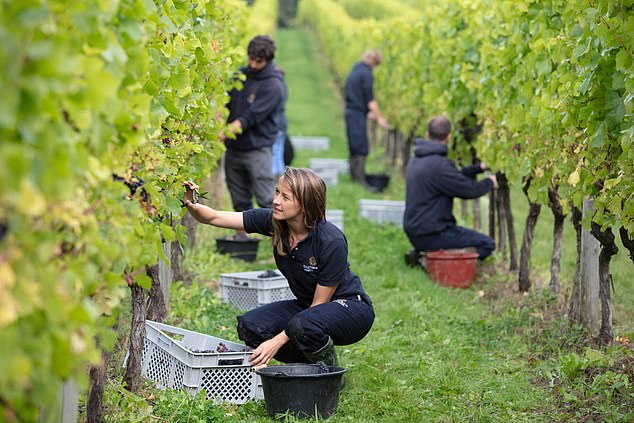 Record harvest: A yield of more than 1,600 tonnes should produce more than one million bottles of sparkling wines

Nyetimber begins its harvest on Thursday over a record area of 803 acres at its vineyards in West Sussex, Hampshire and Kent.

A yield of more than 1,600 tonnes should produce more than one million bottles of sparkling wines.

Nyetimber says it accounts for more than 10 per cent of the total English sparkling wine market and expects to make two million bottles a year by 2026.

Its wine is sold at venues including the Ritz and the Savoy hotels in London and exported worldwide.

Head winemaker Cherie Spriggs said: ‘We have the experience to make the most of the climate in which we grow our grapes. The quality looks fantastic.’

‘Extends their life!’ ‘Best spot’ to keep your orchids in winter to keep them ‘strong’