Europe set for another rate hike as prices surge: Inflation now at a record 8.9% across the single currency area with recession looming

Official figures confirmed that annual price growth hit a record 8.9 per cent in the eurozone, but was even higher when including EU countries outside the single currency area.

Data published on Wednesday showed UK inflation above 10 per cent for the first time in four decades. 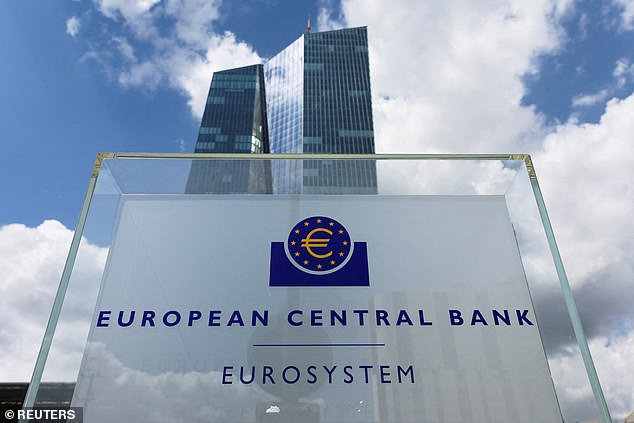 Inflation has been spurred on by Vladimir Putin’s invasion of Ukraine, which has pushed up energy prices, and is still going up in Britain and Europe.

In contrast, the US, where energy markets are far less connected to the whims of the Kremlin, has seen inflation slip back from its peak.

Isabel Schnabel, a member of the European Central Bank’s rate-setting board, said Europe’s inflation outlook had failed to improve since a surprise half percentage point interest rate hike last month.

She told the Reuters news agency that the concerns which had motivated that hike ‘have not been alleviated’.

‘I do not think this outlook has changed fundamentally,’ Schnabel said. ‘I would not exclude that, in the short run, inflation is going to increase further. These inflationary pressures are likely to be with us for some time; they won’t vanish quickly.’

She added that it would ‘take some time’ before inflation falls back to the ECB’s 2 per cent target.

The comments implied that Schnabel will argue for another half-point hike in September. 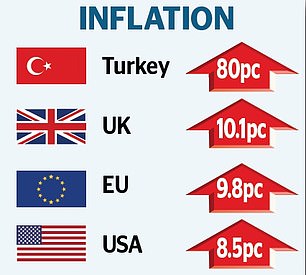 However, any appetite for rate hikes would be cooled if the closely watched purchasing managers’ index figures – due next week – point to an economic slowdown.

A complication for the ECB as it tries to tame inflation is that a recession is looming, which could be exacerbated by rate hikes.

Schnabel acknowledged the slowdown fears could worsen should gas supplies from Russia that are already being choked off to a trickle are reduced further.

Germany – which is also suffering because of low water levels on the Rhine, a major industrial artery – looks set to be hit the hardest.

But Schnabel added: ‘Even if we entered a recession, it’s quite unlikely that inflationary pressures will abate by themselves. The growth slowdown is then probably not sufficient to abate inflation.’

Yesterday, German Chancellor Olaf Scholz acknowledged that soaring energy costs were ‘a big burden for many citizens’ as he announced a temporary cut in VAT on natural gas, from 19 per cent to 7 per cent, until March 2024.

In the United States, data showing falling unemployment claims yesterday helped allay fears that the economy is in recession.

That could give more leeway for its central bank, the Federal Reserve, which has already been hiking interest rates aggressively to try to tame inflation, to proceed with further increases.

The Fed is expected to raise rates by half or three-quarters of a percentage point next month. 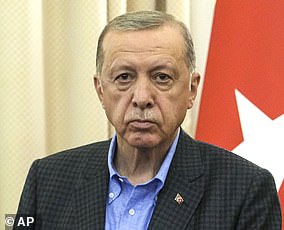 Turkey has slashed interest rates, despite inflation soaring to 80 per cent.

In the latest step of the unorthodox policy advocated by President Erdogan, the country’s central bank cut rates from 14 per cent to 13 per cent to try and boost economic growth.

The Turkish lira tumbled on currency markets as stunned investors ran for cover.

‘I am speechless. It is not the obvious thing to do at all,’ said Kieran Curtis, fund manager at Abrdn in London.

'Economics of an asylum!' Truss and Kwarteng slammed for not cutting fuel duty