A Chinese property giant suffered a plunge in profits in the first half of this year amid a growing crisis in the country’s property sector.

Country Garden, which is based in the city of Foshan and is China’s largest real estate firm by sales, reported its half-year core profit had fallen to between £550million and £612million from £1.9billion a year earlier.

The plunge was blamed on a sharp downturn in the market, as well as the effects of the Covid-19 pandemic and movements in foreign currency markets. 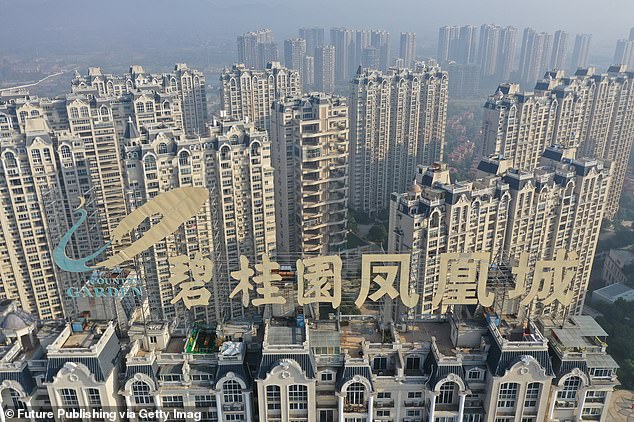 Country Garden, which is China’s largest real estate firm, reported its half-year profit had fallen to between £550m and £612m from £1.9bn a year earlier

The bleak results underscored the problems gripping the Chinese property market following the high-profile collapse last year of Evergrande, which at the time was the world’s most indebted developer with liabilities totalling over £250billion.

Unlike Evergrande and others, Country Garden has managed to avoid defaulting on its own debts, helped by its ability to access cash from foreign markets.

But the company and its rivals now face fresh difficulties as Chinese homeowners have begun to stop making mortgage payments in protest against unfinished houses, threatening to intensify the industry’s cash crunch.

While the government has stepped in with billions of pounds worth of loans to bail out struggling real estate projects and prop up the industry, investor confidence appears to be on the wane.

Country Garden’s shares dropped by over 5 per cent on the Hong Kong Stock Exchange, taking its losses to nearly 65 per cent for the year to date.