Fevertree Drinks has maintained its full-year outlook amid continued high demand in the US and a rebound in trade at UK hospitality venues.

The tonic water maker downgraded its annual underlying earnings forecast to between £63million and £66million back in March, following a surge in commodity prices caused by Russia’s full-scale invasion of Ukraine.

But due to the recovery of its ‘on-trade’ business and expectations that this channel would experience a whole year of uninterrupted trading, the company said it expected revenues to grow by around 14 to 17 per cent this year. 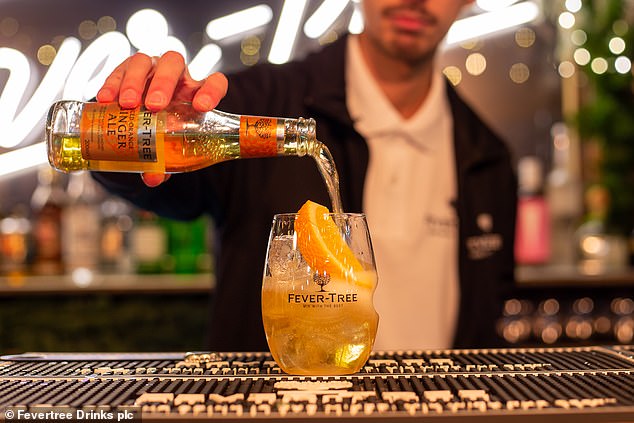 Rebound: Fever-Tree has seen a recovery in sales at UK pubs, bars and restaurants after restrictions introduced in response to the Omicron variant’s emergence were relaxed

Fevertree still expects to achieve sales of between £355million and £365million in 2022, thanks to ‘solid’ trading so far this year, which has been upheld by high consumer orders in the US.

Demand in this market has climbed ‘well above’ pre-pandemic volumes, including by more than 150 per cent in ‘off-trade’ premises, such as supermarkets, off-licences and shops.

Back in the UK, Fevertree has seen a recovery in sales at pubs, bars and restaurants in recent months after Covid-related restrictions introduced in response to the Omicron variant’s emergence were relaxed.

Though the hospitality sector in England was not as directly affected by these rules, they did lead to many Britons being discouraged from eating out and many businesses cancelling their traditional Christmas parties.

Yet since these restrictions have loosened, the group has noted that on-trade demand has ‘continued to see momentum build month to month’ as consumers have shifted their spending back to hospitality venues.

‘Our brand strength, growing presence, and the close relationships we have built with our partners puts us in a strong position to take advantage of the consumer appetite to return to social occasions out of home,’ the firm remarked. 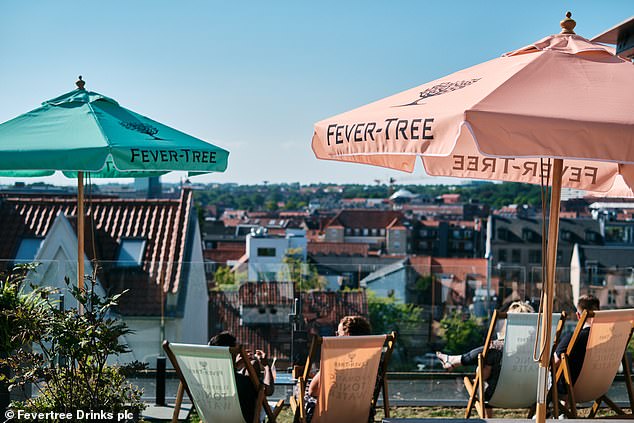 Big in USA: Fever-Tree only launched its American operations about four years ago, yet it has already surpassed Schweppes as the country’s leading tonic water brand

Fevertree added that as the country moves into the summer months, it had ‘strong plans in place with retailers,’ including during the upcoming Platinum Jubilee celebrations next month.

Outside the UK, the West-London based firm remains the top clear premium mixer seller in Australia and Canada, and has observed ‘encouraging’ sales and value share rises across its largest markets in Europe.

However, supply chain problems, including higher costs and delays in shipping products to the US, are continuing to cause some short-term uncertainty for the company.

To try and rectify these problems, Fevertree is expanding operations at its bottling plant on the US east coast, that it hopes will also reduce carbon emissions in its supply chain.

Given the size of the US market, Hargreaves Lansdown equity analyst Matt Britzman said the moves were ‘positive steps,’ although he warned that margins are forecast to drop this year.

Fevertree Drinks shares were 1 per cent lower at £15.08 this morning after the trading update was released, meaning their value has plunged by 44 per cent in the past six months.

Britzman added: ‘There are some positives for the longer-term investment case, growth outside of the saturated UK market looks promising, and increased demand for premium alcohol and mixers looks to be stickier than first anticipated.

‘However, when investors are expected to pay 36 times earnings for a slice of the pie, in today’s world, those margins need to start moving in the right direction.’

Fevertree only launched its American operations about four years ago, yet it has already surpassed Schweppes as the country’s leading tonic water brand.

The United Kingdom remains its largest market by far, but around a quarter of its revenue now derive from the US following a pandemic-induced boom in making long mixed drinks at home. 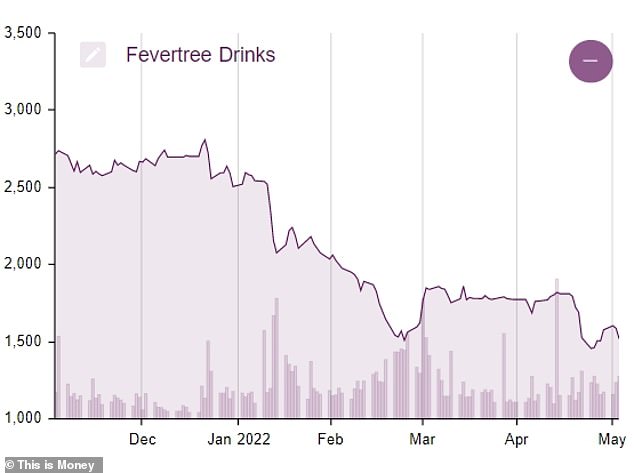 Decline: Fevertree Drinks shares have plummeted by 44 per cent in the past six months

This July 4th, COVID is still killing hundreds of Americans each day