The privatisation fever that swept the UK in the 1980s has come to Dubai. The Dubai Electricity and Water Authority (DEWA) is the first of ten state companies to list on the Dubai Financial Market exchange.

Shares in the company surged around 20 per cent on their debut yesterday, in the first listing of its kind in the region and the biggest in the Middle East since Saudi oil giant Aramco went public in 2019. 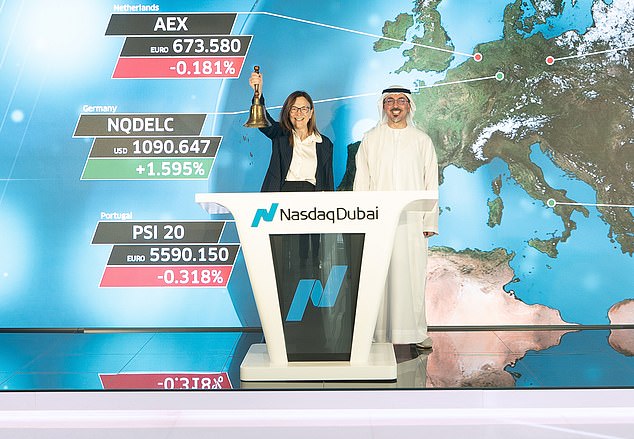 Everyone involved pulled out the stops to make a success of the float, which is the first step in a plan aimed at increasing activity on the Dubai stock market.

In an updated version of the UK’s ‘Tell Sid’ campaign to persuade the public to purchase British Gas shares in 1986, DEWA customers were sent emails and text messages telling them about the IPO.

The aim, however, is not so much to create a version of Margaret Thatcher’s shareholder democracy, as to boost capital markets in the emirate.

‘For us this year a priority will be to accelerate the development of our capital markets,’ says Hamed Ali, chief executive of the Dubai Financial Market (DFM). ‘Ten of our crown jewel government-owned assets will be listed on the exchange.

‘Four have been announced for this year, the first being DEWA, one of the most successful businesses in Dubai.

‘Should you look at it as a privatisation programme, or as a way of driving the growth of capital markets? We look at it in the second light.

‘We do have a culture of private investing in shares. The culture of the stock market among individuals is strong. People are financially savvy.’

Another company tipped for an IPO is Emirates, the flagship Dubai-based airline. Its president, Sir Tim Clark, suggested late last year a listing could be on the cards.

The DEWA offer has set the privatisations off to a strong start. Russ Mould of stockbroker AJ Bell said: ‘I guess you would like to think that if Dubai has a major IPO programme coming up then the early deals will be enticingly priced to ensure they go well and generate demand for follow-up transactions.’

The float is likely to be followed up by Salik, a road toll operator. Others in the pipeline include Tecom, which runs business parks, and the cooling systems firm Empower.

DEWA’s listing is seen as being part of Dubai’s moves towards green energy, which in turn lie at the heart of its economic growth strategy. The Dubai market, says Hamed Ali, has ‘done relatively really well in the pandemic’.

The DFM General Index increased 28.2 per cent in 2021, higher than most of the major global indices around the world.

‘We expect this year to be one of the best,’ he adds.

‘The size and the details [of the upcoming floats] will be announced by the issuers but we are ready to host any number of IPOs.

‘Whenever we have a listing we ring the bell. For some reason, people love the bell.’

The Dubai Financial Market is a young market, only 22 years old, compared with three centuries of history on the London Stock Exchange. 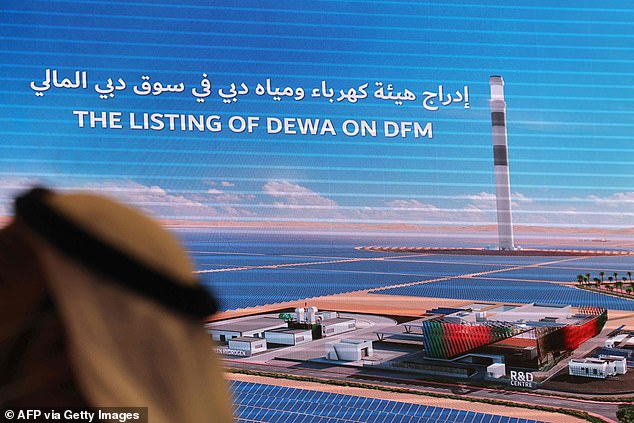 Privatisations: The DEWA float is likely to be followed up by Salik, a road toll operator. Others in the pipeline include Tecom, which runs business parks, and the cooling systems firm Empower

In 2010 it teamed up with the local branch of the US tech market, Nasdaq Dubai.

The two are distinct: the DFM is regulated by the UAE Securities and Commodities Authority while Nasdaq Dubai is under the international regulation of the Dubai Financial Services Authority.

The string of floats is an attempt by the emirate to rival its neighbours, Abu Dhabi and Saudi Arabia.

Saudi Aramco, the previously state-owned oil producer, was the world’s biggest IPO in December 2019. Feverish competition broke out between New York, Tokyo and London for the secondary listing, though in the event, the shares were only traded on the Saudi Tadawul.

There have been some big de-listings from the Dubai markets, including DP World, the giant ports operator whose subsidiary P&O Ferries caused a huge row by summarily sacking 800 British-based seafarers last month.

DP World announced it was delisting from Nasdaq Dubai in 2020 and returned to private ownership, citing the short-termism on public markets.

The forthcoming spate of IPOs is aimed at putting the fizz back into markets. Dubai has big ambitions to become a financial, as well as a logistics and travel hub.

The Dubai International Financial Centre district, which consists of 110 acres in the centre of the city crammed with offices, hotels, apartments and restaurants, is one of the emirate’s independent ‘free zones’.

It plays host to 27,000 professionals from around the world, along with more than 2,900 companies. Rather like the City of London, it has its own distinctive identity.

Hamed Ali says: ‘The free-zone model has been extremely successful for us.

‘We have a logistics free zone, a tech free zone and so on. This has been a template that allowed a lot of businesses to come and establish in Dubai.’

In the centre, companies can be 100 per cent foreign-owned – normally they need a local partner.

It has its own independent regulator, the Dubai Financial Services Authority, and instead of the United Arab Emirates legal system, it is governed on the principles of English common law.

Other attractions include tax-free corporate income and profits, guaranteed for 50 years. A new corporate tax is to be introduced on business profits for the first time from June 2023, but it will be at 9 per cent, below most other countries including the UK.

He says: ‘Dubai is known for real estate so we see REITs as one of the segments that will take off. And we have a number of beautiful tech businesses developing out of Dubai.’

Does he envisage one day taking on Wall Street or the City?

The reply is tactful: ‘It works way better for the global economy if we end up working with London. What we are about here in Dubai is building bridges.’