The £1.2billion POWER GRAB: How foreign-owned energy firms siphoned vast dividends… as customers were veering towards huge hike in bills

Foreign-owned energy giants facing the prospect of a windfall tax from Chancellor Rishi Sunak have siphoned £1.25billion from their UK operations over the past two years, The Mail on Sunday can reveal. The payments from Spanish-owned Scottish Power and German giant RWE were made through the pandemic and as British households confronted rising energy bills.

Revelations of the bonanza, paid in dividends to overseas parent companies, come just days after Sunak unveiled an emergency £15billion support package for families struggling to cope with an unprecedented cost-of-living exacerbated by soaring energy prices.

Sunak said the package would be part funded by a £5billion windfall tax on North Sea oil producers such as Shell and BP – part of what he described as a ‘significant set of interventions’ to help offset the impact of rocketing inflation. He said the oil and gas sector was making ‘extraordinary profits’ as a result of ‘surging global commodity prices driven in part by Russia’s war’ in Ukraine. Demand also spiked as manufacturers and other companies ramped up activity sharply as global lockdown measures eased. 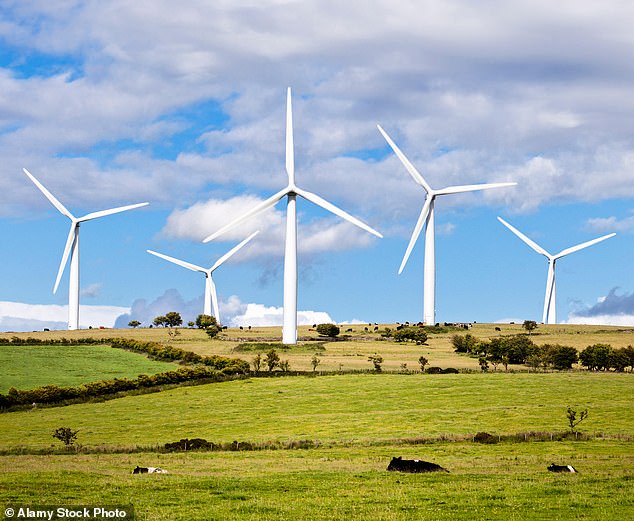 Wheels of industry: The bulk of the bumper dividend payments overseas was made by Scottish Power to its Spanish owner Iberdrola

But Sunak also signalled energy generators were in the firing line and he was ‘urgently evaluating’ the scale of their excess profits.

The Mail on Sunday can reveal that the bulk of the bumper dividend payments overseas was made by Scottish Power to its Spanish owner Iberdrola. It has netted a total of £2.2billion from Scottish Power since 2016. This includes a peak payout of £860million in 2020 and £56million last year.

The highest paid director at Scottish Power received £1.35million in 2021, up £200,000 on the previous year. Analysis of accounts also found that RWE’s UK power generation arm paid a total of £330million in dividends to its German parent in the last two years. Energy campaigners reacted with fury to the revelations. Simon Francis, coordinator of the End Fuel Poverty Coalition, said: ‘The Mail on Sunday’s investigation has uncovered truly jaw-dropping findings. Even after the windfall tax introduced this week, we were told there is not enough money to fully compensate households for the recent astronomical energy bill price rises.

‘All the while, energy firms have been laughing all the way to the bank, handing over billions in dividends. Rather than focus on profitability, while millions of their customers are in abject fuel poverty, these firms need to have a sharp lesson in what meaningful social responsibility looks like and how they can help customers in their time of need.’

The Mail on Sunday analysis specifically focused on foreign-owned firms in the period through the pandemic and subsequent energy price rises.

But for years, energy firms have been paying out vast sums to shareholders. SSE, the London-listed power company, last week announced an annual dividend of £862million. That took the total paid to shareholders since 2018 to more than £4.5billion.

Its shares fell on fears it too could be hit with a windfall tax.

Shares in British Gas-owner Centrica were also weak – it has not paid a dividend since 2019.

Among other foreign-owned energy giants, EDF Energy said no payout has been made from the UK to its French parent company since 2017. But analysis shows the Paris-based group paid £1.8billion in dividends last year, almost half of the group’s total net profits. E.ON also said its UK division had not paid a dividend to its German owner in recent years. The parent group, based in Essen, plans to increase its £1billion payout by up to 5 per cent a year to 2026 as part what it calls an ‘attractive’ dividend policy. Energy suppliers have been vocal in urging the Government to do more to tackle rising fuel poverty after energy prices ballooned in the wake of Russia’s invasion of Ukraine.

Scottish Power chief executive Keith Anderson warned last week that another expected rise in household energy bills in October to between £2,500 and £3,000 a year could see many customers unable to pay their bills. He also urged regulator Ofgem not to set the new price cap too low as it could risk suppliers collapsing or foreign-owned firms leaving the market.

Analysts said a levy on electricity generators would hit several large foreign-owned companies, including Scottish Power, EDF Energy and RWE who have benefited from higher gas prices. These have a knock-on effect in the electricity market, leading to higher wholesale prices across the sector, including some producers of renewable and nuclear power.

A spokesperson for RWE said: ‘RWE is headquartered and listed in German and it is normal practice for UK businesses to pay any profits after taxation to the company shareholder. We’ve invested billions of pounds in the UK’s energy infrastructure and we have ambitious plans to invest up to £15billion more by 2030.’

Going away this summer? Make sure to avoid carbon monoxide poisoning

Does Samsung's energy-saving SmartThings app really save you money on bills?