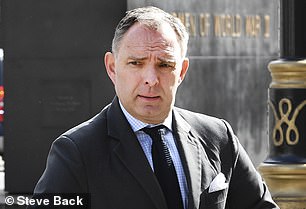 Well informed: Lord Sedwill will become a non-executive director at BAE in November

A former head of the Civil Service is joining BAE’s board.

Lord Sedwill, who worked for prime ministers Theresa May and Boris Johnson, will become a non-executive director of the UK’s largest defence business in November. The job typically comes with an £85,000 a year fee.

In his final decade in public service, he was British ambassador and Nato representative in Afghanistan, Foreign Office political director and Home Office permanent secretary.

That period culminated in him serving as national security adviser from 2017 to 2020 and Cabinet Secretary from 2018 to 2020.

His appointment comes as heightened tensions around the globe triggered by war in Ukraine have led to an increase in government spending on defence.

Chairman Sir Roger Carr said: ‘He is globally respected. He will bring well-informed geopolitical and economic perspectives to the board.’

Who will star in the Death in Paradise spin-off?

Driver fined £100 for charging car at service station: ‘Others should be warned’

Hotels and restaurants could become pricier in July