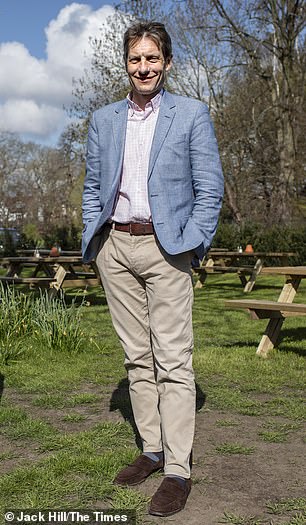 Under fire: Andy Hornby faces a backlash from the restaurant chain’s shareholders

Andy Hornby, chief executive of The Restaurant Group, has been blasted for taking a bonus while the Wagamama and Frankie & Benny’s owner received tens of millions in taxpayer support.

Hornby, who led Halifax Bank of Scotland before it was rescued by taxpayers during the financial crisis, collected a £578,000 bonus, taking his total pay to £1.2million.

The payout comes despite the significant state aid handed to his firm last year to support it through the third Covid lockdown. The restrictions forced its 400 sites, which also include the Chiquito brand, to shut.

Campaigners say that the ‘inappropriate rewards’ fail to take into account those who paid for vital financial life support, including the restaurants’ customers.

In its annual report, TRG said it had received £43.2million through the Government-funded furlough scheme last year. That was on top of £123.5million in 2020.

It also benefited from a £50million loan through the Coronavirus Large Business Interruption Loan Scheme, repaid in 2021, and millions in business rates relief.

Hornby’s payout puts him on a collision course with shareholders who have said that companies which drew on public support during the pandemic should not pay large bonuses to executives.

Asked about Hornby’s pay, top 20 shareholder Legal & General Investment Management said it had a ‘very clear policy’ on opposing bonuses in these circumstances. The asset manager said: ‘If companies have faced liquidity issues due to Covid-19 to an extent they had to suspend dividends, accept Government support in the form of loans, suspension of rates or furlough and they reduced headcount, then company bonuses to executives should not have been paid.’

Hornby ran HBOS from 2006 to 2008, when it had to be rescued by Lloyds Banking Group in the financial crisis. Lloyds was bailed out by the taxpayer the following month.

TRG had suffered even before the pandemic amid intense competition in the casual dining sector. It was forced to close 125 sites in 2020 affecting 3,000 jobs. It tapped shareholders for £232million to weather the Covid storm and says it furloughed ’95 per cent’ of its employees for ‘significant periods’ of 2020 and 2021.

The chair of TRG’s pay committee, Zoe Morgan, said it had ‘debated at length the appropriate bonus award for strong performance once trading resumed in 2021’ and was ‘cognisant of the significant Government support received’. But Morgan said the fact no bonuses had been paid for the previous two years had fed into the decision to agree a reduced payout.

She said Hornby’s £963,333 bonus was cut by 40 per cent. TRG finance chief Kirk Davis also saw his payout trimmed, to £271,000. But campaigners said paying a bonus at all was not acceptable given the significant state support. Andrew Speke, of the High Pay Centre, said: ‘Investors are right to call this out for what it is – a company taking public money with one hand, and handing out generous bonuses to executives with the other. If the remuneration committee respect their customers, British taxpayers, they should take heed of their investors’ disquiet and reverse their decision to pay these inappropriate rewards.’

The issue is likely to ignite TRG’s annual shareholder meeting next month. A significant proportion of investors voted against Hornby’s pay package at its last two investor votes. 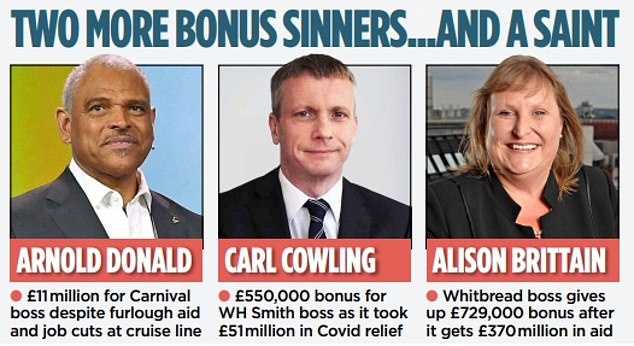 His 2021 payout is the first bonus paid by TRG to a chief executive since the one paid to Hornby’s predecessor Andy McCue in 2017. TRG said directors also waived a portion of their salary in the first year of the pandemic. Listed companies face a stormy summer of investor rebellions over corporate pay.

This month it emerged Alison Brittain, boss of Premier Inn owner Whitbread, agreed to give up her £729,000 bonus after the MoS revealed concerns over the delayed award. Whitbread drew on £370million of pandemic support. Carnival saw 36 per cent of its investors vote against boss Arnold Donald’s £11.4million pay. That was paid despite the cruise giant using the furlough scheme, not paying dividends and axing jobs.

WH Smith saw 46 per cent of its investors vote against boss Carl Cowling’s £550,000 bonus. The board said his bonus had already been cut by 22 per cent which was ‘proportionate compared with pandemic support’. But the retailer took £40million in business rates relief and £11million in payments through the furlough scheme in the year to September 2021.

Ladbrokes owner Entain also risks a backlash. Betting shops closed in lockdown, but its revenues were boosted as bored Britons switched to online gambling. Entain repaid £44million of furlough for 2021, but kept £57.5million claimed in 2020, as new boss Jette Nygaard-Andersen landed a £2.5million package, including a £1.8million bonus.