A Haitian man who was among the nearly 15,000 migrants who were turned away from requesting asylum at the southern United States border will now do so in Mexico, forgoing the American Dream for a country where he said he’s confident he can attain the same personal goals.

‘My dream is not the United States, my dream is coming here and to work, to find employment,’ Gilbert Betoux told Univision as he and dozens of Haitian nationals milled around Mexico’s Commission for Refugee Assistance in Mexico City, almost 870 miles away from the squalid makeshift camp that was disbanded Friday under the Ciudad Acuña-Del Rio International Bridge in Del Rio, Texas.

‘What I can achieve in the United States I can still achieve here,’ he added matter of factly.

By Friday, no migrants remained at the Texas border city encampment where the asylum seekers – most of them from Haiti – had gathered since last weekend. 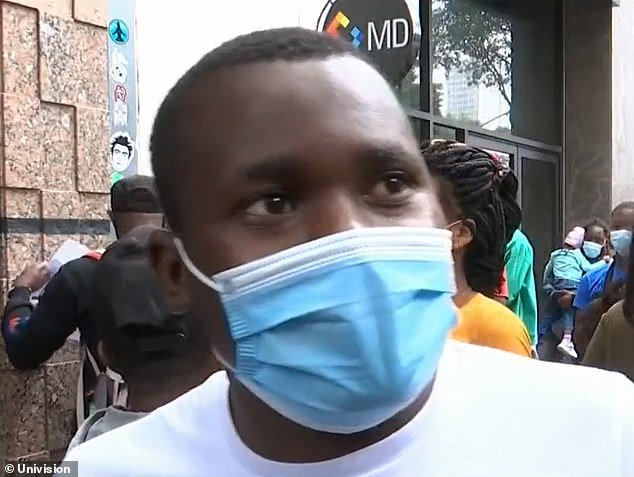 Haitian national Gilbert Betoux was among the nearly 15,000 migrants – most from Haiti – who converged at a makeshift camp under the Ciudad Acuña-Del Rio International Bridge in Del Rio, Texas, to seek asylum from the U.S. government. But he gave up his shot at the American dream, telling Univision on Thursday: ‘My dream is not the United States, my dream is coming here and to work, to find employment. ‘What I can achieve in the United States I can still achieve here’ 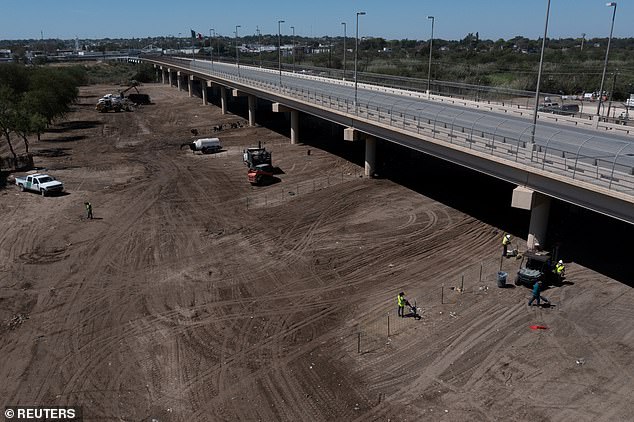 Workers clear debris from the site of a makeshift border migrant camp along the Ciudad Acuña-Del Rio International Bridge in Del Rio, Texas, where all of the nearly 15,000 migrants -most of them Haitian foreign nationals – who had gathered since last Saturday had been cleared out 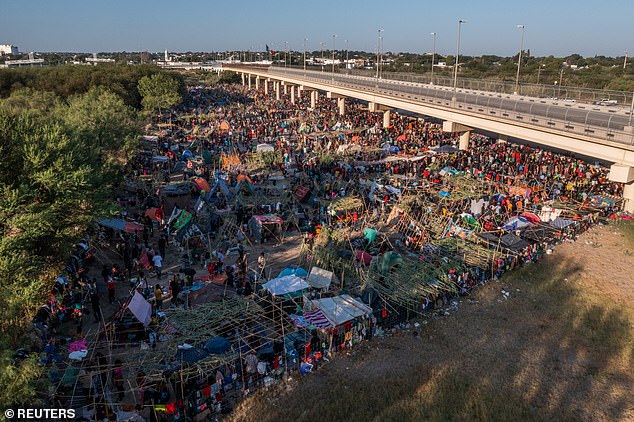 Migrants await to be processed along the Del Rio, Texas side of the Ciudad Acuña-Del Rio International Bridge after crossing the Rio Grande river into the U.S. from Ciudad Acuña, Mexico last Sunday

Almost 2,000 people have been placed on flights and returned to Haiti, the Department of Homeland Security said Thursday.

There are about 3,900 Haitians still being processed and awaiting to find out if they will be sent back to the Caribbean nation or if they will be placed in United States immigration court proceedings.

Others were released in the U.S. with notices to appear in court or to report to immigration authorities.

Patrick Jean was among several thousand who saw their dreams of reaching the U.S. dashed and then managed to cross back to Mexico, where he eventually joined Betoux and the rest of their fellow countrymen in the nation’s capital to apply for asylum.

‘I crossed to the bridge, but the way they had them there, it was unimaginable to see those things,’ Jean told the network. ‘That treatment is not for me. I did not like it, it was like if the human right does not exist there.’ 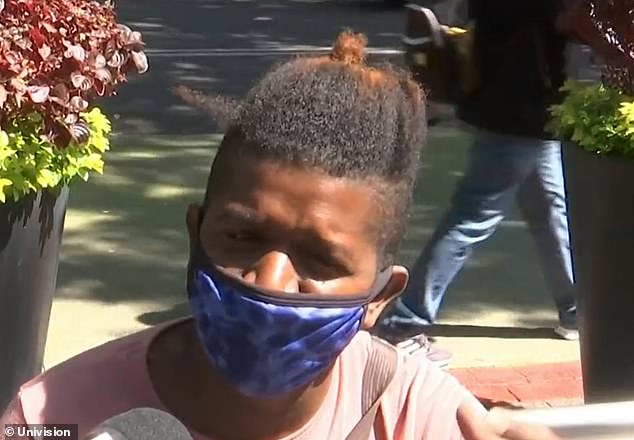 Patrick Jean, of Haiti, told Univision on Thursday that he decided to return to Mexico because of the inhumane conditions on the Del Rio, Texas side of the Ciudad Acuña-Del Rio International Bridge. Jean was among dozens of Haitian migrants who were in Mexico City applying for asylum 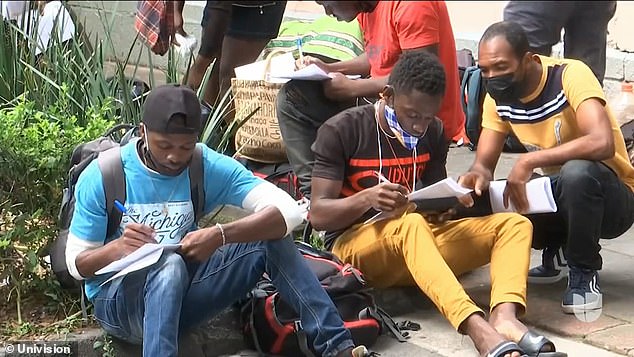 Haitian migrants apply for asylum at Mexico’s Commission for Refugee Assistance in Mexico City on Thursday. 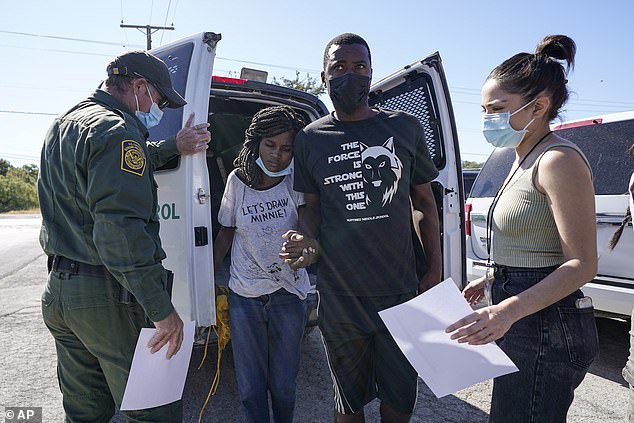 A U.S. Customs and Border Protection agent (left) drops off a migrant couple and introduces them to a worker with a humanitarian group after they were released from custody Friday in Del Rio, Texas

While Mexico has been open to finding a remedy to the migrant crisis, it’s not a given that Betoux, Jean and thousands of other Haitians will have their asylum petitions approved.

Mexican official data show Haitians are already far less likely to have asylum claims approved in Mexico compared with many nationalities, even if their chances are starting to improve.

Last year, of all asylum claims that were formally resolved, only 22 percent of Haitian cases won approval, compared with 98 percent for Venezuelans, 85 percent of Hondurans, 83 percent of Salvadorans and 44 percent of Cubans.

So far this year, the Haitian number is up to 31 percent. 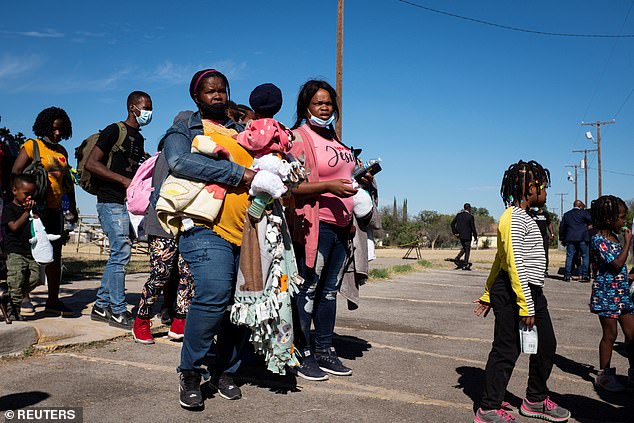 Migrants seeking asylum in the U.S. wait in line to board a bus to Houston from Val Verde Border Humanitarian Coalition after being released by U.S. Customs and Border Protection in Del Rio, Texas on Friday 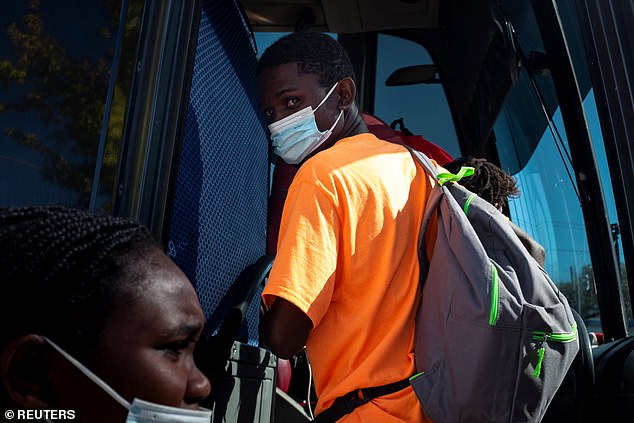 Migrants seeking asylum in the U.S. board a bus to Houston after being released from U.S. Customs and Border Protection in Del Rio, Texas, on Friday 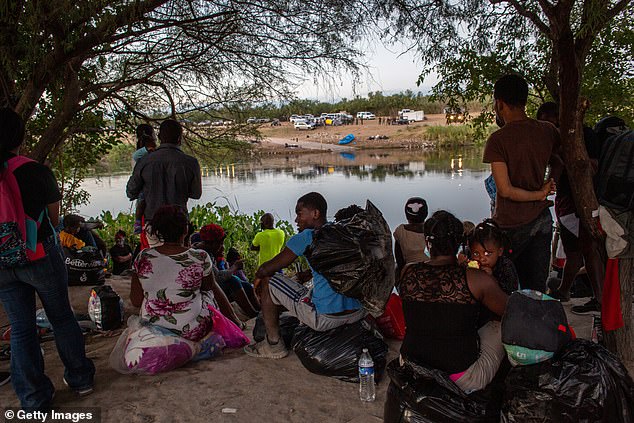 Asylum requests have overwhelmed the Commission for Refugee Assistance, which is scheduling appointments months away, if at all. Some Haitians in Ciudad Acuña said they had left the southern city of Tapachula – which borders with Guatemala – because they were so fed up with waiting.

Their decision to march towards the US-Mexico border sparked a series of confrontation over a five-day stretch in the southern state of Chiapas, highlighted the savage beating inflicted on a Haitian man by Mexican immigration agents as his son watched.

‘It basically pushes Haitians out,’ said Caitlyn Yates, a migration expert at the University of British Columbia.

Soggy papers discarded in the grass near the Rio Grande showed that a Haitian man who applied for a humanitarian visa in August would have had to wait until December for an appointment. 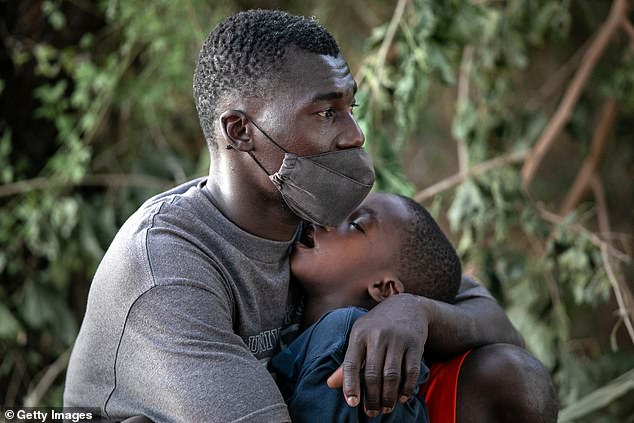 A father holds his exhausted son while waiting to cross the Rio Grande into Del Rio, Texas, on Thursday 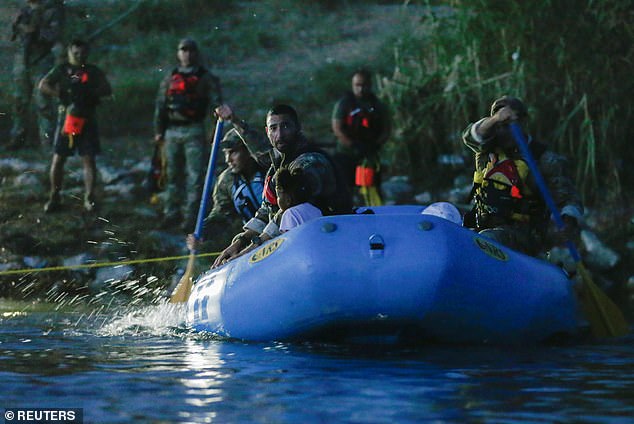 Border Patrol Agents with an inflatable boat help migrants seeking refuge to cross into the U.S., near the banks of the Rio Grande in Del Rio, Texas, on Thursday

Start-up develops a $92,000 flying vehicle dubbed Jetson One that 'anyone can own and fly'