I can see some sort of financial crisis in Europe as interest rates rise, says HAMISH MCRAE

What happens next? It was an extraordinary week and, for Britain, a miserable one. So, first, let’s take stock.

The reaction on the gilt market and foreign exchanges undid any hopes we might have had that the growth package could work. Any fiscal boost will be offset by higher interest rates.

The damage from our Prime Minister and Chancellor failing to grasp that they had to get the markets onside – and that meant getting an endorsement from the Office for Budget Responsibility – can’t be undone. Going to the OBR now helps at the margin, but its assessment, to be delivered to the Treasury next Friday, will duly be leaked and will not be pretty. 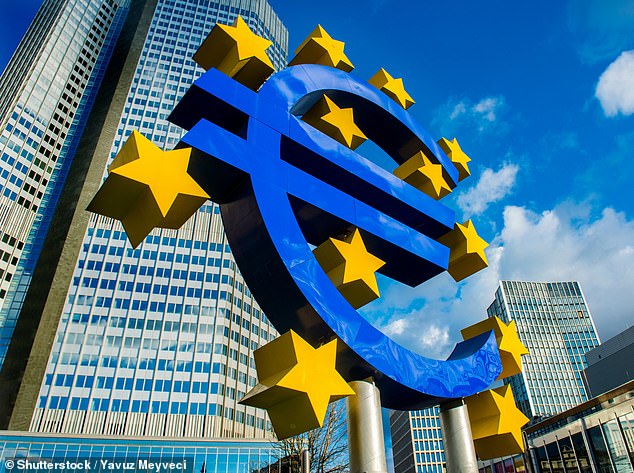 Rise: The European Central Bank has signalled a sharp increase in rates next month, with further hikes to come

Our own mess, however, was not the only thing that went haywire.

There was a collapse of confidence in US markets. The most important share index, the S&P500, dipped below its previous bottom in June and the Nasdaq index of high-tech shares was close to its floor too. They are down 24 per cent and 32 per cent respectively so far this year.

The yield on US ten-year Treasury debt, having touched 4 per cent, is still at 3.7 per cent, which compares with 10-year gilts at 4.1 per cent. Ironically, it was the Bank of England’s intervention on the gilt market that pulled US yields down, for it showed that central banks can act decisively when they have to.

But US financial confidence remains very fragile. We look at the strong dollar and worry about the weak pound; Americans see distress sellers of equities and a housing market that is tanking.

Yet the European Central Bank has to set interest rates for a different set of countries in very different circumstances. It has signalled a sharp increase in rates next month, with further hikes to come.

So what’s to look for? Let’s start with the UK. Here the question is whether this Government can get to its scheduled Budget on November 23 without some sort of market (or political) event intervening.

There was disappointment on Friday that the official OBR forecast had not been brought forward, and I would give the Government not much better than evens on getting there without some sort of radical shift.

Meanwhile, interest rates will continue to climb and that will take its toll on the mortgage market. The present shock will subside and, quite soon, loans will become available again. But they will be more expensive. Some people won’t be able to keep up payments and others won’t bid for houses at all.

However I don’t think that, even if prices do fall, the downturn will be as serious as the last one in 2008/9, when they declined on average by 15 per cent.

With luck, we will get stable prices and a gradual improvement in affordability as incomes rise. Does that mean a recession next year? We seem to be squeaking by this year without one, but what happens in 2023 will be determined more by international factors than by what we do or don’t do.

The equity strategists are crawling over the data on previous bear markets and the consensus seems to be emerging that this one has some way to go before it hits bottom.

I can see too some sort of financial crisis in Europe as interest rates rise. Maybe there will be a rerun of the Eurozone crisis of 2010/11. But, this time, the trigger being inflation rather than country indebtedness.

And the turning point, when clouds lift, rates and inflation come back down?

What usually happens is there is some kind of seismic event, such as the collapse of Lehman Brothers, that forces central banks and governments to work together to steady things.

We are not there at the moment, so this bumpy ride goes on a while yet.