HAMISH MCRAE: What’s to be done about the Bank of England? We need fewer clever academics and more people with proven financial judgment 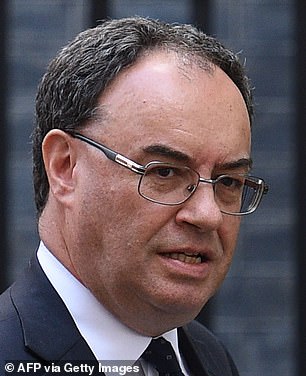 What’s to be done about the Bank of England? There will be huge political pressure to change the way in which monetary policy is run, but there is a real danger that the new PM and Cabinet may make matters worse, not better.

There has been a monumental failure at the Bank not simply to control inflation now, but to grasp a year and more ago how serious the threat might become.

This is a collective failure of central bankers. The Bank seems to think that the inflation outlook here is worse than that of the US or Europe and that may be right.

What is different is that the Bank of England is in full panic mode, whereas both the Federal Reserve and the European Central Bank are still more positive. The Fed chair Jerome Powell said last week that it was not trying to cause a recession by raising interest rates and did not think it needed to. The ECB’s central scenario is that there will be no recession this year or next.

By contrast, the Bank of England thinks that the economy will shrink both next year and the year after. That is much worse than the financial markets expect. The consensus views of City economists done by Bloomberg reckon growth in 2023 will be 0.6 per cent and 1.5 per cent in 2024. I would side with the markets on this.

As for inflation, well, maybe the Bank will turn out to be right in warning of a peak of 13 per cent at the end of this year, but that also feels overly pessimistic. Much depends on wholesale gas prices, which may go through the roof if Russia shuts off supplies completely. But energy prices as a whole are coming down. The Brent oil price was $93 a barrel on Friday.

That is way down from its peak of $122 in March and actually a tiny bit lower than it was on February 23, the day before Russia invaded Ukraine. Sterling is down against the dollar, which is why pump petrol and diesel prices have not fallen much. But that is really a strong dollar story. At €1.18 the pound is towards the top of its five-year trading range against the euro.

In short, I think the Bank is overcompensating for its previous complacency by being overly gloomy now. But this new-found caution will not stop the calls for reform. What should they be?

Let’s get rid of the idea that the Bank should be under more direct political control. That would be nuts. Not only are politicians likely to be even worse than central bankers at setting interest rates, but no wise one would want to take the blame when things go wrong. However central bankers must ultimately be answerable to society as part of the democratic process. So the challenge is to take what we have and try to make it work better. I can see two ways of doing so.

One is to look at the mandate of the Monetary Policy Committee. At the moment it is to keep inflation around a central point of 2 per cent, balancing that with maintaining employment and growth. It is sensible to keep that. It is simple and straightforward.

But I suggest adding something: the need to maintain financial stability. So if there is some disruptive force, such as a surge in house prices or indeed a collapse of them, the Bank would be required to take that into account. A year ago that light would have been flashing red. This is not original. It is classic central banking.

Back in 2005 Paul Volcker, the legendary chair of the Federal Reserve who crushed the 1970s burst of inflation by jacking up rates to 20 per cent, was staying with us in Oxford – he was giving a lecture and my wife was head of a college. I asked him about inflation targets. He dismissed them as potentially misleading.

What was needed above everything else was stability. That was three years ahead of the banking crash, when he was recalled by President Obama to help him shape the response to the crisis.

The other idea is to look at the composition of the MPC to avoid groupthink. This is not to criticise them individually, though the socalled doves who pushed against rate increases must feel silly now.

What we need is fewer clever academics and more people with proven financial judgment. Put another way, less reliance on economic models and more on common sense. We sure need more of the latter in these troubled times.