Can we REALLY bank on Bailey? The heat is on for BoE governor as inflation cuts loose and the stakes for UK plc get higher

By Alex Brummer for the Daily Mail and Dmcontent

As governor of the Bank of England, Andrew Bailey hasn’t had the best of times.

On the weekend he moved into Threadneedle Street in March 2020, the world’s financial markets were near to collapse as pandemic lockdowns spread across the planet.

This year he has faced a ‘crisis upon crisis’ as Russia’s war on Ukraine unleashed a global energy price shock. 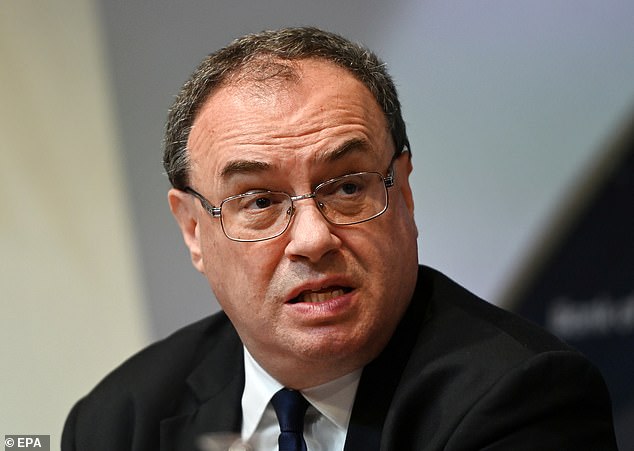 Under pressure: Last week Bank of England governor Andrew Bailey admitted that by the end of this year inflation will be more than five times that at 10.25 per cent

Even so, as the person directly responsible for leading the struggle against inflation in the UK, he has not covered himself in glory.

The Bank is charged by the Government to keep consumer price inflation at 2 per cent. Last week Bailey admitted that by the end of this year inflation will be more than five times that at 10.25 per cent. That is an indictment of his stewardship.

If Bailey – who picked up pay cheque of £575,538 last year, including pension – was operating in the private sector, his job would be at risk for such a calamitous performance. Instead, he still has a further six-year lease on his eight-year term of office.

It would be a brave Prime Minister who dared to dismiss him amid advice that to do so would be disaster for financial markets.

The pound is already plunging on currency markets – and dipped below $1.23 yesterday. So how much worse could it get?

No one disputes that Bailey, equipped with a first-class Cambridge degree and a PhD in economic history, has a fine mind and played a crucial role in steering Britain’s broken banking system through the 2007-09 great financial crisis.

Nevertheless, he has been lampooned by his predecessor, the matinee idol central banker Mark Carney, as the ‘sexy turtle’.

The Canadian was mocking the sluggish pace of post-financial-crisis reforms to the High Street banks when Bailey was in charge.

Many City watchers felt he had disqualified himself to become governor as a result of his performance in his previous job as boss of the regulator the Financial Conduct Authority.

Bailey was chief executive at the time of the costly collapse of London Capital & Finance and the closure of failed fund manager Neil Woodford’s investment empire.

Bailey’s leadership of the Bank has been badly misjudged in terms of its forecasting.

In May 2021, the former chief economist of the Bank, Andy Haldane, warned in a Daily Mail article that ‘the inflation genie is getting out of the bottle’.

In an interview with the Sunday Telegraph this weekend, Haldane said: ‘Regrettably I was right about the inflation impetus.’

He said ‘resurgent demand’, as the economy bounced back from Covid, ‘bumped up against constrained supply’.

As the economy recovered, energy prices soared and there were shortages of almost everything, from timber to semi-conductors, sending prices sharply higher. These trends were exacerbated by Russia’s merciless invasion of Ukraine.

Rather than listen to Haldane’s advice, Bailey and the other eight members of the interest-rate-setting Monetary Policy Committee left interest rates at 0.1 per cent, the lowest level in the Bank’s 327-year history.

The Bank continued to pour cash into the economy through its £895bn bond buying programme known as quantitative easing. This is tantamount to printing money.

When the City saw a cost-of-living tsunami hitting last autumn, Bailey insisted that rising prices were the result of temporary post-Covid supply problems and ‘transitory’.

As inflation jumped to 5.1 per cent in November 2021 the 63-year-old governor changed his mind and signalled to the markets that the Bank was to start lifting interest rates. He confused everyone by pulling back from the brink at the last moment.

Finally in December, the Bank acknowledged that inflation had become more ‘persistent’ and started to lift rates.

The zig-zag on the cost of living and interest rates is only matched by the Bank’s less than inspiring forecasting record in the Covid era.

When the coronavirus pandemic descended, Bailey and his team warned of a jobs Armageddon with the unemployment rate jumping to 9 per cent of the workforce, leaving untold millions on the dole.

A year ago it forecast 7.75 per cent jobless as furlough came to end. In the event, the unemployment rate peaked at 5.2 per cent of the workforce and now stands at 3.8 per cent.

Twelve months ago Bailey and his team were projecting perky UK growth in 2022 of 4.25 per cent, a figure now trimmed to 3.2 per cent for the first half of this year.

Next year the UK is seen as flat-lining against a previous forecast of a 2.25 per cent expansion made a year ago.

When the Bank of England was granted its independence 25 years ago, the aides to then-Chancellor Gordon Brown opined that they wanted to shield it from politics and for it to become an inflation-fighting machine as respected as the German Bundesbank.

Instead, the Bank’s record has been damaged and the fear is that the UK (along with much of West) could be heading straight back to the high inflation, low growth era of the 1970s.