Shares in The Hut Group bounced after it revealed it has rejected a number of takeover approaches.

Boss Matt Moulding said the struggling online retailer – now known as THG – has received ‘numerous’ offers over the past few weeks following a near 90 per cent fall in its share price since early last year.

But he insisted ‘each and every proposal’ was ‘unacceptable’ and far too low to consider. All were rejected at an early stage. 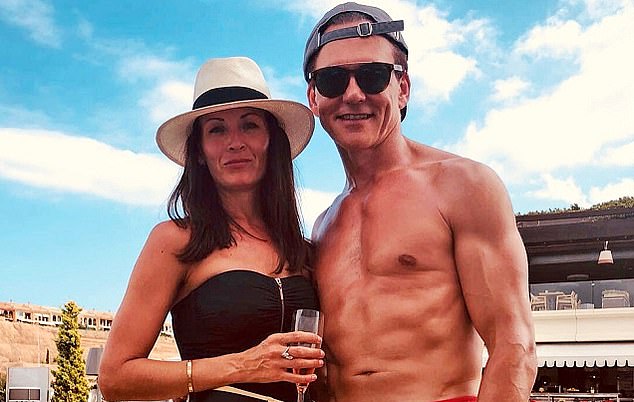 It is understood that private equity groups Advent International and Leonard Green were among the potential suitors. Apollo has also been linked.

Moulding’s admission – which comes after a flurry of speculation that bidders are circling the group – sent shares rocketing 15.9 per cent, or 15.08p, to 110p.

But in a worrying sign for investors, Moulding (pictured with wife Jodie) warned that profits this year would be squeezed by rising costs.

Shares were already languishing but took another major hit last year when the company was rocked by a barrage of concerns about its governance and the performance of its tech arm Ingenuity.

Moulding, 50, has previously said he has considered taking the company private again, saying life on the public market has ‘just sucked from start to finish’.

He disclosed the takeover approaches as the company posted results for its first full year as a listed company.

They were also the first set of figures under chairman Lord Allen, a City veteran who ran ITV from 2004 to 2007, who was appointed in March.

THG – which owns beauty brands including LookFantastic and Glossybox and nutrition drink line MyProtein – saw sales surge by 35 per cent in 2021 to £2.2billion.

And in the first quarter of this year revenue was 16 per cent higher to £520million, beating forecasts and quelling fears that the spiralling cost of living crisis has knocked sales.

Liberum analysts said it was a ‘slow start’ to the year but this was expected, in part because it faced tough comparators with the start of last year when lockdowns kept people stuck at home and shut down non-essential stores.

And the company warned rising costs would weigh on profits. The prices of raw materials and energy, which were already rising as the global economy emerged from the pandemic, have spiked since the war in Ukraine began.

Many businesses have also been hit with supply chain and transport disruption.

The Manchester-based group said profits would be lower than forecast because it is keen not to pass on the higher costs to customers, which in turn will hit its margins.

The results also showed its tech and e-commerce arm Ingenuity saw revenues surge by 42 per cent to £194million.

Moulding has previously talked about wanting to spin off Ingenuity – but it is understood that Allen is keen to re-evaluate the company’s strategy, which could kibosh plans of a spin-out or sale.

There have been concerns in the City over the power wielded by Moulding, who was executive chairman, chief executive and the largest shareholder when the firm floated. He still owns a ‘golden share’, which means he is able to veto any takeover offers.

He will give this up later in the year as part of plans to switch THG’s listing on the London Stock Exchange to a premium listing where it will be able to be included in the FTSE indexes.

What time is Strictly Come Dancing on tonight?