Phoenix Group is forecasting cash generation to reach the high end of annual forecasts, following a jump in demand for pension deals.

The FTSE 100 firm generated a record £950million of cash during the first six months of 2022, a £78million rise on the equivalent time last year.

It achieved this on the back of record new client business of £430million, with the most significant contribution originating from its retirement solutions business, which benefited from six bulk purchase annuity (BPA) contracts. 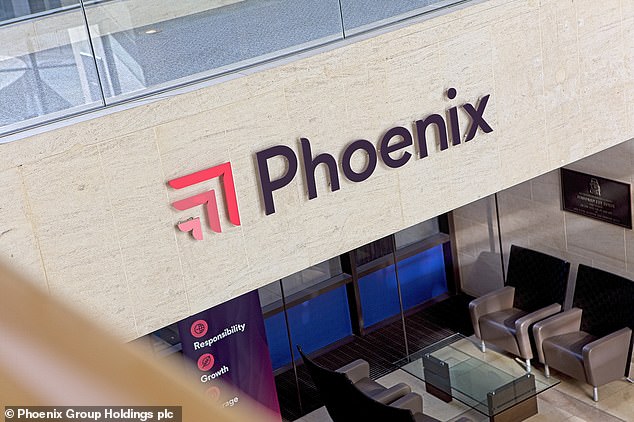 Performance: Phoenix Group revealed it generated a record £950million of cash during the first six months of 2022, a £78million rise on the equivalent time last year

As a result, Phoenix said it was ‘confident’ that cash generation would reach the top end of its £1.3billion to £1.4billion target range this year.

The insurer also told investors on Monday it had enhanced its balance sheet by repaying £450million of debt, thereby boosting its solvency ratio by six percentage points to 186 per cent.

Operating pre-tax profits also remained strong at £507million, though this was a slight decline on the previous year due partly to a drop in earnings within its heritage arm and higher investment in its Open business.

Nonetheless, the high value of BPA premiums agreed during the period helped the latter division achieve net inflows of £1.8billion.

Chief executive Andy Briggs said: ‘Phoenix has performed very strongly in the first half of the year despite the challenging macro environment.

‘We have once again delivered a record set of financial results, which was underpinned by the strong progress we have made across our strategic priorities.’

Last week the company announced that it had agreed to buy Sun Life of Canada’s UK division for £248million, its first ever cash-funded acquisition.

The London-based firm estimates it will generate around £470million of incremental long-term cash generation from the transaction, which it intends to complete in the opening quarter of 2023.

Following the announcement, Briggs told Reuters news agency that the business could potentially spend more than £1billion on similar deals.

Steve Clayton, a fund manager at Hargreaves Lansdown, said: ‘The group have cash surplus and capital, so expect further acquisitions down the line.

‘The business hedges risks to the maximum extent possible and saw little impact when markets tumbled in the first half. Crucially, Phoenix says this morning that they have almost no exposure to inflation, having hedged out their costs and product exposures.

‘No doubt analysts will quiz them later on how long this hedging will run for. But right now, that protection from rising costs puts Phoenix in an enviable position relative to most UK companies.’

Phoenix Group Holdings shares were up 0.15 per cent, or 1p, to 681.8p just before trading closed on Monday, meaning their value remains around the same as it was 12 months ago.