For many investors, a reliable income stream from dividends is the Holy Grail. At present that grail is largely composed of copper, gold, and even vanadium – as much of the dividend growth from the UK stock market is coming from the mining and resources sector.

Mining giants Glencore and BHP both announced record dividends in the past few days.

And while some investors may have issues about their environmental credentials, it should not be forgotten that it is these companies that are supplying some of the materials that are driving the transformation of the global economy towards a more sustainable one. 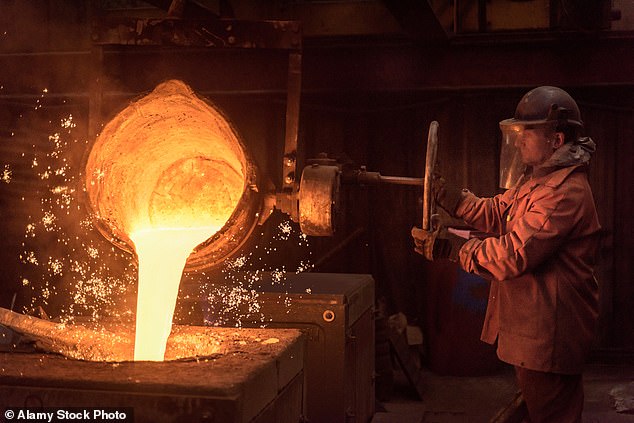 Liquid assets: Much of the dividend growth from the UK stock market is coming from the mining and resources sector

It’s a point made by Rob Crayfourd, a resources fund manager at New City Investment Managers. He says: ‘When people talk about energy transition, they think hydrogen, lithium for batteries, solar and wind. But most of the listed companies involved in this process have share prices that are trading at expensive levels.

‘However, the mining companies that produce the materials being used by these companies have share prices which could be viewed as undervalued – especially given the strong earnings they are generating.’

While investing in mining stocks is not without its risks, they might give your portfolio an income boost.

Unearth stocks with a rich heritage

Unlike some of today’s technology stocks, the mining and resources stocks listed on the London Stock Exchange have a long history. It’s worth understanding where they come from and how they have changed to decide which stocks are for you and the risks of investing in the sector.

The first thing to note is that you probably already have exposure to mining and commodity stocks if you’re an investor in UK funds or an index-tracking investment fund.

The miners included in this index have a rich history. For example, BHP Billiton, which has its roots in the Broken Hill Proprietary company of New South Wales, has grown and diversified into a behemoth with mining interests worldwide.

Meanwhile, Rio Tinto was founded in 1873 by investors who wanted to reopen ancient copper mines near the ‘Red River’ (Rio Tinto in Spanish) near Huelva in southern Spain. Even Glencore, a relative newcomer to the stock market, was set up in a different world from today, by commodity experts wanting to trade zinc.

The miners have transformed their stated purpose over time. Far from the world of gold rush Australia, BHP’s website now states that it provides products to ‘help build a better, clearer future’, while Rio Tinto says ‘we produce materials essential to human progress’. Glencore, meanwhile, promises that it is ‘responsibly sourcing the commodities that advance everyday life’.

Yet legacy issues do plague some mining companies. Glencore announced in the last few days that it has set aside £1billion to deal with bribery and corruption probes, while Rio Tinto released a damning report into its workplace culture, citing systemic bullying, sexual harassment and racism.

So while these companies are transforming themselves into sustainable businesses, there is always the risk that their history – and continued use of fossil fuels in the extraction of metals – will dog their attempts to move forward.

Tap into resources for a sustainable future

Despite these problems, miners have a lot going for them in the current environment.

The price of mining stocks is heavily correlated with that of commodities, which have gone up sharply in recent months.

Miners have also done a good job in recent years in being more disciplined about costs, which has allowed them to pay juicy dividends to their shareholders.

BHP currently pays shareholders an annual income equivalent to 10 per cent of their investment while Anglo American pays five per cent. BHP shares are up 13.5 per cent over the past 12 months, while Anglo’s are up nearly 28 per cent.

Mark Smith, who runs investment fund Amati Specialist Metals, says high metal prices are likely to be sustained in the short term as the metals are required to move towards a more renewable energy future. ‘There’s going to be a role for all these metal miners in this new green decarbonised world,’ he predicts.

IG’s Beauchamp says the best approach that investors can adopt is to buy into the big mining companies which are extracting a variety of commodities.

He adds: ‘It still makes sense to stick with the big, diversified miners with their broad range of activities and geographic exposure, providing a measure of protection from any downturn in individual commodity demand.’

BestInvest’s Hollands believes Anglo American represents one of the better investment opportunities. He says: ‘Its interests span iron ore, copper, platinum and diamonds. By 2024 around 50 per cent of its earnings will come from copper, a metal that is a key component in electric vehicle batteries, as well as the wiring for semi-conductors.’

He adds: ‘Although the future is uncertain, what is certain is that there will be more electric cars on the roads and semi-conductors will be used in all facets of our lives – from health care through to artificial intelligence.’

If you’d rather not buy individual stocks, there are numerous investment funds that will give exposure to rising metal prices.

Hollands says a more diversified approach is to buy a fund such as RWC UK Equity Income which has 10 per cent of its portfolio invested in basic materials stocks. Its largest position is a 5.9 per cent investment in Anglo American, but it also holds gold miners Newmont and Barrick Gold.

Be prepared for a bumpy ride

However you choose to invest in mining stocks, it is important to be aware that it is not likely to be a steady, uneventful ride.

‘Mining stocks are notoriously volatile,’ Hollands warns. ‘Because the cost of extracting metals is high, when commodity prices change even slightly it can have a major impact on profits.’

‘Only buy them as part of a wider investment portfolio.’

Brexit POLL: Should a second referendum be made illegal?