Cook, 68, was instrumental in pushing the £530million sale to Bain Capital, which would have stripped the 179-year-old insurer of its mutual status.

The deal was rejected in December by LV’s 1.2million members after a Daily Mail campaign. Cook promised to step down but has remained until now, collecting £45,000 in pay in the process. 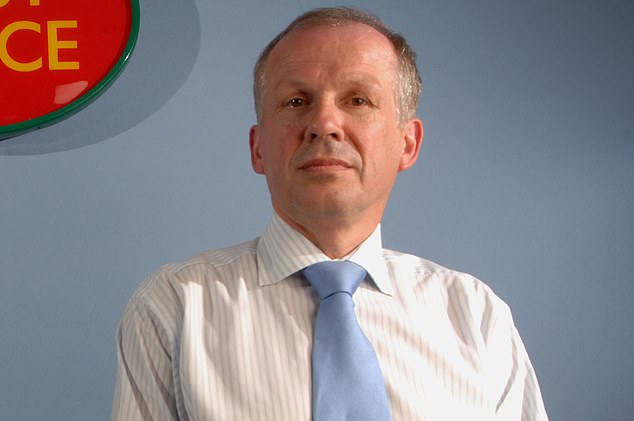 Exit: LV chairman Alan Cook was instrumental in pushing the £530m sale to Bain Capital, which would have stripped the 179-year-old insurer of its mutual status

The deal also cast a spotlight on his past, including his tenure as the Post Office’s managing director when it began prosecuting sub-postmasters wrongly accused of theft.

Critics welcomed Cook’s exit, but said chief executive Mark Hartigan, the other key driver of the deal, must leave LV too.

They also said acting chairman Seamus Creedon, who would have continued to be employed under Bain, has ‘questions to answer’. LV has appointed two non-executives to its board.

Natalie Ceeney, CBE, is the ex-chief executive of the Financial Ombudsman Service, which handles disputes between customers and financial firms.

In a change in direction for the board, which unanimously backed Bain takeover, Creedon said his first task was to appoint directors ‘who will continue to develop LV as a growing mutual insurer’.

Tory MP Kevin Hollinrake, a Treasury select committee member, said of Cook: ‘How he was able to cling on for so long earning huge wages is beyond me.

‘It seems this sorry saga is slowly coming to an end and LV’s future as a mutual is becoming more secure.’

He added: ‘Frankly, Mr Creedon has many questions to answer about his own role in the Bain debacle.

‘Top of the list is why on earth he thinks he can be trusted in charge when he would have benefited from the demutualisation and tie-up with Bain too.

‘Only a change of board and a new chief executive can set LV free of its recent past.’

Its annual report this month will show whether Hartigan will be paid a £740,000 bonus.