MAGGIE PAGANO: Federal Reserve boss Jay Powell must walk a fine line in the fight against inflation and recession

By Maggie Pagano For Daily Mail

It’s been called the Davos of banking. Instead of skiing though, the main after-hours activities for the 120 or so central bankers and economists who attend the Jackson Hole symposium are hiking or fly-fishing.

Finding a location which offered the finest fishing in the US is how the Federal Reserve Bank of Kansas City, which has been hosting the event since 1978, managed to catch Paul Volcker when he was US Federal Reserve chairman.

Once he was told the conference was fish for the famous Yellowstone cutthroat trout, he happily accepted the Kansas invite to attend. 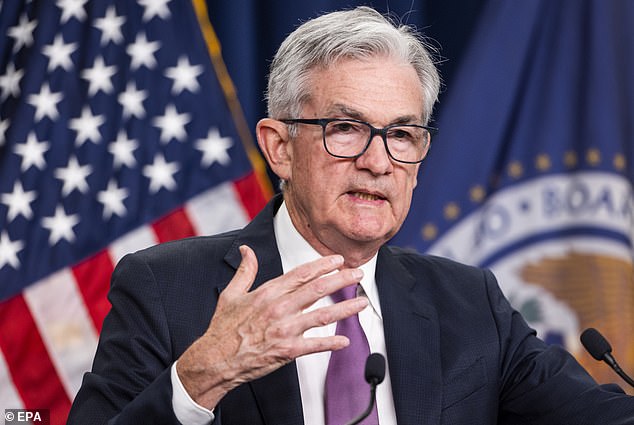 Balancing act: Federal Reserve chairman Jay Powell has been the most aggressive in raising rates having put them up by 225 basis points since March

The rest is history and for the last 40 years Jackson Hole has become the place for bankers to fish, to be seen and, more importantly, to be heard.

This year – the first physical meeting since the pandemic – central bankers from around the world meet in a state of high anxiety over inflation.

How times have changed: Only last year bankers were describing rising inflation as ‘transitory’, praying higher prices were mainly because of shortages and delays due to supply chain hiccups.

Inflation may well have proved transitory if Russia’s invasion of Ukraine had not knocked the world sideways, pushing up the price of energy and food to their highest levels for decades.

And the full impact of China’s tough lockdowns, coupled with devastating floods and water shortages, on its manufacturing sector had not been fully appreciated.

Inflation may not be permanent but it is untamed. How to dampen it down – and how robust fellow bankers should be in hiking interest rates – is top of the agenda.

They will be looking for a lead from Jay Powell, the Fed’s chairman who has been the most aggressive in raising rates, having put them up by 225 basis points since March this year. And they were aggressive hikes: A three-quarters of a percentage-point rise in June and another in July.

But Powell, who gives his speech tomorrow, will have to walk a fine line as investors and analysts will be reading not just every word he says with a magnifying glass but will be looking for what he doesn’t say.

Some analysts are calling on Powell to be bold with his guidance on how high US borrowing costs may go and how long they will need to stay there to bring down inflation.

But that may be hasty: The recent rate increases have yet to work themselves through into the wider economy. Plus there are also signs that inflation is coming down as the price of oil and other commodities, including food, are reducing, albeit slowly.

So Powell will have to be careful not to be too aggressive talking about future rate rises, which could become self-fulfilling by scaring consumers into not spending.

Much higher increases could tip an already fragile economy into recession. Indeed, US private-sector business activity fell for the second month in August, the weakest for 27 months, heightening fears of a recession.

He will need all the skills of an ace fly-fisherman. Looking carefully into the water before casting is said to be the most important trick in fooling your prey.

GlaxoSmithKline’s Dame Emma Walmsley has chosen well in attracting such a top biotech talent as Liz McKee Anderson to the board.

Anderson has enormous experience in infectious diseases, vaccines and immunology, having held posts at Janssen Pharmaceuticals and Wyeth Vaccines.

The US pharma executive, with degrees in engineering and finance, started in the chemicals industry but made her name in bringing innovative medicines to market.

She is also on the boards of BioMarin Pharmaceutical Inc, Revolution Medicines, Insmed, and Aro Biotherapeutics and a trustee of the The Wistar Institute, a leading US biomedical research organisation.

Anderson replaces Dr Laurie Glimcher who steps down as a non-executive in October. Good to see Walmsley keeping the old girls’ network going as she focuses on GSK being a pure biopharma play.

Come back Arthur Daley, all is forgiven!

The secondhand car salesman immortalised by George Cole in TV’s Minder series is back in fashion:

Dealerships such as Lookers report excellent profits as the price of used cars soars because the shortage of semiconductors led to a fall in new car sales.

As Daley would have said – a ‘nice little earner’.

Could house prices really fall 20%? This is Money podcast