If you think prices here are high, spare a moment for those living in the Baltic countries.

The Estonians are seeing the biggest increases in the cost of living in the EU, with inflation running at 23.2 per cent. The cost of a kilo of raspberries has nearly doubled to €10.90 while petrol has hit a record high of €2 a litre.

Similar price hikes are being experienced in neighbouring Latvia and Lithuania, where inflation is 21.3 per cent and 20.9 per cent respectively. 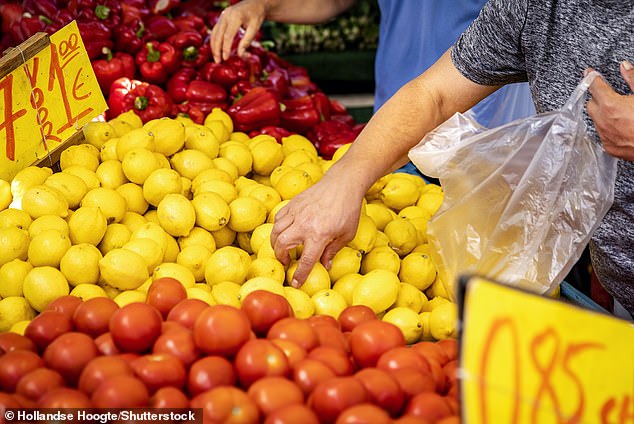 Price hikes: The Estonians are seeing the biggest increases in the cost of living in the EU, with France and Malta  seeing the lowest

Of the EU countries, the Baltic states are suffering the most. In contrast, those showing the lowest cost of living rises were France and Malta – both at 6.8 per cent – and Finland at 8 per cent.

According to the latest Eurostat figures, the eurozone saw inflation rise to a record 8.9 per cent year on year, the highest since the euro was created in 1999.

Across the EU, which includes countries with their own currency, inflation was higher still at 9.8 per cent.

It is inevitable that the European Central Bank (ECB) will raise interest rates again when the council meets next month, accelerating the race by policymakers world-wide to stamp down on inflationary pressures.

Whether interest rate rises will do the trick, however, is another matter as labour shortages – as seen in Estonia – and supply chain disruptions are still the main reason for runaway prices.

The danger is that the medicine will prove worse than the illness.

Yet for now, jacking up rates seems to be the only tool left for central bankers to wield.

Even wealthy, resource-rich Norway – and outside the EU – has put up rates higher than expected to 1.75 per cent in attempts to tame ‘persistent global price pressures’.

As the UK has been marked out as suffering the worst inflation among the G7, it is worth pointing out there are many countries in the EU with similar inflation levels to us.

They include Denmark, Ireland, the Netherlands and Spain at 10.7 per cent, although they can’t blame Brexit for their higher levels as some here still persist in doing.

What is clear, though, is that the UK – which hit the highest inflation rate for 40 years this week – is more exposed than countries such as France to higher prices because of more costly imports for energy and food.

And these are set to be even higher still, with inflation forecast to rise to 13 per cent in October when the new energy price cap comes into force.

It is why as soon as this interminable Tory leadership contest is over, the new PM must announce an emergency energy package for consumers.

Look at what the Germans are doing, slashing tax on energy bills by over half until 2024.

More pertinently, he or she must move immediately to help small business owners who have been devastated by stratospheric energy prices, some so high it’s hard to see how they will survive.

The way small businesses, which are not protected by any energy caps, have been treated over the past year is scandalous. If nothing is done soon, thousands will go bust.

Liz Truss and her team have let it be known that if she becomes PM, one of her top priorities is radical reform of the City’s regulators as part of a ‘wider war on technocrats’.

According to newspaper reports, Truss has her eye on merging the Financial Conduct Authority, the Prudential Regulation Authority – part of the Bank of England and responsible for ensuring the financial stability of the banks and insurers – and the Payment Systems Regulator, with oversight for money transfers, contactless payments and cash machines, into one big super regulator.

Truss is right that the regulators have many failings. But would the sum of the parts make for a better regulator?

It’s doubtful. It’s also not the moment for such big reforms. Instead, she should look across the Atlantic to see some of the work being done by the Securities and Exchange Commission’s Gary Gensler, particularly on tightening up rules in the ‘Wild West’ private equity markets.

What’s more, can you imagine the acronym they would come up with?

Country Garden, one of China’s biggest property developers, reports a massive slump in profits for the half-year and warns conditions will worsen.

Around $90billion has been wiped off China’s real estate market this year. The wheels are falling off fast.