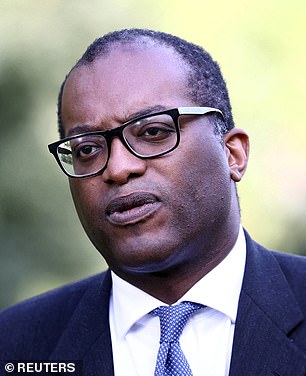 Nine million low and middle-income earners will be hit by a £46billion ‘stealth tax’ after the Chancellor failed to reverse a draconian four-year freeze on tax bands.

Kwasi Kwarteng portrayed his package as a tax-cutting mini-Budget – but pressed ahead with a bombshell tax raid sneaked in by his predecessor Rishi Sunak.

The extra money raised through the freeze will dwarf cuts in the basic and higher tax rates.

In a little-noticed measure in Sunak’s Budget in March last year, the amount at which people begin paying tax was frozen at the 2021/22 level of £12,570.

Sunak pegged the threshold for the 40 per cent rate at £50,271. Both thresholds will remain the same until the 2025/26 tax year. The move was announced before prices started soaring and was initially estimated to cost taxpayers £8billion. But the true cost has been rocketing due to escalating inflation, which is currently running at nearly 10 per cent.

Research conducted exclusively for The Mail on Sunday by the Centre for Economics and Business Research (CEBR) predicts that nearly five million lower-paid workers who currently pay no income tax will be dragged into the net over the next four years. Another 3.8million taxpayers will be pulled into the 40 per cent band as wages rise.

The CEBR reckons the changes will bring in an extra £46billion of revenue. Kwarteng could have ditched the freeze, but chose not to do so.

It means that the haul from the frozen allowances will offset the Chancellor’s giveaways and has provoked accusations of robbing Peter to pay Paul. ‘The Chancellor is largely bribing us with our own money,’ CEBR deputy chairman Doug McWilliams said.

The increased tax take from freezing personal allowances and thresholds is known as ‘fiscal drag’. ‘It’s a stealth tax,’ said independent economist Julian Jessop. ‘I don’t like it, I feel uncomfortable about it, and it would be better to index allowances properly.’

Tax bands are meant to rise in line with prices to ensure that no one pays more tax simply because of inflation.

Kwarteng’s tax handouts to households and businesses – which added up to about £45billion – were delivered alongside an energy price cap which will cost £60billion over six months if prices remain high.

Financial markets were already nervous that tax cuts would weaken the nation’s finances as the spectre of recession looms. Kwarteng’s announcements spooked investors and triggered a sharp sell-off of shares and bonds. In addition, a weak sterling was further hammered.

Kwarteng dropped the planned hike in National Insurance contributions and cancelled an expected rise in corporation tax. Most controversial of all he abolished the 45 per cent tax rate for those who are paid more than £150,000 a year. The basic rate of income tax will be cut from 20 per cent to 19 per cent from next April.

Public sector net debt is already high at £2.4trillion, just below the entire annual output of the UK. But the stealth tax receipts will relieve pressure on the Government’s finances – giving Kwarteng some breathing room.

The stealth tax has largely slipped below the radar and there has been no debate in Parliament about the fact that it will cost taxpayers far more than initially stated. The CEBR estimated the bill at £40billion earlier this year. Its latest forecast is based on the most recent government data. Financial markets believe interest rates will have to stay higher for longer if the Bank of England is to curb inflation. The cost of borrowing is expected to hit 4 per cent by the end of the year and is being predicted to peak at 5.5 per cent next summer. Last week, the Bank of England raised interest rates by 0.5 percentage points to 2.25 per cent – its highest level since 2008.

Some analysts are speculating that the Bank may be forced to intervene outside of its monthly decision-making cycle in a bid to calm markets, restore confidence and support the pound.

George Saravelos, global head of foreign exchange research at Deutsche Bank, said: ‘The policy response required to what is going on is clear: a large, inter-meeting rate hike from the Bank of England as soon as this week to regain credibility with the market.’

Creative industries need answers as revenues dry up: Showbiz in a tizz

SHARE OF THE WEEK: Shareholders hoping for Tui boost