Pub operator Mitchells & Butlers has cautioned that its annual energy expenses are anticipated to be almost double pre-pandemic levels.

The All Bar One and Toby Carvery owner said overall energy costs for the last financial year would be an estimated £150million, compared to £80million in the 12 months to September 2019.

It further warned that energy costs would continue to increase this year despite the Government’s incoming energy bill relief scheme for firms, which is set to last for six months starting from October. 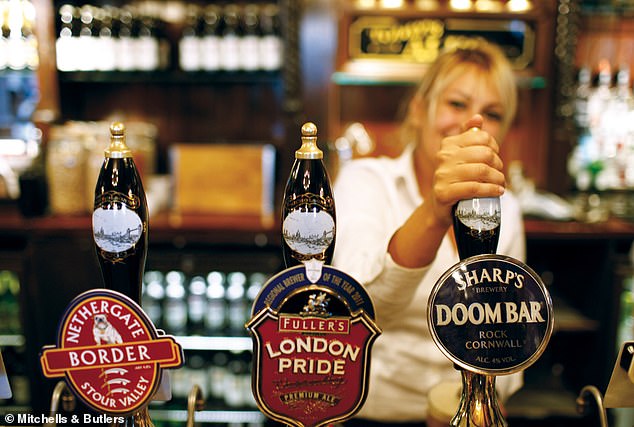 Prices: Toby Carvery owner M&B said overall energy costs for the last financial year would be an estimated £150m, compared to £80m in the 12 months to September 2019

Britain’s hospitality sector has come under gradually increasing pressure in the past year from rising bills, having already been financially hammered by pandemic-related lockdown restrictions.

Birmingham-based M&B said inflationary pressures had initially led to higher salary and food costs in the latter half of the recent fiscal year before spreading throughout most of its supply chain.

The FTSE 250 company still managed to see like-for-like revenues grow by 1.5 per cent in the fourth quarter, thanks to food sales offsetting a drop in drink orders.

Trade was hit by the summer heatwave and rail strikes, but it noted ‘encouraging’ demand over the August Bank Holiday weekend and solid performances from its premium food-led brands.

This failed to prevent the group’s total annual sales from dipping 1.3 per cent lower due to temporary site closures following the Omicron variant’s emergence last winter and the sale of certain venues.

Mitchells & Butlers shares fell 6.4 per cent to 126.5p during early morning trading, meaning its value has declined by roughly 47 per cent in the past year.

Firms across the hospitality industry are heavily concerned that the cost-of-living crisis will lead to lower sales as higher utility and fuel bills squeeze disposable incomes for millions of Britons.

Phil Urban, M&B chief executive, said: ‘The trading environment for the hospitality sector remains very challenging, with cost inflation putting increasing pressure on margins, and we are also mindful of the pressures on the UK consumer over the coming months.’

His counterpart at Shepherd Neame, Jonathan Neame, warned yesterday that the Kentish brewer and pub owner would likely see sales soften this winter because of growing fuel and energy prices.

Neame added that inflationary strains would mean the company, Britain’s oldest brewer, would take longer to return to pre-pandemic levels of profitability.

Victoria Scholar, head of investment at Interactive Investor, said: ‘With expectations for a UK recession and falling consumer confidence, discretionary spending is likely to struggle with less demand for restaurants and bars to come.’