MoneySupermarket shares soared on Thursday as the group posted first-half performance ahead of expectations.

The group revealed a stronger return to growth in travel insurance and travel than expected, and ‘exceptional’ trading across within its Money arm in the second quarter, driven by more competitive banking products.

Bank of England interest rate hikes have seen banks and building societies once again compete with one another in offering the most appealing savings rates for consumers. 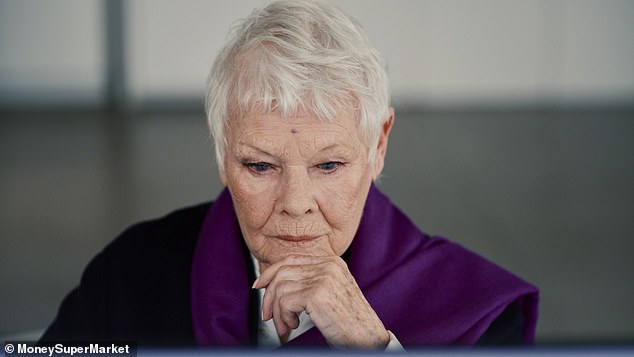 A strong performance across money and travel helped the company offset the impact of the dearth of a competitive energy supplier switching market.

Adjusted earnings before interest, tax, depreciation and amortisation rose 10 per cent to £56.6million, coming in ahead of expectations, and an interim dividend was maintained at 3.1p a share.

The comparison site, which is currently fronted by a new Judi Dench-fronted campaign, boosted its advertising spend by £20million in the first half, up to £83million from £63million he previous year.

The groud said its new campaign was ‘resonating well’ with customers.

It added: ‘Trading dynamics for the rest of the year will be influenced by macro developments in travel and the ongoing transition to a steady state in the car and home insurance markets following the introduction of the FCA General Insurance Pricing regulations.

‘We continue to expect the energy switching market to remain closed this year. On this basis the board is confident of delivering adjusted EBITDA around the upper end of market expectations for the year.’

Peter Duffy, chief executive of Moneysupermarket Group, said: ‘As the cost-of-living crisis bites, we’re doing all we can to help the British consumer.