NatWest has issued an urgent scam alert, after it found that half of all UK students had been targeted by fraudsters in the past academic year.

The alarming statistics were revealed in its 2022 Student Living Index, due to be released on Friday.

According to its findings, fraudsters have resorted to an array of tactics to raid student bank accounts over the past year. 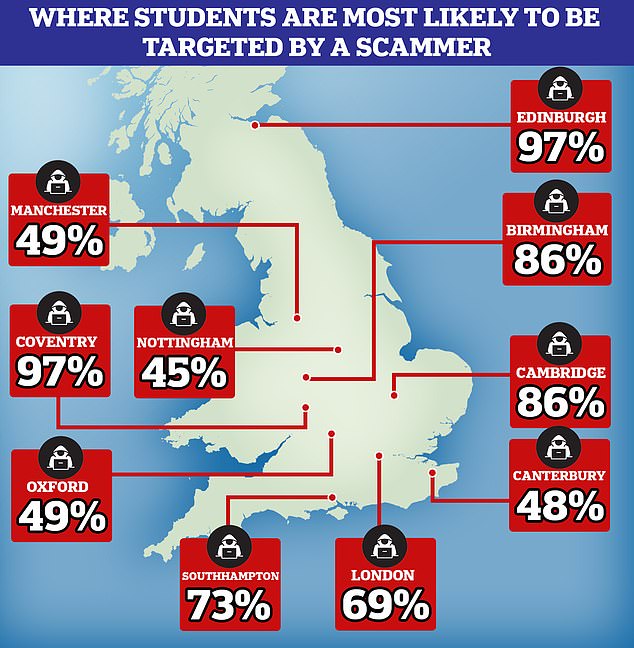 The proportion of students who report being targeted by a scam: Students in Edinburgh, Cambridge and Coventry were the most likely to have been contacted by a fraudster

Scammers have been increasingly posing as bank staff, it said, with a quarter of students being targeted via this method.

Criminals will use a range of communication methods, including fake text messages, calls or emails to collect money or personal details.

A further one in six students experienced an HMRC tax rebate scam over the past academic year, according to NatWest. As many as 16 per cent of students claimed they had been contacted by crooks claiming entitlement to a tax rebate.

A similar proportion of students were targeted by scammers pretending to be part of a delivery service, such as Royal Mail, DPD or Hermes.

These scams typically start when a shopper receives a fake delivery text, often saying that they need to pay a shipping fee for their parcel to be delivered.

Shipping fees on products coming from abroad have become more common since the UK left the European Union, so many customers will be duped into thinking the request is legitimate. 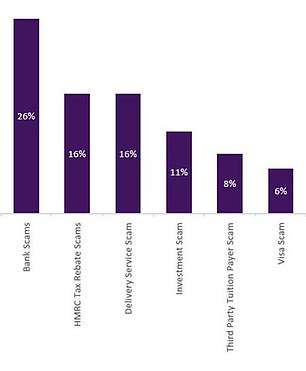 Financial fraud: One in four students encountered a bank scam in the past year, NatWest said. The next most common scams are tax rebates and delivery scams

They will be asked to input personal information, which then goes straight to the criminals.

Criminals engaging in these activities attempt to gather personal details such as a name, date of birth, address, and sometimes payment card details.

The fraudster often goes on to phone the victim, impersonating their bank, using these details to build trust and confidence.

Edinburgh, Cambridge, and Coventry were found to be the top three most-targeted university locations for student scams.

More than four in five students in each of these areas claimed to have experienced fraud.

‘We’d advise students to be on their guard when they receive an unexpected text message, email or phone call asking for personal details.’

How one student fell for a bank scam

Sarah, a NatWest customer and university student, received a call from someone purporting to be the NatWest fraud team.

The adviser on the phone – a fraudster – told Sarah that a number of suspicious transactions had been attempted on her account.

When Sarah confirmed she did not recognise these transactions, the caller advised her not to worry and that they would help her to protect her money.

She was told that as this was a fraud investigation, she should not discuss it with her family or friends.

Sarah was then told that these payments were scheduled to leave her account every month, and to keep her money safe she should move it to a new ‘safe account’ that had been set up on her behalf.

Sarah had recently learned that her landlord was increasing her rent each month, so the thoughts of these fraudulent transactions leaving her account and not being able to pay her rent made her extremely worried and stressed.

She made an initial transfer of £300 to the fraudster and later attempted to send another £1000.

It was only when the second payment raised an alert with NatWest that the scam was uncovered. 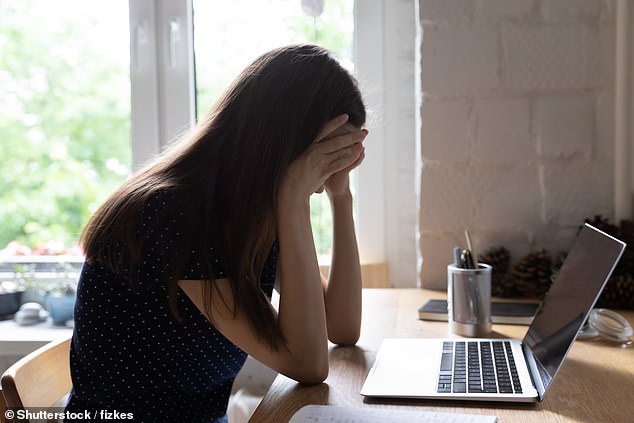 Tricked: The fraudster managed to convince Sarah that she needed to move her money to a new ‘safe account’ that had been set up on her behalf (image posed by model)

However, Sarah had been coached by the fraudster to tell the bank that the payment was going to her friend who needed the money urgently.

The real staff member at NatWest suspected that Sarah may have been the victim of a scam and so referred her to a customer support specialist to discuss the payment further.

As a result of this intervention by NatWest, the scam was uncovered and the payment of £1000 never left Sarah’s account.

What students need to look out for

NatWest is urging students to be sceptical of all unsolicited phone calls, texts or emails asking for personal or bank details.

Banks or the police will never ask for a full pin number or password or card reader codes, or ask customers to move money from their account.

It also advises students not to reuse and recycle the same passwords, and to use a unique password for their bank accounts and email accounts.

When it comes to online shopping, the bank is advising students try to shop online with websites they know and trust, using a debit or credit card.

If they see a deal online that looks too good to be true from a website they’ve never heard of, it’s probably a scam.

The bank is also warning students to be on the lookout for social media investment scams.

These often use fake celebrity endorsements and the promise of getting rich quick.