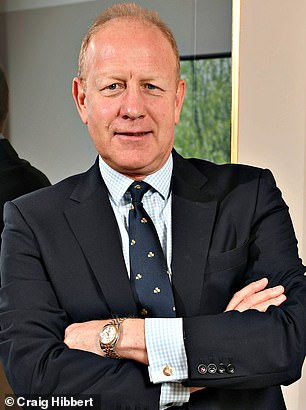 The new chairman of LV has ruled out ousting its beleaguered boss Mark Hartigan – even after he was called an ‘unmitigated disaster’ by members. Seamus Creedon was appointed as interim chairman of the historic insurer last month after his predecessor, Alan Cook, left following LV’s failed takeover.

But despite calls from LV members to get rid of Hartigan in the aftermath of last year’s disastrous bid to sell the business, Creedon has thrown his weight behind the chief executive. It is understood that, in conversations with the board, Creedon has vowed to keep the ex-army colonel for as long as he is chairman.

In an attempt to deflect criticism from Hartigan, he has pinned the blame for LV’s collapsed takeover by private equity shark Bain Capital on Cook. But the continuing presence of Hartigan is likely to anger LV’s members, who own the firm due to its status as a mutual.

They were infuriated with his lack of transparency as he tried to persuade them to vote for the Bain deal last December, especially when it emerged that he stood to make millions of pounds if it went through.

Hartigan admitted that his £1.2million pay package would have been significantly higher under private equity ownership, and he could even have been handed an equity stake. Members, meanwhile, were left unsure about what they would gain.

The business is run for their benefit and not to make money for a profit-hungry shareholder. But under Bain’s ownership, that would all have changed.

LV was founded in 1861 to help families protect themselves from the shame of a pauper’s funeral. Members were worried that a private equity takeover would cause the business to lose its core values.

But since members voted down the deal in December, LV’s board turned down a rival offer from Royal London and said LV could survive on its own.

The U-turn sparked more mistrust among LV’s 1.3million members, and Hartigan has been under pressure to resign.

In a letter to Creedon, LV member John Higgins, who has been part of the mutual for more than 50 years, urged him to appoint a new boss.

Higgins said: ‘You claim that you will rebuild the LV board to support the CEO Mark Hartigan.

I, together with many other concerned LV members, consider that Mark Hartigan should have resigned immediately [after he] had lost the crucial vote last December and have repeatedly called for him to go.

‘The general consensus among my colleagues and business friends is that, as the CEO of LV, Mark Hartigan has been an unmitigated disaster.

‘We do not believe that you will be able to achieve your objective until Hartigan has gone.’

Creedon himself was a controversial appointment as chairman. He had been on the board throughout the takeover talks with Bain – and his promotion flew in the face of calls to install a fresh face at the top.

When he took the job last month, he said: ‘I will be working closely with Mark Hartigan who has been doing an excellent job in strengthening the performance of the business.

‘The board takes full responsibility for the unsuccessful transaction which Mark actively advocated on its behalf and my colleagues and I have high confidence in him and his team.’