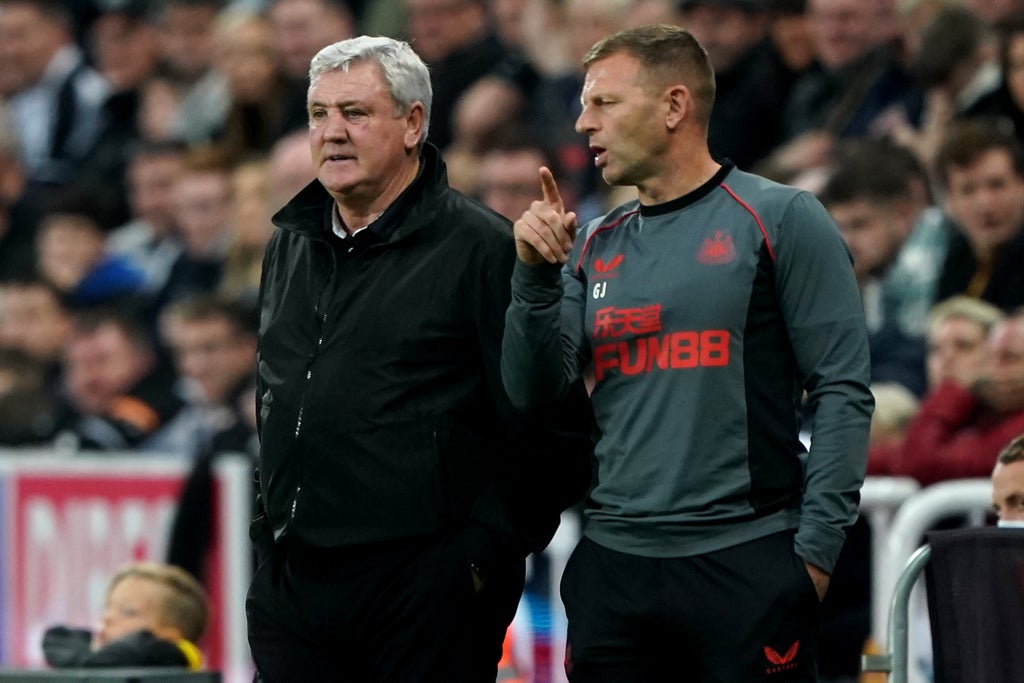 Newcastle United interim boss Graeme Jones confirmed he has been asked to take charge of the next two Premier League games as the search for Steve Bruce’s successor continues.

After Amanda Staveley’s Saudi-backed takeover, Bruce’s tenure ended on Wednesday following the home defeat to Tottenham last weekend, which was his 1,000th game as a manager.

Former Shakhtar Donetsk and Roma boss Paulo Fonseca has emerged as a leading candidate, while ex-Bournemouth manager Eddie Howe and former Borussia Dortmund coach Lucien Favre are also said to be under consideration.

However, Jones, who joined the staff at St James’ Park in January having worked successfully under Belgium boss Roberto Martinez, will remain focused on the current job in hand – starting at Crystal Palace on Saturday.

“I spoke to the owners on Wednesday morning and they have asked me to take the team on an interim basis for the next two games, so Crystal Palace and Chelsea at home,” Jones said at a press conference.

“I’ve said previously, I am fully focused on preparing the team the best we can to be competitive in both games.”

Jones was credited with playing a significant role in last season’s successful fight for Premier League survival and went on to be part of Gareth Southgate’s England staff for the Euro 2020 finals during the summer.

Despite being ready to take on the challenge tasked for him by Newcastle’s new owners, Jones expressed sadness following Bruce’s exit.

“Initially it was one of upset if I am being honest because I had a great working relationship with Steve, he is a good man,” Jones said. “You never want to be in and around that in football because it means it has not worked. Initially on Wednesday it was difficult, this is true.

“But we all know the speed of football and how quickly it needs to move on because if you miss a day or you miss a training session, you are not as prepared as you could be for tomorrow’s game.

“The focus quickly changed on Thursday and Friday in terms of positivity and getting the boys ready tactically for the game.”

Jones revealed his relationship with Bruce had been “excellent in every aspect, both personally and professionally”.

Born in Gateshead, former Luton boss Jones is determined to adopt a positive approach to his time at the helm, however long it happens to be.

“My ambition is simply to do the best I can for my football club,” said Jones. “I am motivated in a totally different way to anywhere I have ever been.

“I came to the football club as a four-year-old watching ‘Supermac’ (Malcolm Macdonald) then I was a supporter watching Kevin Keegan in the Gallowgate End. I know the culture of this football club, whether I was here or not, I am interested in the club’s results.”

Jones feels Newcastle supporters have plenty to look forward to under the ambitious new owners over the campaigns ahead.

“We all know that in the long term, if you are going to win leagues or the FA Cup, you have got to have the best players and I am afraid that only money buys that,” he said.

“You have got a chance to be in the ball game, to be competitive long term so there is huge hope for the future of the club.”

Before any talk of title challenges and bringing the world’s elite to St James’ Park, Newcastle must get things right on the pitch with the players they currently have as they aim for a first win of the Premier League season against Palace.

“Patrick’s (Vieira) gone there and put his own stamp on the club, they are a little more possession-based now,” said Jones, who is missing midfielder Jonjo Shelvey through suspension.

“Whatever side I decide to go with tomorrow, they will all be ready and all know their jobs.”