The outlook for the global economy darkened yesterday as soaring inflation in the eurozone and a slowdown in manufacturing worldwide sparked fresh tremors on financial markets.

With fears of recession mounting, official figures showed inflation in the single currency bloc hit 8.6 per cent in June on the back of sharply higher food and fuel prices.

That was more than four times the 2 per cent target and the highest rate since the creation of the euro in 1999 – piling pressure on the European Central Bank to raise interest rates. 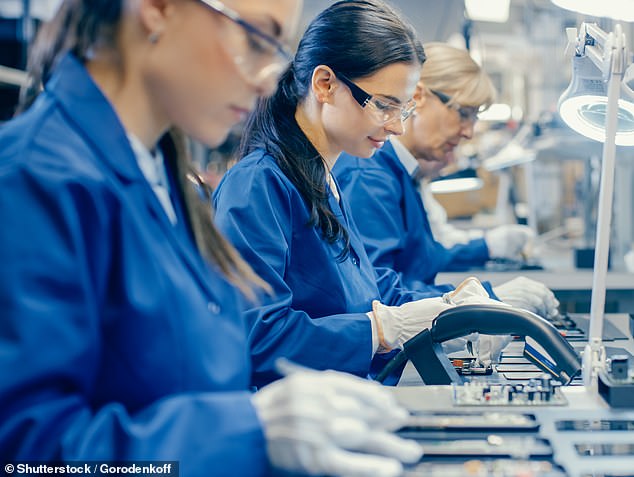 Struggle: A string of reports showed manufacturers struggling in Britain, the eurozone and the United States

And in a sign economies around the world are slowing, a string of reports showed manufacturers struggling in Britain, the eurozone and the United States.

Tech tycoon Mark Zuckerberg, the founder of Facebook, said: ‘If I had to bet, I’d say that this might be one of the worst downturns that we’ve seen in recent history.’

But warning against undue pessimism, Ryan Sweet, a senior economist at Moody’s Analytics in the US, said: ‘There is a risk that we talk ourselves into a recession.’ Fears that the world is heading for a ‘hard landing’ reverberated through financial markets.

Having racked up its worst half-year against the dollar since 2008 – falling 10 per cent – sterling was hit once again, falling back below $1.20. The euro was also sharply lower against the greenback as investors worried about the outlook rushed to the dollar, which is seen as a so-called ‘safe haven’ in times of trouble.

Government bond yields – an indicator of what it costs countries to borrow – also fell as investors bet central banks will be forced to limit how far they can raise interest rates given the risk of recession. And copper prices – often seen as a good indicator of global economic strength – fell more than 3 per cent to below $8,000 a tonne. And oil nudged higher as supply outages in Libya and expected shutdowns in Norway outweighed expectations that an economic slowdown could dent demand.

The crisis gripping the global economy has given central banks a headache as they battle to curb sky-high inflation with interest rate hikes that could tip the world into recession. The economic recovery from Covid has been derailed by global supply chain issues and the war in Ukraine, as well as renewed coronavirus restrictions in China. Living standards around the world have suffered as food and energy prices soar, with inflation in the UK at a 40-year high of 9.1 per cent while it is at a 41-year high of 8.6 per cent in the US.

Despite inflation hitting a record 8.6 per cent in the eurozone, the ECB has not raised rates for more than a decade and they currently stand at minus 0.5 per cent. Christine Lagarde, president of the central bank, has signalled that the first rate hike since 2011 will come this month.

By contrast, the Bank of England has raised rates five times since December, from 0.1 per cent to 1.25 per cent, but never by more than 0.25 percentage points at a time.

The Federal Reserve in the US – where inflation is at a 41-year high of 8.6 per cent – has been even more aggressive, raising rates three times by 0.25, then 0.5 and then 0.75 percentage points. Warning the ECB has been slow to act, Carsten Brzeski, an economist at ING, said: ‘Stubbornly high inflation and longer-term inflation projections above the 2 per cent target have made a first rate hike overdue.’

Factory output in the eurozone fell in June for the first time since the initial wave of the coronavirus pandemic two years ago, S&P Global reported. And British manufacturers also lost steam with confidence at its lowest level since May 2020. While in the US, manufacturers endured their worst month for two years.