A Pittsburgh area police detective who is also a member of an FBI task force filed for divorce from his wife after she was photographed with another man while allegedly taking part in the MAGA riot at the US Capitol on January 6.

Jennifer Heinl, 55, of Ross Township, Pennsylvania was arrested on Thursday and charged with a number of federal crimes, including violent entry and disorderly conduct.

Heinl is the wife of Michael Heinl, a highly regarded detective with the Shaler Township Police Department.

Federal investigators allege that Heinl was pictured in surveillance footage speaking to another man, Kenneth Grayson, inside the Capitol Rotunda during the chaos on January 6.

The FBI alleges that Heinl and Grayson, a resident of nearby Bridgeville, Pennsylvania, were communicating via Facebook beginning in November.

During those alleged discussions, they spoke of plans to travel to Washington, DC as well as arrangements for hotel accommodations and rental vehicles.

The FBI alleges that the woman on the left, Jennifer Heinl, 55, of Ross Township, Pennsylvania, took part in the January 6 MAGA riot at the US Capitol. She is photographed on the left in this undated file photo alongside Kenneth Grayson, a resident of Bridgeville, Pennsylvania, who was also arrested and charged for his role in the riot 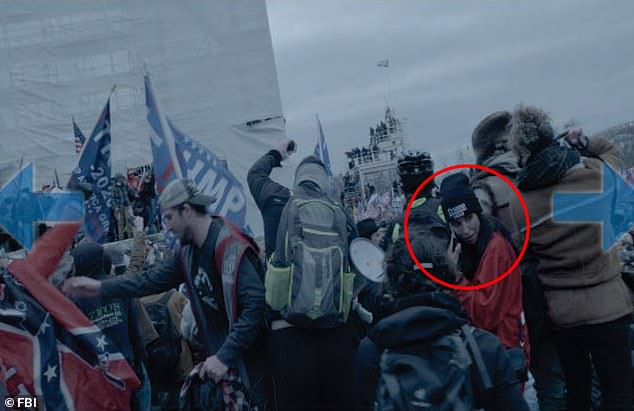 The FBI alleges that Heinl is the woman pictured above wearing a dark hat and a red, long-sleeved shirt 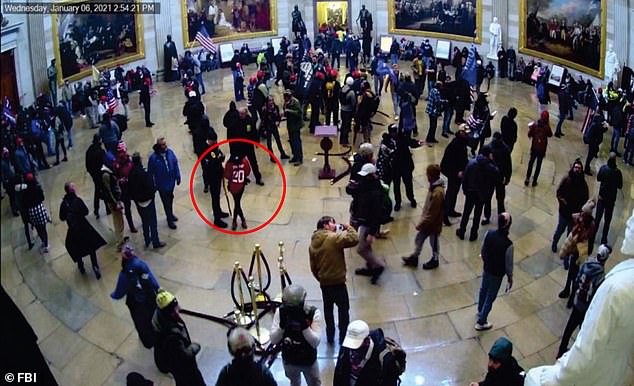 According to the FBI, Heinl is seen above speaking to Grayson inside the US Capitol Rotunda on January 6 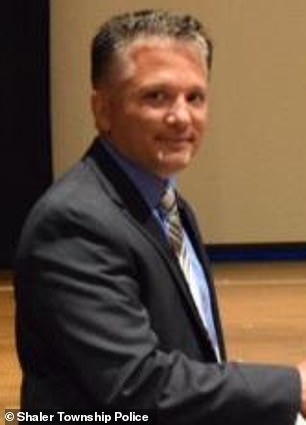 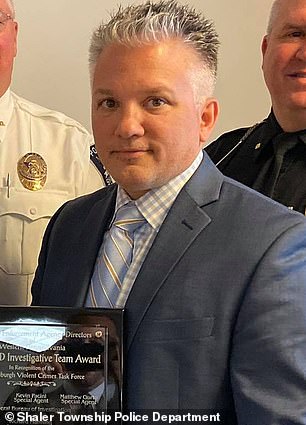 Michael Heinl (above), a detective with the Shaler Police Department, filed for divorce from his wife a month after the Capitol riot

Heinl told the FBI in late January that she fell out of touch with Grayson and that she did not stay at the same hotel during their time in the capital.

She said she arrived in Washington on January 5 and left the day after, court papers allege. Heinl told investigators she drove to the rally alone and did not bring any associates with her.

Heinl also told investigators she met Grayson at the Ellipse near the White House. She has also denied entering the US Capitol building.

In its arrest affidavit, the FBI includes a photo that it says shows Heinl and Grayson in the capital. 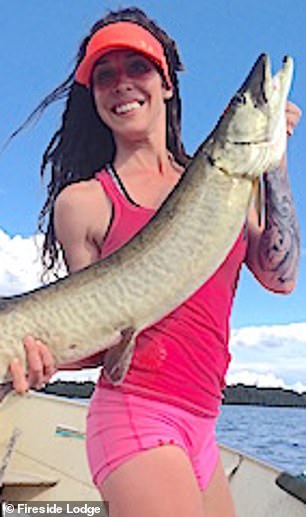 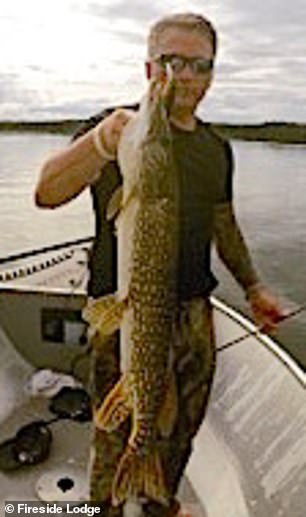 Jennifer Heinl and her husband are photographed in the above undated file photos. According to Michael’s boss, Shaler Police Chief Sean Frank, Michael tried to discourage Jennifer from traveling to Washington, DC on January 6

Investigators claim that they obtained the photo during a search of Grayson’s iPad.

In late January, Grayson was also charged in Pittsburgh federal court for knowingly entering or remaining in a restricted building; disorderly conduct impeding government business; disruptive conduct in the Capitol building; parading, demonstrating or picketing in the Capitol; and obstructing an official proceeding.

According to an FBI affidavit, Grayson live-streamed video of himself on Facebook showing him and others inside the Capitol building.

Facebook users who watched the live-stream contacted the FBI and identified Grayson, it is alleged.

In the affidavit, photos alleged to be of Grayson in Washington, DC show him wearing a black-hooded sweatshirt with an American flag patch on the arm, the letter ‘Q’ on one lapel, a ‘Don’t Tread On Me’ flag on another lapel, and a black Pittsburgh Pirates baseball cap.

Heinl is the wife of Michael Heinl, a detective in the Shaler Police Department who has been on the force for 30 years. Heinl is also a member of the FBI Pittsburgh office’s Violent Crimes Task Force.

DailyMail.com has reached out to Michael Heinl, Jennifer Heinl, and Grayson seeking comment.

According to his LinkedIn page, Grayson is a consultant for Rice Energy, a Pennsylvania-based oil and gas company. 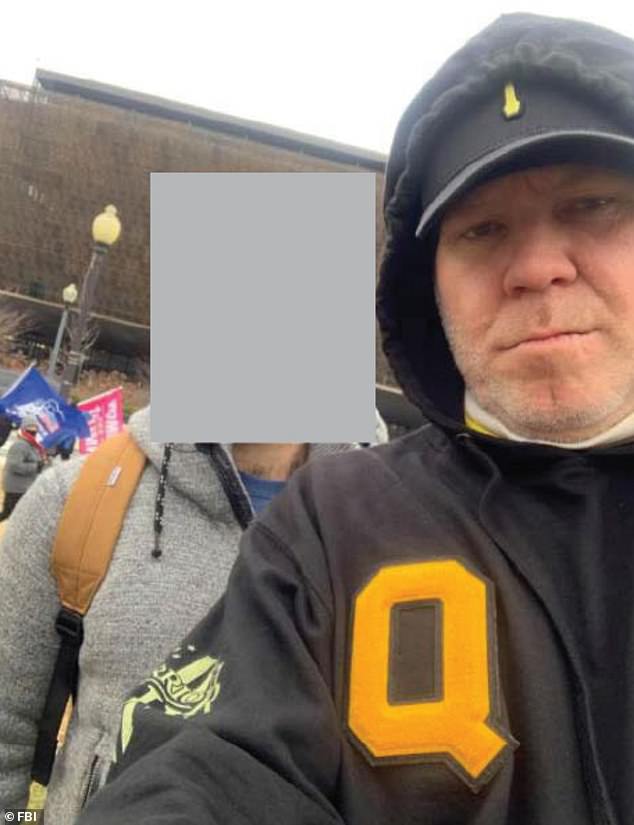 According to the FBI, Grayson is the man photographed above wearing a QAnon sweater on the day of the riot in Washington, DC on January 6 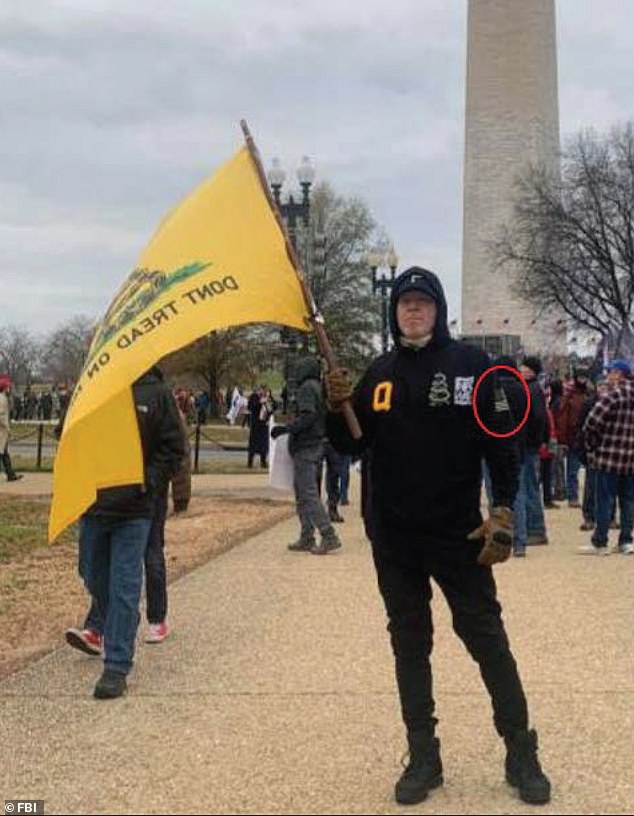 In the arrest affidavit, photos alleged to be of Grayson in Washington, DC show him wearing a black-hooded sweatshirt with an American flag patch on the arm, the letter ‘Q’ on one lapel, a ‘Don’t Tread On Me’ flag on another lapel, and a black Pittsburgh Pirates baseball cap

Jennifer works as a web and graphic designer for a distributor of nuts in Western Pennsylvania, according to her LinkedIn bio.

Michael’s boss, Shaler Police Chief Sean Frank, told the Pittsburgh Post-Gazette on Friday that Michael pleaded with his wife not to go to Washington, DC on January 6.

Jennifer, an avid Trump supporter, was planning to attend the ‘stop the steal’ rally near the White House in which the then-president addressed the crowd.

After Trump lost the November 3 election to Joe Biden, he alleged that he was the real winner and that the vote was tainted by widespread fraud. No evidence has surfaced to support the claims.

Trump urged his supporters to rally in the capital on January 6 – the day on which Congress was scheduled to meet to certify Biden as the winner. After the rally, hundreds of Trump supporters stormed the Capitol building.

Five people were killed in the violence, which forced members of Congress to go into hiding while rioters occupied the congressional building for hours. After the premises were cleared, Congress met and certified Biden’s victory.

Since that day, more than 300 rioters have been arrested and charged by federal authorities for trespassing, disorderly conduct, and other crimes.

‘His wife was a part of that situation,’ Frank said of Michael and Jennifer Heinl.

‘He didn’t condone it. He didn’t ask her to go there. He wasn’t there.

‘He was here working.’

After the riot, Frank said that Michael approached him to let him know that his wife was at the Trump rally.

But Frank added that he did not believe Michael knew Jennifer was among those who entered the Capitol building.

Weeks after the riot, Michael filed for divorce from Jennifer, according to the Post-Gazette.

Michael is not a subject of the investigation, which was conducted by the FBI’s Pittsburgh office. 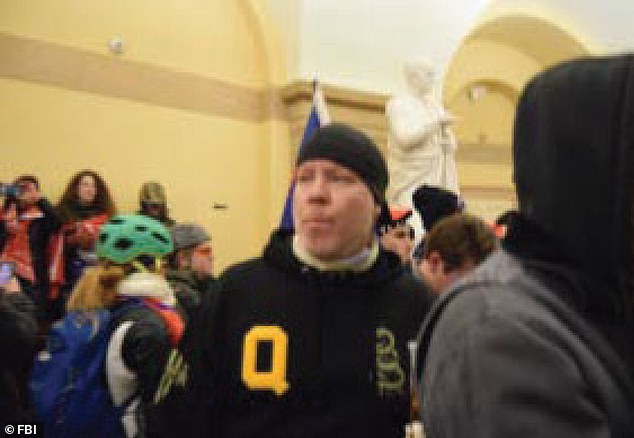 Grayson is seen above inside the US Capitol building during the MAGA riot, according to the FBI 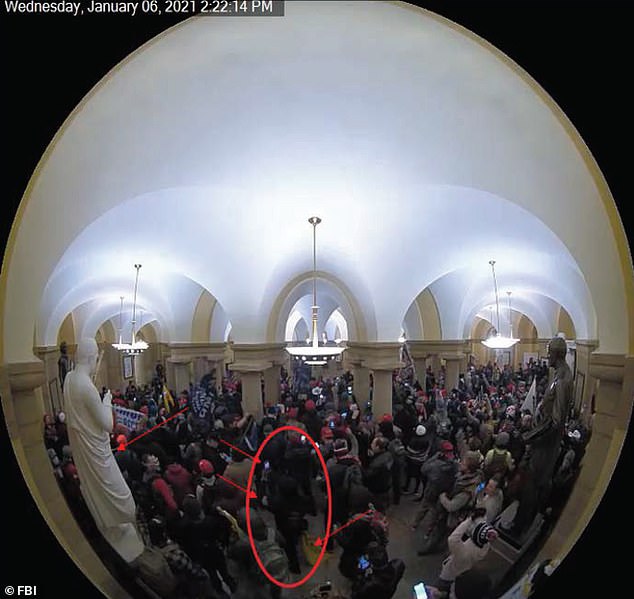 Frank said Michael, who is normally assigned to work cases involving child abuse and violent crime, is an exemplary worker.

‘He’s got some advanced experience and training in some different areas of investigation.

‘He’s received numerous awards throughout his career for the work on different cases that he’s been involved in.’

Frank said he believed it was unfair that media reports about Jennifer’s arrest created the impression in the minds of the public that Michael was supportive of her alleged crimes.

Jennifer made her first appearance in Pittsburgh federal court on Thursday.

During her court appearance, it was mentioned that she was married to a member of law enforcement and that it would be best if Michael was to secure his weapon outside of the home.

An FBI arrest affidavit alleges that Jennifer is the woman photographed wearing a red, long-sleeved shirt with ‘Trump 20’ emblazoned on the back.

Photos of Jennifer allege to show her with a black hat and lettering on the front.

‘If somebody would ask me, “Would Jennie Heinl ever be involved in something like this?” years ago, I’d have said impossible, never.

‘But, she has some political beliefs. She’s conservative and she believed that she was supporting the president.’

A preliminary hearing is scheduled in Pittsburgh federal court for Wednesday.

‘They’re right. The question is – where does this fall? I mean, you know we have statutes and was it a violent entry? Was she violent?

‘Was she parading? She was demonstrating.’

Jennifer has been released on a $10,000 unsecured bond.