Interest rates could increase five times this year as the Bank of England battles against inflation, according to City experts.

They are predicting that rates will jump from the current level of 0.25 per cent to 1.5 per cent by the end of the year.

That would be the highest level since the depths of the financial crisis in 2009 – with the increase adding almost £1,300 a year to the cost of a typical mortgage. 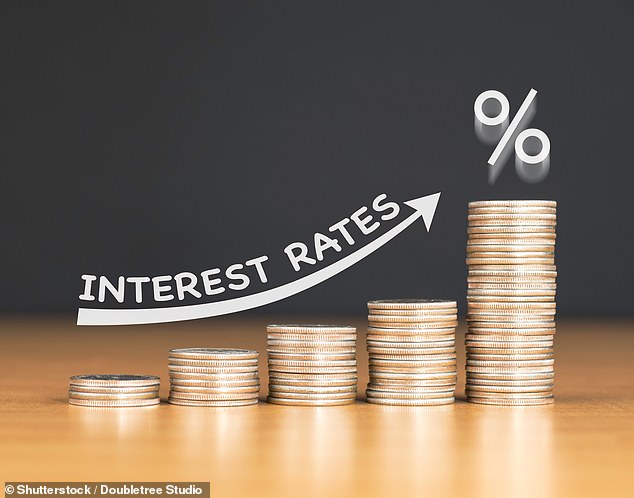 Increase: City experts are predicting that rates will jump from the current level of 0.25 per cent to 1.5 per cent by the end of the year

City analysts are warning that the rise will be a shock to those who are accustomed to cheap home loans, even if rates peak at a lower level than the 1.5 per cent being priced in by stock markets.

Rates have been at 0.5 per cent or lower for much of the last 13 years. They were slashed to a record 0.1 per cent low when the pandemic struck.

About ten million British adults have never experienced base rates above 1 per cent, according to analysis by AJ Bell.

Experts at Capital Economics expect four hikes in the coming year, taking rates to 1.25 per cent.

The Bank’s monetary policy committee raised rates to 0.25 per cent last month as the economy fired up again and inflation jumped to 5.4 per cent.

The committee is widely tipped to be ready to strike again this week – pushing rates up to 0.5 per cent on Thursday – and further increases are expected.

The rises are set to affect about two million mortgage borrowers on variable repayment rates.

Simon French, an economist at City broking firm Panmure Gordon, said: ‘A single rate increase this week won’t harm the UK economy, but financial markets are now pricing in four more increases by the end of the year.

‘This will present a whole new challenge to a generation of borrowers who have never seen UK interest rates above 1 per cent.’

The Bank has raised rates just three times in the past 15 years.

Laith Khalaf, head of investment analysis at AJ Bell, said: ‘Markets are expecting a significant number of rate hikes this year. This would be a paradigm shift for investors, businesses and consumers – all of which have become accustomed to a prolonged period of extremely accommodative monetary policy.’

Bee sting triggers man, 49, to suffer acute stroke due to adverse reaction to the venom

Meghan and Harry teaser release intended to 'get a massive rise out of press', says expert