Regulators look set to be grilled by MPs after ructions on financial markets pushed pension funds to the brink of disaster.

The Bank of England this week pledged to buy bonds on ‘whatever scale is necessary’ to restore order – as it warned of a ‘material risk to UK financial stability’.

Its intervention was required to prevent a meltdown in the pensions industry, and shone a light on liability-driven investments (LDIs), which are used by final salary pension funds covering millions of savers to ‘hedge’ against the impact of interest rates and inflation. 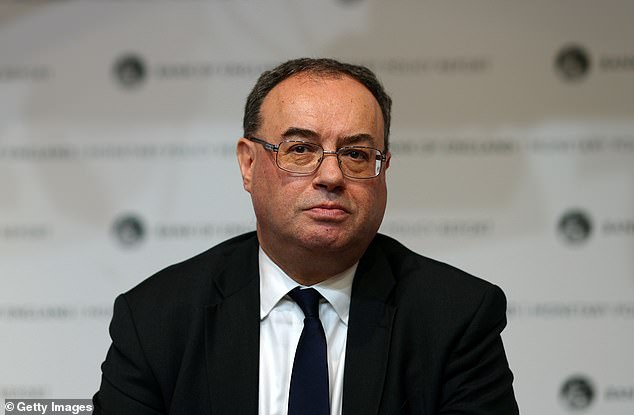 In the spotlight: Sources in Westminster said the Treasury select committee was likely to seek answers from Bank Governor Andrew Bailey (pictured) and other officials

But they were built with layers of debt using gilts as collateral, creating a ‘time bomb’ that almost exploded this week.

Regulators including the Bank, Financial Conduct Authority (FCA) and The Pensions Regulator can expect to be quizzed by MPs on what was nearly a full-blown pensions crisis.

Sources in Westminster said the Treasury select committee was likely to seek answers from Bank Governor Andrew Bailey and other officials this year. ‘The committee regularly holds sessions with the Bank. This could be discussed,’ the source said. Next chief executive Lord Wolfson said LDIs were offered to his company in 2017 but did not ‘smell right’ and looked ‘very dangerous’ – so he alerted the Bank to a looming ‘time bomb’.

A year later, in 2018, the Bank said some pension funds were not paying sufficient attention to risks of a cash crunch. By 2021 LDIs underpinned £1.6trillion worth of liabilities, covering millions of savers – four times higher than ten years before.

A sudden collapse in the price of UK government bonds, known as gilts, after Kwasi Kwarteng’s mini-Budget left them scrambling for cash and on the brink of insolvency. It prompted a £65billion bailout by the Bank, resulting in an accusation that regulators had failed.

Tory MP Kevin Hollinrake, a member of the Treasury select committee, said: ‘These LDIs haven’t been something that has been fully considered in the past and they should be.

‘I am sure the FCA will look at it in more detail and it would make sense if the committee did that as well.

‘Anything that presents a systemic risk is something we should have a handle on. I think the regulator needs to look at the situation very carefully and also examine its own role in this situation, whether it has managed those risks sufficiently.’

Bank chief economist Huw Pill this week conceded it has ‘some work to do in throwing light on and building resilience in some of the shadowier parts of the non-bank financial sector’. As gilt prices fell, LDI funds had to sell assets to raise cash as collateral, sparking a vicious plunge in values until the Bank acted.

An LDI collapse would have threatened the financial health of final salary pension schemes covering about 10m people.

The LDIs were overwhelmed as gilt prices halved.

Baroness Altmann, a former pensions minister, called for a wide-ranging inquiry, saying: ‘The real issue underlying this has been what happened to economic and monetary policy over the last few years and the illusion gilts were risk-free.’