Russia sanctions send global markets into a tailspin as price of oil, gas and wheat soars

By Hugo Duncan and Mark Shapland For The Daily Mail


Russian stocks took another battering on financial markets as the West imposed tough sanctions on Moscow following the invasion of Ukraine.

As the rouble crashed 30 per cent to an all-time low and Moscow more than doubled interest rates to 20 per cent, shares in companies exposed to Russia tumbled.

And the price of oil, gas and wheat rose as war threatened supplies. ‘The trading environment is highly dynamic,’ said Peter Garnry, equity strategy head at Saxo Bank. ‘Things could get a lot worse from here.’ 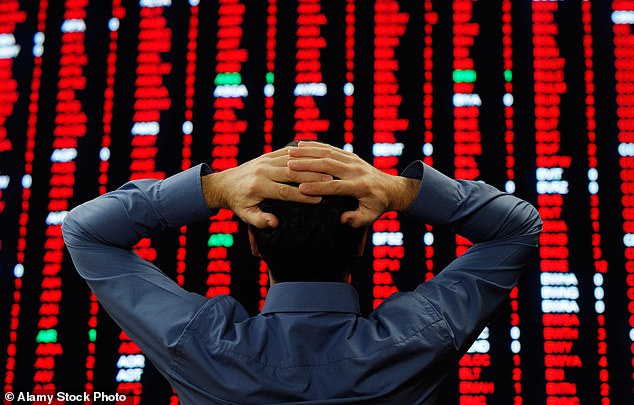 Market turmoil: On a day that saw the rouble crash 30% to an all-time low, shares in companies exposed to Russia tumbled on international exchanges

The ructions came as the West targeted Russia’s financial system with new measures after Vladimir Putin put his nuclear forces on high alert.

Having already announced plans to exclude Russia from the Swift global payments system, the UK said there would be a full asset freeze on all Russian lenders within days as Chancellor Rishi Sunak joined forces with the US and EU to cut the Central Bank of Russia off from the West.

The moves have left commercial banks in London racing to comply with the sanctions, some of which came into force immediately. One source described it as ‘an intense amount of work’.

Sunak and Bank of England Governor Andrew Bailey said the sanctions ‘will inflict devastating consequences on President Putin and Russia’.

People were pictured queuing at cash machines as the value of the currency collapsed and UBS warned of ‘concerns about larger-scale bank runs’. The fallout rippled across markets.

Russian regulators refused to open the stock market in Moscow but Russian stocks on other exchanges were hammered. 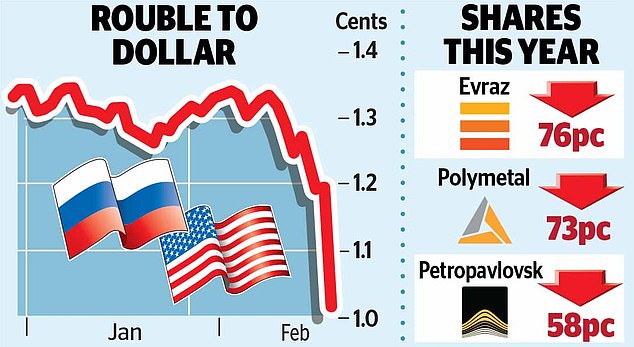 Evraz has now lost 76 per cent of its value this year, wiping nearly £2billion off Abramovich’s stake.

UK stocks were also hit and HSBC, NatWest, Barclays and Lloyds all lost more than 2.5 per cent of their value. Insurer Prudential was down 4 per cent.

Fuel prices in the UK hit record highs, with the average price of petrol jumping to £1.51 a litre.

The bond market was also feeling the heat as investors braced for the possibility that Russia could default on its debt for the first time since 1998.

It invests around 80 per cent of its cash in Russian companies and has major holdings in gas giant Gazprom, the largest bank Sberbank, Moscow tech firm Yandex and oil group Rosneft. It has fallen 45 per cent so far this year.

Liontrust will not allow investors to buy or take money out of the fund until further notice and gave no indication of when the suspension would be lifted.

The move was considered ‘in the best interests of all investors’ after the Moscow Stock Exchange closed yesterday and Russia temporarily banned foreigners from selling securities such as shares and debt to stem a collapse in the rouble’s value.

Popularity of equity release soaring as millions of households struggle

Wish you were here! Firm plans first-ever space hotel to open in 2025

Popularity of equity release soaring as millions of households struggle