It’s hard to ascribe a reason for the seemingly lacklustre performance of shares in MP Evans Group, the sustainable palm oil producer, which have barely flickered in the wake of what, on the face of it, appeared to be a commendable set of interim numbers.

Overlooked, underappreciated, misunderstood? Perhaps the upside has already been priced in? Possibly. More likely the British investing public just isn’t familiar with what MPE does.

Easy to understand are the fundamentals driving MPE and its financial performance. Providing the impetus is the global demand for palm oil, a constituent in food products, cosmetics and biofuels. 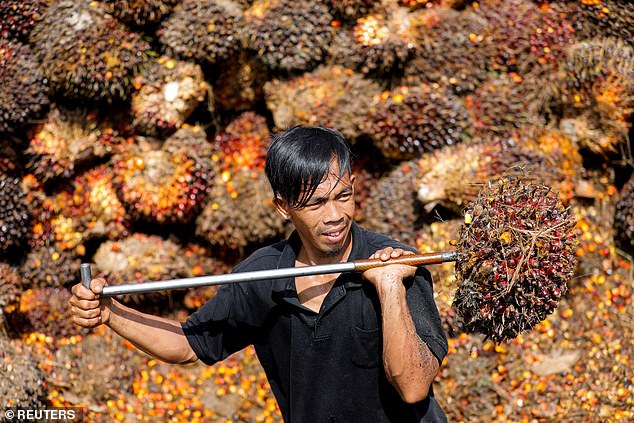 Palm oil: A short-lived ban on Indonesian exports has now been lifted

The company is part of the 200million tonnes per year, and growing, vegetable oil market. Palm oil, at 71million tonnes, is the biggest component.

The market mechanics have been affected by Russia’s invasion of Ukraine, the bread basket of Europe and also the source of much of its sunflower oil.

This has pushed up demand for crude palm oil and, with it, prices, which have averaged over $1,600 per tonne (CIF Rotterdam spot price) in the first half, up 45 per cent year on year. While things have cooled a little, the price, at around $1,000 a tonne currently, is still well above the norm.

The only fly in the ointment has been the rather unpredictable behaviour of the government of Indonesia, the world’s biggest producer of palm oil, and home to the company’s plantations and milling facilities.

A short-lived ban on exports has since been lifted and normal service resumed.

MPE chief executive, Matthew Coulson, sees the episode as just that – an isolated incident unlikely to be repeated.

‘The export ban only lasted for three to four weeks,’ explains Coulson. ‘It was protested quite strenuously and it would have hurt Indonesia which receives significant tax revenues from this source.

‘We would like to think that things have calmed down now.’

MPE is a company with a 150-year rich history that has fully bought into the modern imperative of being a sustainable business.

A member of the Roundtable on Sustainable Palm Oil (RSPO) since 2005, MPE has clear policies on ‘no deforestation and no burning’, practices that have previously given the industry a poor name.

‘It’s fundamental to us to be a responsible producer of certified sustainable palm oil,’ explains Coulson.

‘That means working extremely closely with the RSPO. We have been members for an extremely long time and we continue to be – so all of our estates are established, developed run to RSPO standards.’

Its strategy also has a significant social dimension as it also provides high-quality housing and facilities for its workers.

In all, it employs 10,000 people in Indonesia, and farms 52,800 hectares of planted oil palm – 40,000 of which is owned by the group, with the remainder managed for smallholders.

By the end of the year, with the completion of the palm-oil mill at the Musi Rawas operation in South Sumatra, it will have six mills processing crude palm oil (CPO).

In the six months to June 30, its output was just under 161,000 tonnes of CPO – flat year on year. The swing factor for MPE was the sales price achieved at mill gate, which jumped 43 per cent year-on-year to $1,035 per tonne.

That in turn resulted in a 49 per cent increase in operating profit to $61.7million.

Cash generation over the past 12 months has been such that the company has wiped out net debt totalling $67.7million to find itself in a net cash position of $13.5million as of the end of June.

Investors will be rewarded with a 25 per cent increase to the interim dividend.

Going forward, MPE aims to grow sustainably by increasing its crop yields per hectare as its estates continue to mature. Not just that, it is looking at acquisitions – particularly opportunities where it can add value by improving yields.

And as Peel Hunt, the company’s corporate broker pointed out, the group is only just starting to see the fruit (no pun intended) of its Indonesia investment programme.

The ongoing investment saw the company’s net asset value (NAV) grow by 15 per cent to 1,265p a share last year.

To put that into context, the shares, at 846p each, are currently trading at a 33 per cent discount to the NAV.

The dividend yield, meanwhile, is around 5.6 per cent – which even on the current trajectory for interest rates is still more than you’d get from your current account.

Its 30-year track record of increasing the pay-out more than qualifies it for dividend aristocrat status. To be known as an aristocrat a company must have paid and raised the dividend for 25 consecutive years.

Against that backdrop, some investors will be asking: where’s the catch?

The more savvy stock pickers know the market isn’t always the perfect arbiter of value and anomalies, like nuggets in a gold pan, sometimes appear.