Social care hit by ‘perfect storm’ as costs balloon by £3.7bn and demand ramps up amid shortage of staff and beds, local councils warn

By Tanya Jefferies for Thisismoney.co.uk

Without extra funding, quality and access will have to be scaled back further, meaning people could be waiting longer than they do now for a care package, they say.

Prime Minister Liz Truss is being urged by the County Councils Network to ‘follow through’ with a promise of more spending on adult social care over the next two years – though she has vowed to abolish the National Insurance rise meant to fund the new Health and Care Levy. 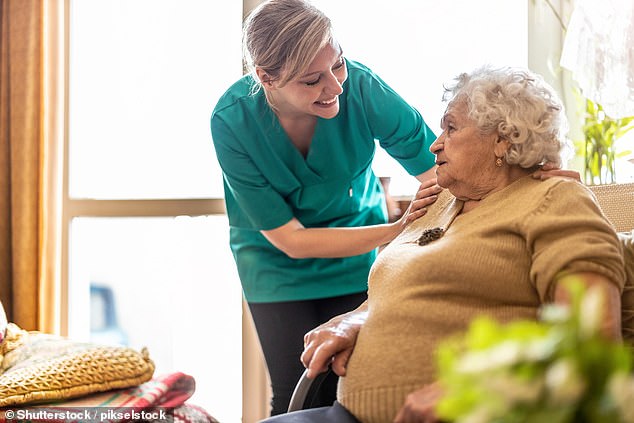 Some 542,000 people were waiting for care packages, assessments, or direct payments and reviews at the end of April, up by 37 per cent from the six months before, says the group.

CNN, which represents 36 councils in county areas covering 25million people, says services are under pressure ahead of reforms next October, and urged the new Government to confirm further investment in adult social care in this week’s emergency budget.

Although the 1.25 per cent National Insurance hike to fund both the NHS and social care looks set to be axed, the new Truss Government has indicated support for next year’s planned shake-up of the system.

Today, new Health Secretary Thérèse Coffey is due to lay out plans for the NHS and social care this winter, while on Friday the Chancellor Kwasi Kwarteng will hold a mini-Budget expected to cover taxes and support to get people through the cost of living crisis.

What is the social care plan?

However, experts say there is a flaw in the plan and that poorer people could still spend most of their assets including their home if they need care, while the better off would forfeit a relatively small chunk of their wealth.

The new lifetime spending cap will also be based on some, but not all, of people’s private contributions towards care, rather than on their total costs.

It will exclude anything local authorities deem unnecessary or not ‘eligible’ for your care, any financial support they provide towards your costs, top-up payments you might make for premium amenities like better rooms, daily living or ‘hotel and accommodation’ costs, and any spending on care before October 2023.

The County Councils Network says longer waits for care packages, assessments and payments are affecting hospital discharges, where people are medically fit to leave hospital but this is delayed because of a lack of available care in the community.

It says that at the end of July, around 13,014 or 10 per cent of all hospital beds were occupied by those who could be discharged, up from around 10,400 last November, with many of these delays attributable to the adult social care system.

‘The new Prime Minister’s commitment during the leadership election to spend more money in adult social care was a welcome recognition that the care system is significantly underfunded and that this has a knock-on impact on the NHS,’ says councillor Martin Tett, the organisation’s health and social care spokesperson.

‘Services were already under pressure ahead of the Government’s reforms being introduced next October, and councils were not set to receive any funding to address these immediate problems.

‘However, the situation is now worsening with rising inflation meaning councils face an extremely challenging 18 months and increased costs of £3.7billion this year and next.

‘We face the perfect storm of staffing shortages, fewer care beds, and higher costs – all of which will impact on individuals waiting for care and discharges from hospital.

‘Whilst the perception is that social care is fixed with reform on the way, the experience of those who require care now is anything but. We urge the government to confirm that social care will receive a much-needed funding boost as soon as possible.’

A Government spokesperson says: ‘The Health and Social Care Secretary is focused on delivering for patients and has set out her four priorities of A, B, C, D – ambulances, backlogs, care, doctors and dentists.

‘We will continue to invest the same amount into health and care overall as was set out under the levy, and in the immediate term, we have made an extra £3.7billion available to councils this year – including £1billion to spend specifically on social care.’