The lab-confirmed case comes a week after the strain was first detected in the state, in a Connecticut resident who was hospitalized in New York City.

Believed to be more contagious and capable of weakening vaccines, the South African variant first surfaced in the US in two South Carolina adults in late January, and has since appeared in at least nine other states including Illinois and California.

‘With the discovery of a case of the South African variant in the state, it’s more important than ever for New Yorkers to stay vigilant, wear masks, wash hands and stay socially distanced,’ Cuomo said. 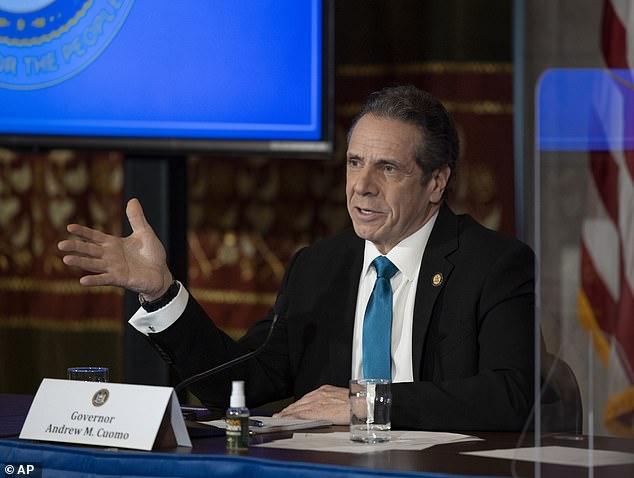 New York governor Andrew Cuomo, pictured at the state capitol on Friday, announced that a resident of Long Island had tested positive for the South African virus strain 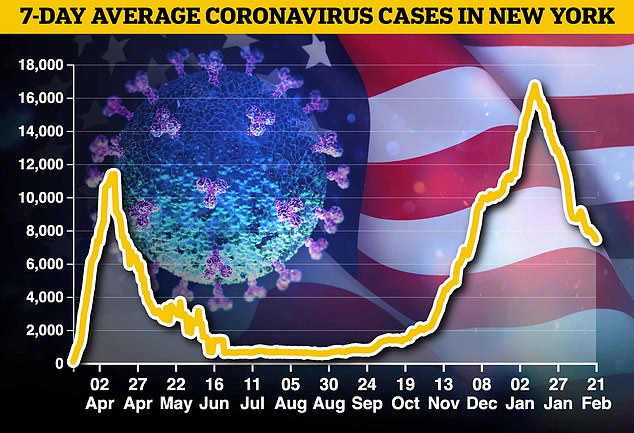 This graph shows average daily cases in the whole of New York state, including NYC. The infection rate has fallen in recent weeks

No details were given about the patient except that they live in Nassau County and gave a sample which was found by two New York labs to contain the variant.

Nassau County’s executive Laura Curran said that ‘we don’t believe this variant is more deadly but it may be more contagious’.

‘The best response is to continue tried and true precautions: wear a mask, avoid social gatherings, stay home/get tested if sick,’ she said.

New York joins a list of at least nine states which have reported cases of the strain, also known as the B1.351 variant and first discovered in Nelson Mandela Bay last year.

Last week Cuomo said a Connecticut resident who was a patient at a New York City hospital had tested positive for it, but said there was no known spread in the state.

Massachusetts also announced last week that a case had been found in a woman in her 20s who had not travelled abroad.

Concern about the South African strain comes partly from the fact that trials suggest it reduces the efficacy of the currently available Covid-19 vaccines.

South Africa itself put vaccinations with the AstraZeneca jab on hold after trial results showed it had only 22 per cent effectiveness in halting mild or moderate disease caused by the variant, with no data on whether it prevented serious illness. 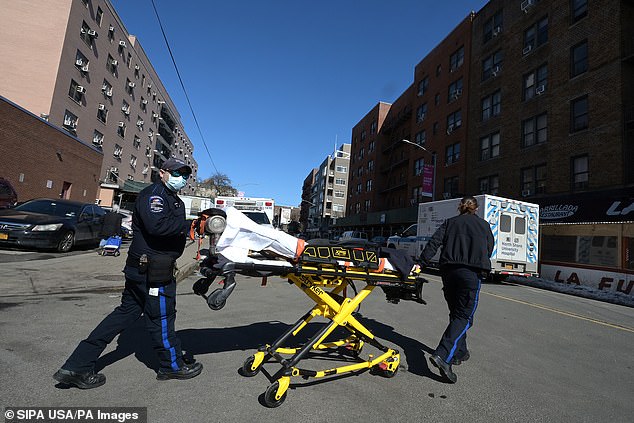 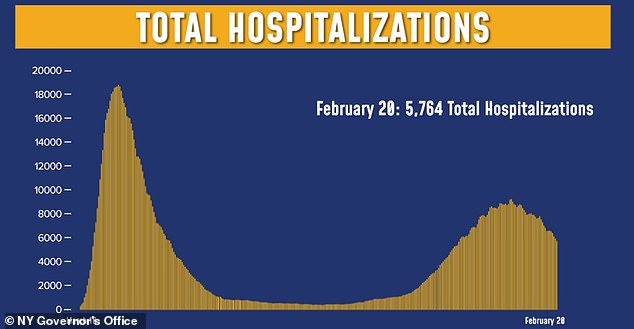 Pfizer and BioNTech said the variant might reduce the level of antibodies produced by its vaccine, but it was not clear whether or how much it reduced effectiveness.

BioNTech has previously said that it could adapt its vaccine in six weeks if necessary to face the dangers of a new strain.

New York has also seen cases of the UK variant, but not the Brazilian strain which has caused similar concern in Europe and elsewhere.

There was also better news for New Yorkers as Cuomo said the state’s rate of positive tests had fallen below three per cent for the first time since November 23.

The number of current hospital patients also dropped, from 5,977 to 5,764, while the tally of ICU patients was unchanged at 1,162.

Cuomo said that ‘we are in a race right now – between our ability to vaccinate and these variants which are actively trying to proliferate – and we will only win that race if we stay smart and disciplined.’

The governor has been under fire in recent weeks over nursing home deaths in New York which Cuomo has admitted were excluded from official figures.

The true number of nursing home deaths is now around 15,000, up from the 8,500 previously disclosed. 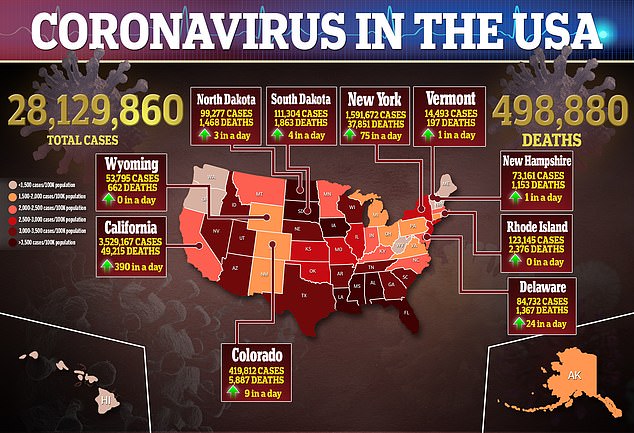 The US is closing in on the grim milestone of 500,000 confirmed Covid deaths, with New York accounting for more than 40,000 of those after its disastrous outbreak last spring

Although the deaths were accounted for in New York’s overall death totals, they were not ascribed to care homes – underplaying the seriousness of the outbreaks there.

The undercount was especially significant because Cuomo’s office had directed in March that nursing homes should not deny admission to a patient because they had Covid-19, a policy that was rescinded two months later.

The governor has blamed staff entering nursing homes for spreading the virus to the vulnerable population, not patients brought in with Covid-19.

Last week it was revealed that a Cuomo aide told New York legislators that the true picture of nursing home deaths wasn’t revealed for fear it would be used against the governor by Donald Trump’s Justice Department.

Melissa DeRosa, who made the comments, has estimated that New York nursing home residents represent 40 per cent of the lives lost this winter

Outrage over the nursing home deaths has tainted Cuomo’s image after his leadership during New York’s disastrous first outbreak last spring propelled him into the national spotlight and led to a book, American Crisis, released last summer.