Millions of students face a rise in living costs far in excess of the slight increase in support from maintenance loans when the new academic year begins.

The rising cost of rent, food, energy and train fares, as well as books and other student basics, mean that many will be squeezed, with those in private rental accommodation set to be hit particularly hard, according to new research.

The ‘student inflation rate’ for those in student digs already hit 9 per cent in the year to June, according to research by interactive investor, but for those renting from a private landlord, prices shot up by an even larger 12 per cent. 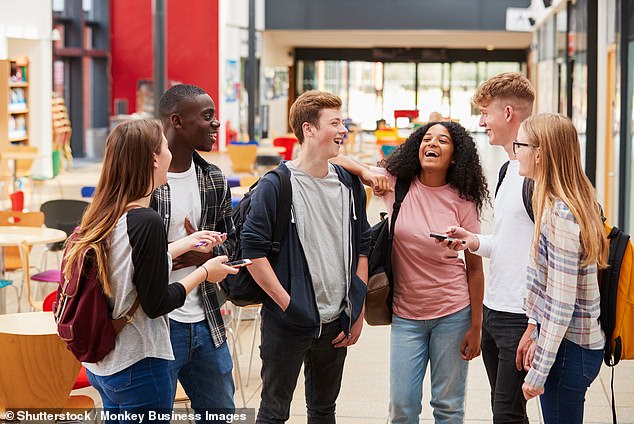 Students from England living away from home outside London will get a maximum maintenance loan of £9,706 a year from September, or around £810 a month

In comparison, maintenance loans for English students have risen by just 2.3 per cent, or £218, from the last academic year.

Students from England living away from home outside London will get a maximum maintenance loan of £9,706 a year from September, or around £810 a month.

Maintenance loans are calculated according to household income, where a student will be living while studying and where in the UK they normally live.

But with private rents and student accommodation prices shooting higher, the loan will barely cover those costs, or fall short in some cases.

The average annual cost for student accommodation in the UK stood at £7,374 in December, an increase of 4.4 per cent, while in London it was higher at £10,857, according to data from the National Union of Students.

Private rents have risen much faster, spelling more financial pain for those looking for a room to rent in house shares.

Including London, private rents hit almost £1,000 a month in May – an increase of 11 per cent.

Excluding London, they were up 9.1 per cent to an average of £830, according to May figures from Zoopla.

Interactive investor’s data is based on Zoopla statistics, rather than overall student rent figures published by the NUS, because they are more reflective of the higher costs weighing over students in the coming months.

On top of rental expenses, students face rising costs for most other basics.

Like everyone else, soaring energy bills were the biggest inflation driver for students, up 70 per cent in the year to June, ahead of the cost of running a car, which was up 21 per cent.

Going out has become more expensive, with the cost of going to the cinema, gigs and theatre up 17 per cent, while sport tickets were up 10 per cent.

Eating out has gone up in price by 7 per cent, and even takeaways have got 10 per cent pricier than a year ago, according to the research.

The cost of food jumped by 8 per cent and train prices are up by 5 per cent, while books saw a more modest uptick of 3 per cent. Only laptops fell in price, by 4 per cent. 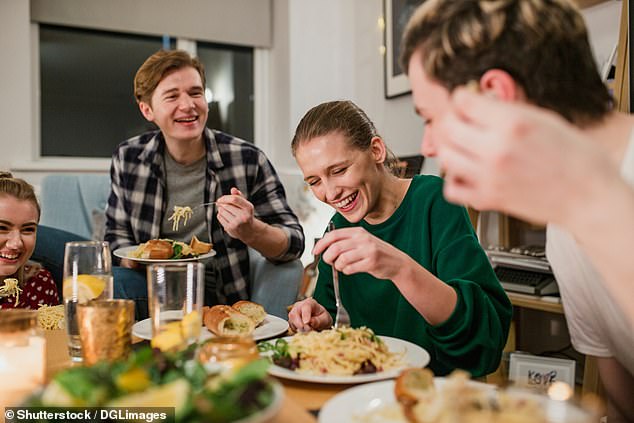 More dinners at home: Eating out has gone up in price by 7% and takeaways have got 10% pricier than a year ago, while the cost of food has risen by 8%

Myron Jobson, senior personal finance analyst at interactive investor, noted that students will be less likely to rely on financial help from their parents, who will also face increased costs this winter.

‘The reality is a large number will need to work part time to support themselves,’ he added.

Those who have secured student accommodation will at least be spared massive hikes in energy bills.

‘It is unlikely they will raise rents in the middle of the semester to weather heightened costs,’ Jobson said.

However, students who live in a shared house are likely to be more affected.

‘Student households are likely to find it tougher than most as they have limited disposable income and spend a large proportion of their budget on essentials with little wriggle room,’ said Alice Guy, personal finance expert at interactive investor.

The rising costs are also a concern for those who are about to graduate, who may be forced to go back living with their parents.

‘Graduates following the familiar pattern of leaving student accommodation to a form of private residence will have a host of costs to cover, including rent, rising food, and energy bills,’ Jobson said.

‘As such, moving back to the family home is becoming more of a valid option for many graduates.’

Myron Jobson, senior personal finance analyst at interactive investor, has put together some advice for students.

Budgeting is integral when it comes to keeping your financial house in order. It allows you to plan how much you will spend or save each month as well as track spending habits.

It’s worth keeping a spreadsheet of your own spending habits. There is a plethora of budgeting templates available for free online as well as apps to help you on your way.

The rising cost of living means we are saving less to maintain current levels of spending, so be prepared to make tweaks to your budget as inflation continues to rise.

Once you have a better idea on how you spend your money, you can explore ways to help you live within your means.

Look out for exclusive student deals

There are loads of deals exclusively available to students, to help make their money go further. Such deals tend to be a percentage off the total price but could also include offers such as free trials or buy-one-get-one-free.

Available student discounts are not always made obvious by companies, so often students need to ask the question.

Save on food bills

Shop around for the best deals – especially for high ticket items. Even simple things such as opting to purchase a store brand equivalent of traditional larder products can help to cut down the cost of groceries.

Consider buying items in bulk so you are not constantly spending as prices continue to climb. It is also worth taking advantage of supermarket loyalty schemes – such as Tesco Clubcard and Nectar card – which can give you access to unlock big discounts and other exclusive rewards.

Shop around for the best deals

You won’t know whether you are paying over the odds for things unless you shop around for the best deals. For example, if you’ve been with a broadband provider for a while, it is likely that any introductory offers will have expired, and you might be paying more than you need to. The same goes for mobile phone contracts. Shop around to see if you can get a better deal.

Students struggling financial needn’t suffer in silence. Don’t be afraid to ask for support. There are advice and hardship funds are available at several universities. There are additional funds for those who need extra financial help as well as for students with children or dependent adults and students with disabilities. Students can also access cost-of-living support funds distributed by local councils to support residents struggling financially.